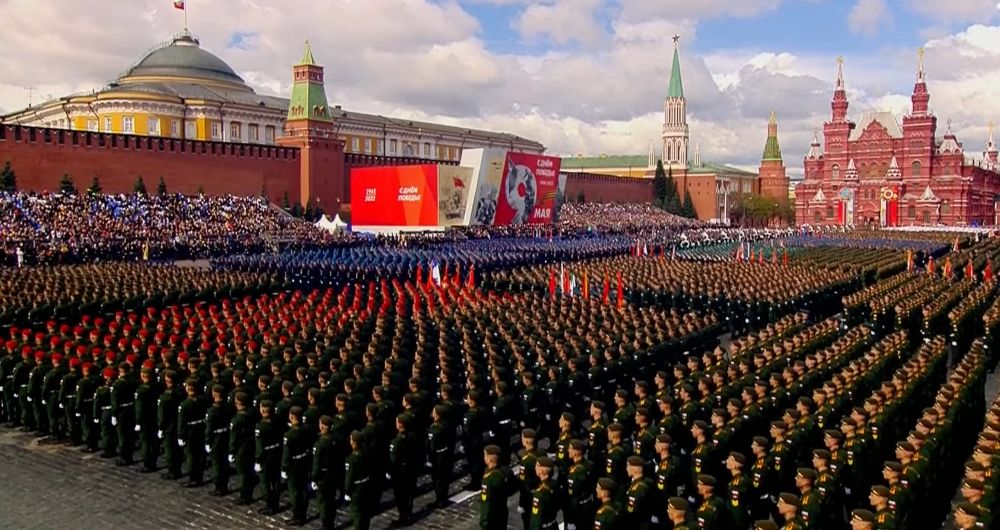 No news is likely good news in Russian President Vladimir Putin’s failure on Victory Day to signal the next moves in his thwarted offensive to conquer Ukraine.

With no victory to declare as his war against a sovereign neighbor enters its 11th week, Putin instead used Monday’s anniversary of the 1945 Allied defeat of Nazi Germany to accuse the United States and NATO of moral corruption and collusion with what he portrays as a “neo-Nazi” regime in Kyiv.

Putin casts his invasion of Ukraine as a campaign of liberation to free Ukraine’s 44 million citizens from resurgent fascists and the influence of Western adversaries aiming to station nuclear missiles on Russia’s border.

Rumors and speculation had been circulating for weeks that Putin would mark Victory Day by declaring all-out war on Ukraine and national mobilization to replenish massive Russian troop losses from what has so far been characterized as a “special military operation,” not a war. Other analysts predicted the Kremlin leader would proclaim victory in clearing a land bridge along Ukraine’s southeastern coast to link two Russian-occupied eastern provinces with the Crimean Peninsula seized and annexed to Russia in 2014.

Neither success nor failure was claimed in Putin’s uncharacteristically brief speech at the annual parade of tanks, armored vehicles, and missiles across the cobblestone expanse of Red Square flanking the Kremlin. A planned combat aircraft flyover to culminate the show of military might was cancelled, allegedly because of weather although the skies were clear.

Putin’s switch to a narrative of Russia as victim of Western perfidy suggests he recognizes that ramping up his armed forces to the level necessary to take significant territory from Ukraine would take too long, cost too much and risk turning public opinion against the war that has brought condemnation and economic sanctions on Russia.

Any claim to have achieved Kremlin objectives of uniting Ukrainian regions seized eight years ago would have been difficult to substantiate. Russian forces have only a tentative grip on the few Ukrainian towns and small cities newly occupied in the southeast. They have yet to take any major city despite indiscriminate shelling of civilian areas throughout the country and the estimated loss of 15,000 Russian soldiers since the Feb. 24 start of the invasion.

Instead of bombastic threats against Ukraine and NATO, Putin praised Russians for their patriotism and moral superiority, contrasting his countrymen with decadent Westerners he casts as under the spell of neo-fascism.

“We will never give up our love for the country, faith, traditional values, ancestral customs and respect for all peoples and cultures. As for the West, it seems to be determined to cancel these millennia-old values,” Putin told parade spectators, who for the first time in recent memory included no foreign leaders or prominent guests.

“This moral degradation paved the way for cynical falsifications of the history of World War II, attempts to incite Russophobia, glorify traitors, mock the memory of their victims, and wipe out the bravery of those who fought and suffered for the victory,” he warned, equating Ukraine and its allies with the vanquished Nazis of World War II.

Putin’s reach for propaganda instead of aggressive rhetoric can be seen as a necessary pivot in the face of his military’s humiliating failures. Despite terrorizing civilians and credible reports of retreating Russian troops committing war crimes, Putin’s offensive failed to take any major city. The war has laid waste to the strategic port of Mariupol in a two-month-old siege still underway to rout 2,000 Ukrainian holdouts hunkered down in underground bunkers and tunnels of the sprawling Azovstal steel complex.

Putin claimed victory in Mariupol more than a week ago, stirring speculation he would try to present capture of the key port on the Sea of Azov as success in uniting his seized territories and securing resupply routes.

Control of Mariupol would have given the Kremlin the added advantage of cutting off Ukraine’s access to the Azov and Black Seas through which Kyiv ships vital grain supplies to the rest of the world. Media and satellite photos of Mariupol’s devastation make clear the port and steelworks have been rendered useless to either side, reduced to charred rubble evoking images of the WWII Allied forces’ carpet bombing of Dresden.

Mariupol was home to 450,000 before Putin’s invasion. Most of the city’s women, children and elderly fled to safer havens, joining an exodus that has sent six million Ukrainians to foreign countries and displaced another eight million internally, according to the World Food Program.

While Putin was constrained in his ability to claim success in the war that has made Russia an international pariah, Ukrainian President Volodymyr Zelensky heralded his country’s fierce resistance to the Kremlin’s aim of recovering by force of arms the former Soviet empire.

“On the Day of Victory over Nazism, we are fighting for a new victory. The road to it is difficult, but we have no doubt that we will win,” Zelensky said in an upbeat video address on the holiday marking the end of a war in which eight million Ukrainians died during the German occupation.

Zelensky, a comedian who played a president on the Ukrainian sit-com “Servant of the People” before winning election on an anti-corruption campaign in 2019, has soared to international acclaim with his inspiring leadership of Ukraine’s vastly outnumbered and outgunned forces. What began as an invasion the Kremlin expected to overrun Kyiv in 48 hours bogged down against the defense of a population unwilling to surrender to Kremlin domination after 31 years as an independent, aspiring democracy.

Ukrainian government sources claim Russian troop losses exceed 25,000, based on a reportedly intercepted call to Moscow from the Ukrainian front. Russia has lost more than 3,500 armored vehicles — destroyed, damaged, abandoned or captured, according to a European defense monitoring group.

Putin’s apparent pause to consider his options is a hopeful sign that he is not desperate enough — at least not yet — to escalate his way out of self-inflicted disaster with a nuclear or chemical weapons attack on Ukraine or perceived enemies in the West. He seems mindful of the risks to his power and authority if he plunges deeper into a doomed quest to restore Russia’s imperial or Soviet status as a formidable world power.

Strategically misguided but tactically adept, Putin has repeatedly pulled back from the brink during his 22 years in power by freezing campaigns of territorial seizure at a point where he and his inner circle believe they can hold the territory already grabbed.

That tactic succeeded in Georgia where Russian troops have maintained control over the provinces of Abkhazia and South Ossetia since a short war in 2008 and in Ukraine’s Donbas and Crimea regions that fell to Russian forces in the chaotic aftermath of the Maidan rebellion that drove out Putin ally Viktor Yanukovych from the Ukrainian presidency in February 2014.

Ukraine’s armed forces were ill-equipped and poorly trained eight years ago, a vulnerability the elected leaders of the country have countered since the earlier losses with help from U.S. and European allies.

If Putin remains cognizant of the limited paths out of his bungled offensive, he may quietly scale back the operation that began with 190,000 troops arrayed around Ukraine’s northern, eastern, and southern borders.

What may prove different this time to freeze the conflict is the determination of Ukraine’s defenders to drive out the invaders and recover the newly Russian-occupied territory as well as the stolen Donbas and Crimea areas from a weakened and isolated Russia.

Carol J Williams
Carol J. Williams is a retired foreign correspondent with 30 years' reporting abroad for the Los Angeles Times and Associated Press. She has reported from more than 80 countries, with a focus on USSR/Russia and Eastern Europe.
Previous article
Exit Stage West: A Ukrainian Soprano’s Escape
Next article
Mayor Harrell Doesn’t Suck so Far: So Here are Eight Suggestions