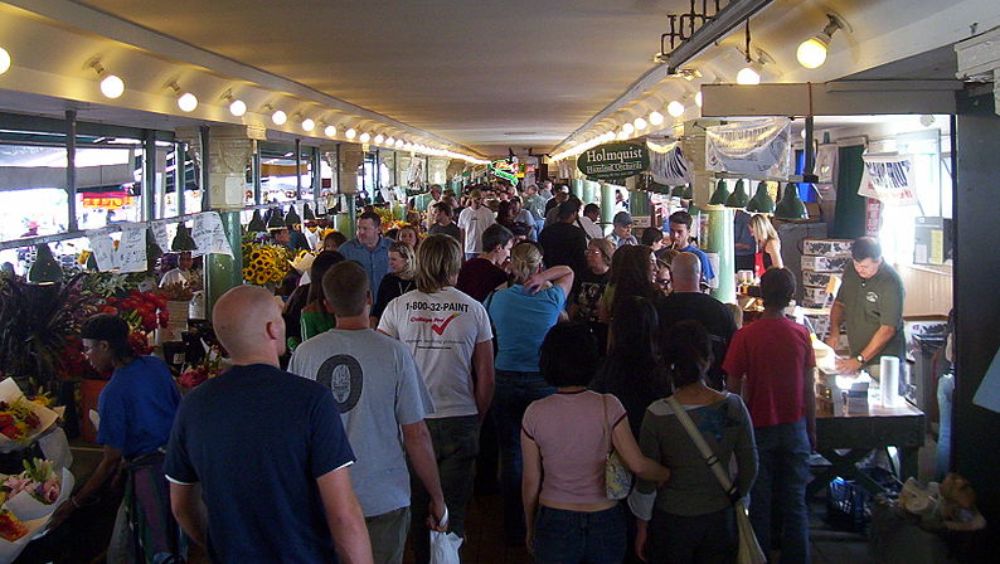 Recently my Post Alley colleague Jean Godden stroked one of the town’s third rails: whether to ban cars from Pike Place in the Market. She argued that the Market doesn’t need fixing, certainly not this traffic fix. I disagree about the need for fixing, and agree about avoiding this particular third rail.

I got to know the Market and its problems from two occasions of working there. After I left Seattle Weekly in 1997, I shared a writers’ office in the Corner Market. Three years ago, I served as executive director of Folio: The Seattle Athenaeum (a nonprofit membership library) in the Economy Market (above DeLaurenti). I got involved in helping the Market Public Preservation and Development Authority figure out possible fixes, notably how to attract more Seattleites to “their” market.

When Folio moved to the Market in 2018 and we ran the regulatory gauntlet, I got my first glimpse of how the Market wanted to move forward. Folio got in because we were a library aimed at locals, not tourists, were open at night for events (drawing people after hours), and enhanced the Market’s reputation for bookstores. I also encountered the Market’s obstacles to retail success: elaborate rules about signage, no ability to expand, parking issues, short on storage, clunky marketing, too few major draws for locals.

Working there, I happily discovered some of the secrets of the Market’s appeal. It is really a medieval village, governed by mysterious informal practices, “a mixture of anarchism and Bolshevism,” as the saying goes. It’s a genuine community, so you help other stores with discounts and deals for fellow Market folk, free breakfasts for the poor at The Atrium Kitchen, pitching in for special events.

The Market is hard to gain admission to as a business — for one thing, you can’t have prior retail locations — but the rental rates are a bit below-market, and the place is safer than the rest of downtown because it has its own effective security force.

You learn to avoid the main tourist shops with their higher prices, buying fish at Jack’s Fish Spot, for instance, or fleeing tourists by going to The Virginia Inn, and using First Avenue for a quicker north-south passage, one less jammed with slow-moving tourists.

I learned that the Market has an arcane governance that makes it almost impervious to change. But it really does need to change some of its structural problems. It was not built to handle the crowds it now has, at least in summer. There are too many tourists, particularly when the cruise ships are in town, and too many businesses that only survive on those summer inundations.

It’s not really a “farmer’s market” now, since the idealistic managers of the place created competition by encouraging the many wonderful and much more negotiable neighborhood markets. Tourists tend to buy flowers for hotel rooms or an apple to munch, while farmers make much more money from gourmet buyers at the neighborhood markets.

The main problem is getting Seattleites to come to the Market. They do come as newcomers or when relatives are in town, but too few make it a regular habit. Signage is confusing, tourists overwhelm the place, parking is mysterious and pricey, and there are few places to sit down without paying.

I can see that restricting cars along the main spine, Pike Place, might add some outdoor cafes and splashes of color. But I think that touching off a civil war among the many empowered tribes (merchants, craftspeople, preservationists, seniors, flower vendors) was the last thing the delicate, self-regulating equilibrium of the Market needed or could survive. Better than poking that beehive is the path of gradual evolution, benign neglect, and short tests — as happened during the pandemic when some restaurants moved outdoors to stay alive.

My fear is that the Market has been swallowed up by the tourist economy, now dominating all along the western edge of our downtown. This monoculture will get worse when the Waterfront Park opens, tying the Market to the Aquarium. Or when the First Avenue trolley links up Pioneer Square and Seattle Center — a  tourists’ river. Given all the attention to how we can revive downtown, however, this is no time to tap on the brakes of the visitor market.

So, what does that leave in the “fixes” basket? One is to think outside the full-up historic Market and put more attractions in the nearby Market neighborhood, such as Western Avenue and east of First Avenue. Another is to keep inserting draws, like Folio, that attract frequent-using Seattleites, residents, and downtown workers. Examples: theaters (by saving the Showbox), galleries, music, incubation labs, and maker spaces..

Having listed those possible fixes, I realize that the real genius of the Market is that it fends off such schemes and takes its time and evolves organically and surprisingly. All this is enough to make a Burkean — go slow, don’t impose ideological schemes — out of this fidgety urbanist. So I say: keep the cars and maddening vans on Pike Place, and vow to visit the Market more often.

David Brewster
David Brewster, a founding member of Post Alley, has a long career in publishing, having founded Seattle Weekly, Sasquatch Books, and Crosscut.com. His civic ventures have been Town Hall Seattle and FolioSeattle.
Previous article
Lessons Learned: Facing Up to How We’re Dealing with COVID
Next article
The Long, Remarkable Life of Harriet Bullitt