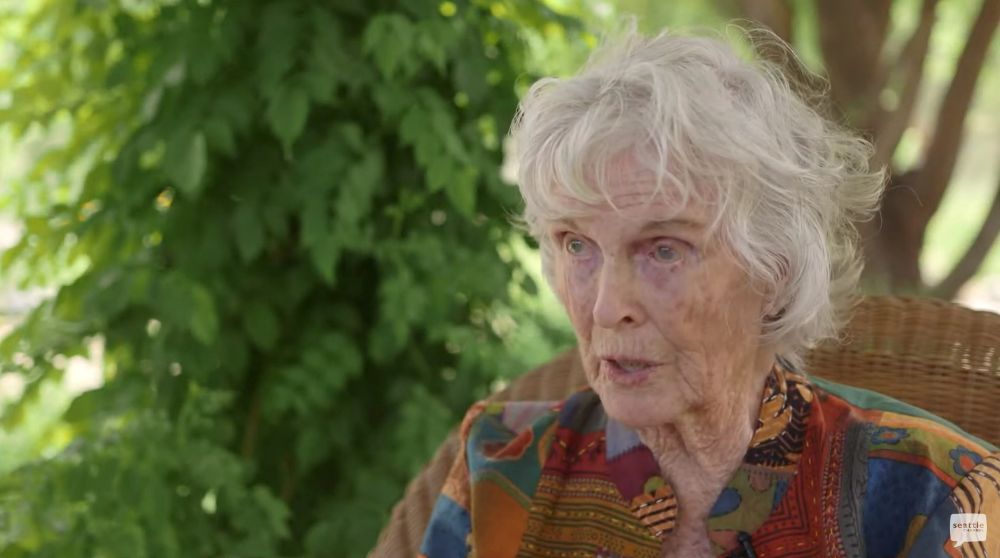 The last decade of her life, which ended at age 97 on Saturday morning, saw Harriet Bullitt looking forward as well as celebrating what she created, enabled, and is leaving behind to benefit both sides of the Cascades and beyond.

Harriet sat on the dais, to the acclaim of politicians, with dedication of the greenest commercial building in the world, to which the Bullitt Foundation committed a third of its assets.  The Bullitt Center became the first six-story building sustained by sunlight on its roof. Once viewed suspiciously by banks, it has become a commercial success and model.

Ms. Bullitt welcomed guests to the opening of the Snowy Owl Theatre, a 240-seat multipurpose performance hall beneath the Wenatchee Mountains outside of Leavenworth, adjoining the Sleeping Lady Mountain Resort she created in what was formerly a Catholic Youth Organization camp.

Bullitt stood with close friends on an old riverbank, as the Leavenworth National Fish Hatchery put water back into the old channel of Icicle Creek so salmon could again naturally spawn. Restoring the channel was a cause that began with her mother, Dorothy Stimson Bullitt. The founder of King Broadcasting brought nearby property in the 1930s and built Copper Notch lodge.

Bullitt took to the pitching mound, at age 88, to become the oldest person to throw out the first ball at a Seattle Mariners game.

Age was never a Bullitt obstacle. Dorothy Bullitt rafted the Grand Canyon at age 89, sitting in front of the raft as it ran the famously noisy and formidable Lava Falls rapid.  Brother Stim Bullitt, in his 80s, scaled Illusion Dweller in Joshua Tree National Park.  Harriet met her fourth husband Alex Voronin, a Russian more than three decades her junior, at a flamenco dancing event.

“She will truly be missed, but her legacy lives on in some of the most beautiful places in Washington state she helped protect and in each one of us she has touched,” Hilary Franz, State Land Commissioner, wrote in a Facebook tribute.

Behind the velvet glove of a considerate, understated Harriet Bullitt lay a steely determination. “One of my fondest memories is the time we skied through the defunct CYO camp she was thinking about turning into an eco retreat and concert center: She pulled that off bigtime, as well as getting rid of the dam nearby through sheer force of will,” said Elliot Marks, for years head of The Nature Conservancy in Washington.

She was a philanthropist who enabled the dreams of others.  The construction of a “living building,” able to harness the outside environment in service of those working inside, was a longtime dream of Bullitt Foundation President Denis Hayes. He needed to show it would work, borrowing the movie theme: “Build it and they will come.”

Wilfred Woods, longtime Wenatchee World publisher, held the idea of an arts center in north Central Washington. He and Harriet joined to make it happen, two people who probably never voted the same way.  “Wilfred, you old rascal, you got me into this,” she said on dedication night.  The Icicle Creek Center for the Arts offers indoor and outdoor venues, hosts a summer music festival, and trains musicians.

Bullitt was inspired to name the theatre after taken by photographer Paul Bannick (along with husband Alex and sister-in-law Tina Bullitt) on a mid-winter Grays Harbor trip to see a Snowy Owl. A picture by Bannick, showing a Snowy Owl against a backdrop of Boundary Bay and Mt. Baker, decorates the theater lobby.

“For years there was a lynx statue at Sleeping Lady that we gave Harriet for help in saving the Loomis Forest,” wrote Mitch Friedman of Conservation Northwest. The 25,000 acre forest on the eastern edge of the Cascades in Okanogan County was ransomed from the state Department of Natural Resources as it was about to be clear cut. (Paul Allen put up crucial dollars.)

Up the Icicle Road near the mouth of Chatter Creek stands a beautiful forest of Ponderosa Pine, in a private inholding surrounded by national forest land. When word went out that a Moses Lake megachurch planned to develop the land and chop down the trees, Harriet Bullitt swooped in with a successful purchase.

The control of King Broadcasting’s TV stations passed to Harriet and Patsy with the death of Dorothy Bullitt, also at age 97, in 1989. They sold the broadcast empire to the Providence Journal in 1991, and committed their mother’s share of proceeds to environmental works of the Bullitt Foundation. Hayes, organizer of the original 1970 Earth Day, was brought in to head it. The foundation would ultimately give out $200 million.

The Bullitts were famous water rats. Dorothy bought and refurbished an old tugboat, once did a water journey across North America, and in her 80s helped paddle a long canoe around Lopez Island. Harriet likewise. “She and her young Russian husband kindly took me out on their live-aboard tugboat when I first started my Seattle P-I column,” recalled journalist Susan Paynter. She was “one of the very first advocates for the protection of killer whales,” said ex-Secretary of State Ralph Munro.

The Bullitt Foundation committed itself to cleaning up pollution in the Salish Sea and its tributaries and protecting streams from a multiplicity of threats.  It seeded a Northwest office for American River – which publishes an annual list of the most endangered waters of the U.S. — and supported such groups as People for Puget Sound and the Georgia Strait Alliance.

Sleeping Lady has become a venue of both good music and plotting good works. “We brought the entire board of the Society of Environmental Journalists to Sleeping Lady for our retreat: She was so welcoming,” said TV reporter Jeff Burnside.  The YMCA for years held its planning retreat on the Icicle. “Harriet brought cakes to give us an inspired welcome,” recalled board member Monica-Niki Fox Elenbaas.

The Bullitt Foundation is winding down and will cease giving grants in 2024. It will maintain the Bullitt Center as a “gift to the Northwest environmental community” and provide office space to green groups “in perpetuity at significantly below market rates.”

Similarly, Bullitt has long planned for the post-Harriet future. She and Patsy Collins held onto classic KING-FM when the family sold the TV stations, later spinning it off as a non-profit. In 2019, the Sleeping Lady resort was gifted to the Icicle Fund, Harriet’s primary philanthropic group, which supports arts and environmental giving as well as the natural and cultural history of North Central Washington.

She even did a kind of early sendoff, inviting guests to overnight at Sleeping Lady for a 90th birthday bash held when she had just turned 89. A touching, funny tribute was delivered by husband Alex, along with fulsome words from Gov. Jay Inslee.  In this case, even politician praise was understated.

“She is dancing in heaven,” said State Sen. Linda Evans Parlette, R-Wenatchee, one (of few) Republicans to gain Harriet’s support.

Joel Connelly
I worked for Seattle Post-Intelligencer from 1973 until it ceased print publication in 2009, and SeattlePI.com from 2009 to 6/30/2020. During that time, I wrote about 9 presidential races, 11 Canadian and British Columbia elections‎, four doomed WPPSS nuclear plants, six Washington wilderness battles, creation of two national Monuments (Hanford Reach and San Juan Islands), a 104 million acre Alaska Lands Act, plus the Columbia Gorge National Scenic Area.
Previous article
Pike Place Market Needs Fixing But Will Resist Attempts to Fix It
Next article
Trust No One: The Toxic Brine of Misinformation