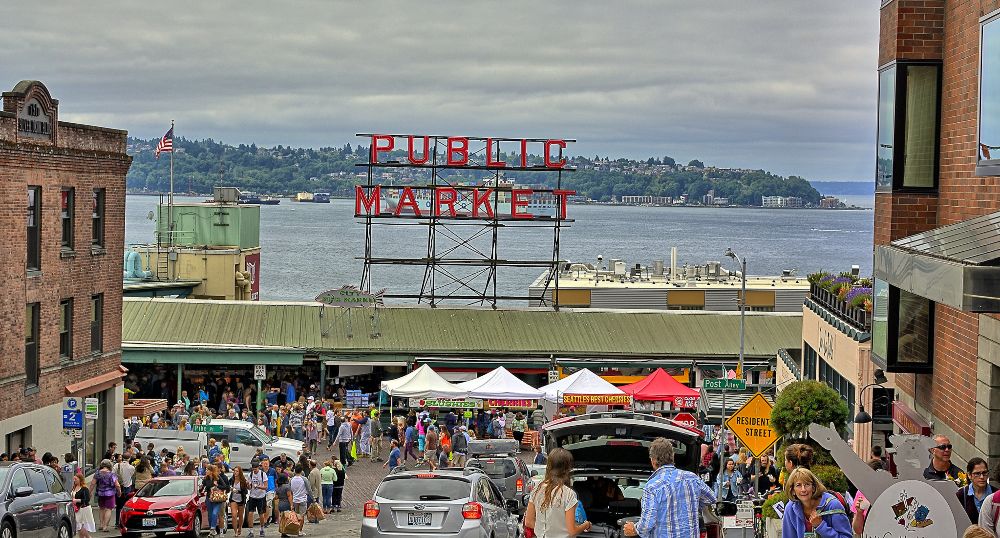 The Case Against Banning Cars in Pike Place Market

The bustling Pike Place Public Market is back in the spotlight again. Shining that unwise spotlight is Seattle City Councilmember Andrew Lewis, who represents District Seven (downtown, Queen Anne and Magnolia). Just before Christmas, Lewis said he planned to conduct workshops this year, a “collaborative process with stakeholders to bring about change at the Market.”

Lewis proposes taking traffic off Pike Place’s historic cobblestone blocks, which run north-south through the Market. Acknowledging that the Market is one of the city’s greatest treasures, he says it “deserves to be elevated into one of the world’s great pedestrian spaces.”

Lewis argues “great cities all over the world” have pedestrian plazas at their heart, citing two U. S. cities: Boulder, Colo., and Charlottesville, Va. He imagines Pike Place becoming “a festive bazaar of outdoor dining, coffee sipping, and people watching, free of cars and noise.”  Although high on his workshop idea, Lewis wants to avoid what he calls “the Seattle Process of endless conversations and stalled progress.”

This seems nonsensical. In other words, let’s have workshops and “a collaborative process,” but heaven forbid that we want to deal in “Seattle Process.”

By contrast the Market radiates activity. In the daytime the Market is abuzz with customers and merchants, buskers serenading, fishmongers slinging salmon, trucks loading and unloading. Nearly 115 years after its beginnings, the Market continues a happy, slightly chaotic jumble of vendors, pedestrians, slow-moving cars and delivery vehicles. The Pike Place Public Market is not some tourist bureau come-on; it’s the real thing.

Circulation and access are life blood to the Market’s 500 small businesses and to ancillary services like the Health Clinic, Day Care, and Foodbank. Circulation and ready access matter also to the transport of shoppers and visitors, the pickups and deliveries of Door Dash and Uber Eats. Why anyone would want to cut down on the Market’s success is a mystery.

In his defense, Lewis cites a poll taken by Seattle Neighborhood Greenways and Northwest Political Institute. It purports to show that 81 percent favor removing vehicles from Pike Place. However, one has to ask how many of those 81 percent work at or patronize the Market.

If Lewis intends to push through his workshops, it will be essential to consult with vendors, residents, restaurants, bars, hotels, drivers, security and the agencies that actually run the Market: the Market PDA (Preservation and Development Authority), the Historical Commission, the Design Commission, the Constituency, the Merchants Association, and the Market Foundation. Also, the groups that came to the Market’s rescue in times past, such as the Friends of the Market and Allied Arts.

Among those rescuers is former Seattle councilmember and port commissioner Peter Steinbrueck, who worked to save the Market from New York investors in the 1990s. Peter reminds us that his dad, original Market savior Victor Steinbrueck, was clear about the need to keep the street open to cars and people. Since cars have to yield to pedestrians, traffic is always slow, often stalled. Peter calls it “almost self-regulating.”

In a recent Seattle Times op-ed, Peter and his colleagues Tom Graff of Allied Arts and Ernie Dornfeld of Friends of the Market, concluded: “Rather than fixing what doesn’t need fixing, let us instead bring our energy and resources to help the rest of downtown return to health and vibrancy.”  I say Amen!

Jean Godden
Jean Godden wrote columns first for the Seattle Post-Intelligencer and late for the Seattle Times. In 2002, she quit to run for City Council where she served for 12 years. Since then she published a book of city stories titled “Citizen Jean.” She is now co-host of The Bridge aired on community station KMGP at 101.1 FM. You can email tips and comments to Jean at jgodden@blarg.net.
Previous article
Poison Always Leaves a Trace: Navalny Documentary Wows Opening-Night SIFF Audience
Next article
Clyde Ford’s New Book: The Role of Black Labor in Building White Wealth and Power