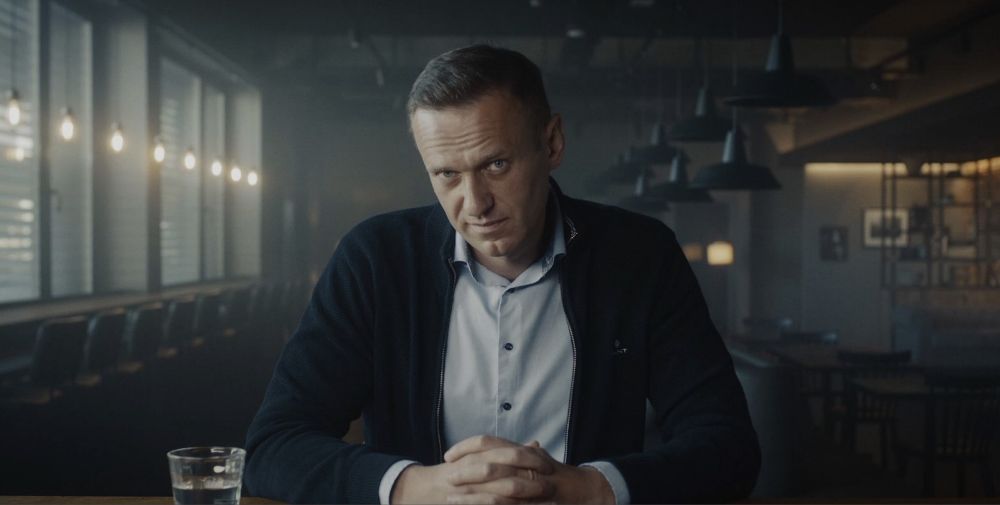 The documentary “Navalny,” which opened Seattle International Film Festival’s 48th season in a gala blast Thursday at the Paramount, plays like those tightly-scripted espionage plots streaming on nearly every platform these days. Except that this one is real.

In fact, it would be hard to imagine a greater example of the power of film, the essence of what SIFF is all about. “Navalny” touches nerves already jangled by the Russian invasion of Ukraine. And its power was certainly multiplied for the SIFF habitues back in a theater in person for the first time after two stultifying Covid years. It was a film enhanced by the social nature of theater.

During introductions, the crowd applauded and whooped enthusiastically at every mention of the return to live audience presentations. On the computer screen “Navalny” would be pretty much an intellectual exercise: “Yeah, I get it.” But in the packed Paramount, the reality on the screen was gripping, a scary look at what Hannah Arendt, trying to make sense of Nazi Adolf Eichmann, described as the “banality of evil.”

On screen, it’s the story of Alexei Navalny, the prominent leader of opposition to Vladimir Putin, and the corruption built into the Putin’s autocracy. Navalny was poisoned with the nerve agent Novichok on August 20, 2020. He became incapacitated on a flight back to Moscow from political events in Tomsk in eastern Russia and lived only because the pilots diverted his plane to Omsk where Navalny received immediate medical treatment that saved his life. Two days later his wife Yulia Navalnaya and others were able to get him evacuated on a chartered flight for further treatment to a clinic – and safety – in Germany.

That’s what happened. But who did it? Can Navalny and the staff from his partner Anti-Corruption Foundation prove that the Russian secret service, the FSB, was responsible?

In the fall of 2020 with Navalny recovering, he and his team were hidden away in Germany’s Black Forest near Freiburg, more or less in “witness protection,” according to one of the film’s producers, Odessa Rae. Rae is, incidentally, a Roosevelt High School grad of the late ‘90s whose name before she headed to Hollywood was Jennifer Holmes.

About when Navalny was in hiding, the film’s director, 29-year-old Daniel Roher, Rae, and others were working with Christo Grozev, a Bulgarian journalist connected with the investigating group BellingCat, planning to do a film on one of Grozev’s discoveries (not yet disclosed). At some point along the way, Grozev tells them, “I know who poisoned Navalny,” or words to that effect, according to Rae, and suddenly they have a huge story – if they can do it.

With Grozev as intermediary through Zoom and phone calls, Navalny agreed to filming, and the production team joined his research group in the Black Forest early in November 2020. Keep in mind at this point there’s medical evidence that Navalny had been poisoned with Novichok, a chemical agent known to be used by Russia. But there’s no firm connection with the FSB, no proof, no smoking gun, no connection with Putin, though Navalny’s rhetoric always accuses him.

Roher and his team filmed the investigative work – tracing cell phone calls, airline passenger lists, looking for connections – by Navalny, Grozev, and others. Along the way, they were also filming interviews with Navalny to build his character and story into film. They were also collecting and editing archived news and cell-phone video from protests led by or on behalf of Navalny.

Throughout the film, Navalny is impressively objective about his situation and the danger from Putin. In the interviews Roher has filmed – Navalny face-to-face with the camera, a little puzzled – and in scenes of Navalny working with his group, you see his quick smile, self-deprecating humor, and affection for those around him, particularly in his relation with Yulia who’s always close and a tower of support. The filmmakers have caught Navalny’s essence.

There’s no doubt he’s a charismatic leader, and that he’s fighting for – and leading – a cause that to the film’s audience seems hopeless never seems to weigh Navalny down. Some sense of the long odds comes through in the way Navalny repeatedly demeans Putin and the FSB, calling them “stupid.” “Stupid, stupid, stupid,” several times but unfortunately and unshakably powerful. It’s the measure of the man that his plan is always to return to Russia.

Roher said there are hours and hours of film showing Navalny’s team at work connecting a half dozen FSB agents to travel matching Navalny’s trip east, their presence in Tomsk, and cell phone records. Messy desks, laptop computers, cell phones. This could be kind of dull. But sometimes you get lucky and they did.

(Spoiler alert.) With technology that made it look like a phone call was originating from an FSB office phone, Navalny calls the FSB agents pretending to be a higher up investigating the failure of Navalny’s poisoning, and one of them falls for it. He says, among other things, roughly: “We didn’t screw up. Navalny would have died if the plane hadn’t been diverted. By Moscow he would have been dead.” The duped agent even describes putting the poison in Navalny’s underwear. (The Russians held onto and destroyed his clothing when Navalny was medevacked to Germany.)

It’s a stunning scene, and it’s all on film, an “Oh my God,” moment for Navalny, Grozev, and Maria Pevchikh, the head of the Anti-Corruption Foundation, which is closely allied with Navalny, and who’s been part of the investigation and is there watching. It’s history live, a breath-taking moment and it makes a stunning film out of “Navalny.”

The recording of the phone call and other information about the FSB agents was then made public worldwide across social media by the Navalny group. Putin is shown in several clips never mentioning Navalny by name. Navalny, the world-renowned opposition leader, is always only “that person you mentioned” when Putin responds to the media.

The film ends on January 17, 2021, with the film crew on the plane as Navalny flies back to Russia. They film him at the airport as he is arrested upon entry. Police arrest dozens of demonstrators on hand to welcome him back.

“Navalny” won two audience awards when it premiered at Sundance this past January. On April 24, the film will be run on CNN and CNN+, and on HBO MAX at a date yet to be announced. If you can’t wait, the story of Alexei Navalny’s poisoning brought to light in the film is recapped on Wikipedia. But see the film. There may be nothing quite like seeing a murder – attempted murder – solved as you watch.
Unfortunately, you’ll leave the theater knowing Putin and his agents are not punished, and Navalny’s life still hangs in the balance.

Dick Lilly
Dick Lilly is a former Seattle Times reporter who covered local government from the neighborhoods to City Hall and Seattle Public Schools. He later served as a public information officer and planner for Seattle Public Utilities, with a stint in the mayor’s office as press secretary for Mayor Paul Schell. He has written on politics for Crosscut.com and the Seattle Times as well as Post Alley.
Previous article
Other Ways to Serve: Remembering Peter Jackson
Next article
The Case Against Banning Cars in Pike Place Market