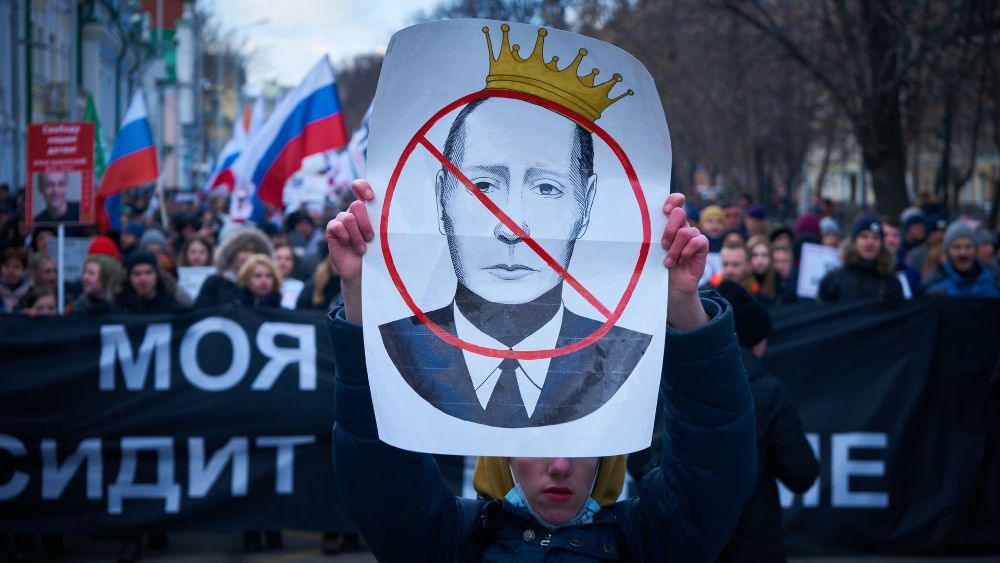 Russian school children are ratting out teachers who defy President Vladimir Putin’s edicts prohibiting criticism of his war against Ukraine.

The bodies of Russian soldiers killed in Ukraine’s fierce resistance are being returned to their wives and mothers, a gruesome reprise of the repatriated war dead from Afghanistan three decades ago that eventually forced a Soviet withdrawal.

More than 15,000 anti-war protesters across the vast Russian Federation have been arrested, jailed, and fined, most during the first weeks of the Kremlin’s “special military operation,” before dissent became criminalized and futile.

Yet in his own country, Putin’s approval rating has soared to 83%, even by the research of Levada Center, the only independent pollster in Russia, validated by the Kremlin branding it a “foreign agent.”

Russians brainwashed by years of propaganda see their country as threatened by NATO and a U.S. leadership bent on toppling Putin. They have rallied to their leader’s side, toeing the line in not calling the Russian army’s savaging of Ukraine a “war” or an “invasion.”

Galvanized by Kremlin-controlled media false claims that Ukrainians had been wantonly killing adults and children of the Russian minority, Russians now trapped in an echo chamber of Putin’s distorted narrative are embracing Stalin-era tactics of snitching on critics of the unprovoked war.

Satellite imagery shows huge columns of tanks and armored personnel carriers deploying to the southeast borders of Ukraine in preparation for a fresh attempt to storm Ukrainian forces and take more territory in separatist-held areas of Eastern Ukraine. Failure to take Kyiv, Kharkiv, or Odessa has done nothing to halt Putin’s botched attempt at conquest.

The stark reality of Russian domestic support in the face of unspeakable brutality and tens of thousands killed on both sides begs the question of what it will take to turn Russians against the war and its Kremlin instigator.

There are no short-term prospects. With public opinion on his side, Putin vowed Tuesday to press on with his offensive until the original objectives of the invasion are achieved. He has managed to stabilize the ruble by prohibiting foreign-currency exchanges and continues to reap billions in oil and gas exports each month to heavily dependent states in Europe and Asia.

Peace talks under way in Istanbul are deadlocked and unlikely to make progress toward a negotiated end to the war. Putin can continue to deploy tens of thousands more Russian troops to back-fill those killed in the failed offensives of the past 50 days.

One flicker of hope is rising from distant horizons. Hundreds of thousands of Russians have left their country in recent months, many no doubt to escape economic hardships looming as Western sanctions take their toll. But others fled to safe territory to carry on their work as independent journalists, human rights activists and politicians fighting against the authoritarian regime and international scorn Putin has brought down on Russia.

Mikhail Khodorkovsky, the former oil magnate robbed and imprisoned for a decade by Putin, has joined with other prominent exiles in the Anti-War Committee, a group committed to uniting war opponents outside Russia to break through the information barriers surrounding those within.

“Against our will we, citizens of the Russian Federation, have been held responsible for this violation of international law, a military invasion and massive loss of life. The enormity of the crime committed leaves no room for silence or passive dissent,” the founders proclaim in announcing humanitarian outreach programs for Ukrainians and Russians in need of finding refuge abroad. “It was not the Russians who started this war, but a mad dictator. But it is our civic duty to do everything we can to stop it.”

The same objectives are laid out by veteran Russian journalist Boris Grozovski in The Russia File of the Wilson Center’s Kennan Institute. Grozovski notes that the outflow of 300,000 Russians from their homeland since the invasion began raises a long-term prospect that those now living in open societies can relate the truth about what Russia is doing in Ukraine to their friends and loved ones.

In “Emigration 2022: A School of Democracy for Russian Refugees,” Grozovski makes clear the challenge of disabusing his countrymen of their delusions is a decades-long undertaking. He also concedes the strategy of uniting a diaspora against dictatorship in the homeland is one that has failed after previous mass emigrations from Russia and the Soviet Union.

Imperial Russia’s cultural icons fled the Bolshevik takeover in 1917 along with 1.2 million revolution opponents who feared Communist rule — artist Vasily Kandinsky, musician Fyodor Chaliapin, writer Vladimir Nabokov, and composer Sergei Rachmaninov among them. The emigres largely settled in Europe but never coalesced into a coordinated force to inspire Russians to throw out the brutal regime that stifled dissent, confiscated property, and cut off the Soviet Union from the emerging democracies of the West.

Neither did an exodus of more than 8 million Soviets after their World War II victory look back to their hostage countrymen and attempt to spotlight the repression of dictator Josef Stalin’s last decade in power or those who succeeded him.

“Russia’s latest emigration wave can do better,” Grozovski says of Russians now in a position to tell those left behind that they’ve been victimized by Kremlin disinformation.

At a conference of Russian scholars at the University of Washington last week, New York University Professor Eliot Borenstein acknowledged in his keynote speech “Everybody Hates Russia” the political and academic consensus that leadership change in the Kremlin must come from within.

Borenstein said he wrote the speech before the invasion and had planned to debunk the notion that the Kremlin would defy international law and attempt to conquer Ukraine. Even the most experienced academics, diplomats, journalists, and political scientists have failed to see what Putin is willing to do until he does it.

One potential domestic influence on Putin’s Ukraine war is the Soldiers’ Mothers Committee, a 1980s force of bereaved women who confronted the Kremlin as deaths mounted in the failed occupation of Afghanistan. Their brave protests were a first step in persuading reformist Soviet President Mikhail Gorbachev to withdraw Soviet troops almost a decade after his hardline predecessor Leonid Brezhnev sent them in to shore up imposed Communist rule.

Images of charred and mangled corpses in the streets of Ukrainian towns and villages where surviving Russian troops were forced to retreat have been making their way to the wives, mothers, and other loved ones in Russia.

NATO estimates Russia lost as many as 15,000 soldiers in the first six weeks of the invasion, while Ukraine claims the toll is more than 18,000. Soviet troop losses in their nine-year occupation of Afghanistan never exceeded 15,000.

In a deviation from military commitment to leave no soldier behind, the corpses of nearly 7,000 Russian soldiers have been collected from the streets and destroyed armored vehicles where they fell, according to the Kyiv government. A Ukrainian adviser to President Volodymyr Zelensky, Oleksiy Arestovych, told the Washington Post the government tried to return the bodies of 3,000 fallen Russians for burial in their homeland but was rebuffed by the Kremlin.

Putin runs little risk of being removed from power by any outside force. The Kremlin is an impregnable fortress, as are the other sprawling residences where he operates remotely from what are presumed to be heavily fortified underground quarters.

Putin’s control of Russian media and threats to arrest and prosecute foreign journalists who violate his “don’t say war” edict have chased most Western media out of Moscow to safe havens in Western Europe. A handful of free voices speak from the Baltics, like Meduza, which decamped from Moscow to Riga, Latvia, seven years ago. But reliable news about the war in Ukraine is largely unavailable inside Russia thanks to Putin’s shutting off most Russians’ access to online sources and flooding state-controlled airwaves with alternative facts.

New York Times columnist Thomas L. Friedman asked Sunday, “How do we deal with a superpower led by a war criminal?”

“We are entering a period of geopolitical and geo-economic uncertainty the likes of which we have not known since 1989 — and possibly 1939,” Friedman writes of the watershed moments of the Berlin Wall’s fall and the starting gun of World War II with the Nazi invasion of Poland.

“Putin thought that with a blitzkrieg takeover of Ukraine he would earn the proper respect from the West for Russia’s military prowess — ending the insults that Russia, with an economy smaller than the state of Texas’, was just ‘a gas station with nukes.’”

Carol J Williams
Carol J. Williams is a retired foreign correspondent with 30 years' reporting abroad for the Los Angeles Times and Associated Press. She has reported from more than 80 countries, with a focus on USSR/Russia and Eastern Europe.
Previous article
Russia’s War and a Struggle for Civilization
Next article
How Seattle Addressed Homelessness in an Earlier Era