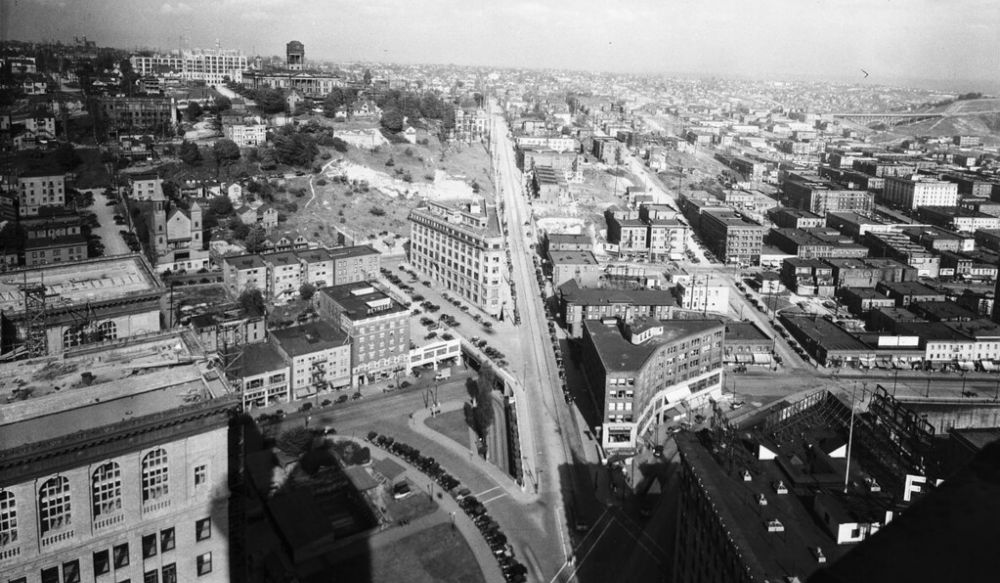 How Seattle Addressed Homelessness in an Earlier Era

We can learn from Seattle’s early and imaginative efforts to deal with the homeless. A good place to start is with the inspiring example of Jesse Epstein.

Epstein’s own immigrant background likely contributed to a deep concern for stateless, wandering individuals.  Born in Russia and raised in Great Falls, Montana, Epstein won a scholarship to the University of Washington. With his law degree in hand he drafted bills for the Washington state Legislature to establish public-housing facilities.

The Second World War brought many migrants to the Pacific Northwest, including large numbers of African Americans and Asians working at Boeing, the shipyards, fishing, and timber.  Those desperate newcomers needed shelter.

In the 1940s, after Epstein wrote the original Seattle ordinance to set up a housing authority, the City Council asked him to chair and serve as Executive Director of the authority’s Board of Commissioners. Roger Sale, in his book, Seattle Past to Present (just reissued), observed that Epstein “had what was in those days a great deal of money to spend, which of course gave him entrée to all the people he wanted to see, but the reception he got was mixed: people were mostly curious, some friendly, some hostile.  The whole idea of slum clearance and federal housing was not only new but likely to rub Seattle people the wrong way.”  Nevertheless, without missing a beat, Epstein plunged into what would become a model project for the nation: Yesler Terrace.

Sale continues, “Epstein had to go out, over and over again, and sell his project to businesses and civic groups.  Small in stature, mild in manner, soft in speech, quietly and even confidently assured in purpose, Epstein presented himself as he saw himself, as a bureaucrat more than a revolutionary.”

Soon  Epstein was asked to supervise the erection of other housing projects: Rainier Vista on Martin Luther King, Jr. Way; Holly Park at the south end of Beacon Hill; Highpoint in West Seattle; and Sand Point on Lake Washington.

Jesse Epstein embarked on a second career in the 1950s when he discovered the Mountaineers and became a trustee and then president of that durable organization.  Another Epstein lasting contribution was the establishment of a Mountaineer Literary Fund resulting in the production and sale of reading material about his adopted Pacific Northwest.

The Mountaineers and its library are thriving; Yesler Terrace is presently undergoing a complete renovation. Homelessness, of course, did not go away, but Jesse Epstein’s monuments remind us that problems can sometimes be solved through the experience and dedication of a single individual with a strong vision.

Junius Rochester
Junius Rochester, whose family has shaped the city for many generations, is an award-winning Northwest historian and author of numerous books about Seattle and other places.
Previous article
Alas, Little Chance of Canceling Putin (For Now)
Next article
Other Ways to Serve: Remembering Peter Jackson