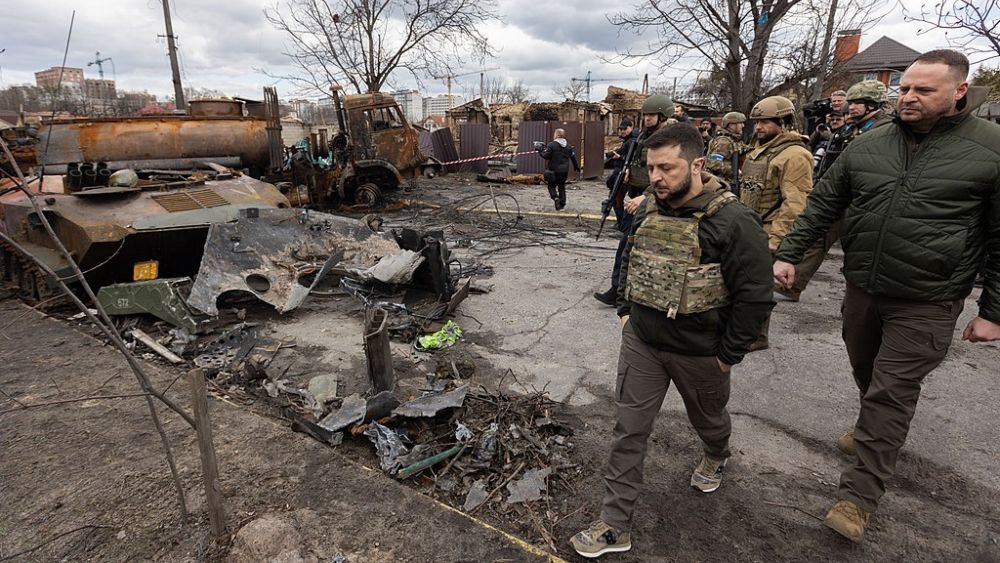 Russia’s War and a Struggle for Civilization

With the horrific scenes from the Russian retreat from northern villages around Kyiv, particularly Bucha, there is a drumbeat of accusation of “war crimes.” Russia of course totally denies responsibility, claiming that Ukrainians killed their fellow civilian Ukrainians. It is the tyrant/autocrat’s stock-in-trade. Deny completely. Reverse the charge. Blame the victims.

Trump taught us all about this. It is as if there is a play-book for autocrats somewhere that says, “When you do something wrong/bad/evil and are caught, simply blame it on whoever you’re against. You’ll be surprised how many will believe you. Especially if you repeat your lie relentlessly.”

But even as we face the Russian atrocities, let’s not forget the first and basic war crime is Russia’s invasion itself, its war of aggression against a neighbor, Ukraine. As much as these atrocities need to be called out, I worry that a debate over “war crimes,” could become a distraction. I may be, I hope I am, wrong about that. But let’s not lose sight of the basic war crime, which is the war.

This war is unique in my memory. Not only is the Ukrainian resistance a just war, but it is one that does seem to crystallize the greater civilization struggle now before us. Some, like historian Samuel Huntington, claimed for the “War on Terror,” that it was a great civilization struggle between Islam, or radical Islam, and the Christian west. That seemed to me overblown and unhelpful.

But Ukraine is different. Ezra Klein wrote about this “civilizational” struggle recently, describing it as autocratic forms of government versus democracy and liberalism, a cause which had, until now, been flagging. But Klein is careful to define liberalism, which does not mean being on the progressive or even moderate left. “This is not about supporting universal health care or disagreeing with Justice Samuel Alito. [It] means liberalism as in the shared assumptions of the West: a belief in human dignity, universal rights, individual flourishing and the consent of the governed.” Back to basics.

This is a liberalism that both Democrats and Republicans should be able to get behind, except that Donald Trump has spent so much time and energy undermining it among Republicans.

Tom Friedman has also been working on these big themes, recently describing the war in Ukraine as the first real “world war.” By that he means the whole new wired-world (well except the news-blocked Russian people) can see it on their phones. But he also means a civilization struggle between autocracy and liberal, democratic values.

“These [autocratic] regimes have become adept at using new surveillance technologies to control political opponents and information flows and to manipulate their politics and state financial resources to keep themselves ensconced in power. We are talking about Turkey, Myanmar, China, North Korea, Peru, Brazil, the Philippines, Hungary, and several Arab states. Putin was surely hoping that a second Trump term might transform America into a version of this kind of strongman kleptocracy and tip the whole global balance his way.”

Some kind of victory for Ukraine, still very far from certain or even likely, will not mean the triumph of democracy and liberalism the world over; nor will a defeat mean the end of that cause. What the war there has done is to crystallize what is at stake. It also casts a sharper light on the fact that this is not for us only an external conflict. It is, and perhaps even more importantly, an internal conflict. Hence, the ghastly supporters of Putin among American politicians and media-types. But illiberalism is alive not only on the right, but on the left as well. Identity politics when pushed far enough goes there. At their extremes, right and left become mirror images of one another.

In Ezra Klein’s piece, he includes Christianity as part of the liberal legacy of the west and has some very interesting things to say about Christian faith. Here they are:

“Christianity, too, gleams with a light it often lacks in today’s politics, and even in its pews: Here is a religion that insists on the dignity of all people and centers the poor and the marginalized. [Autocrats’] subjects fear Christianity because they fear it cannot be tamed; even when the leaders they admire try to subvert it for their own purposes, it infects their societies with a latent egalitarianism, setting a trap that will inevitably be sprung.”

And more, in which Klein, who is Jewish, says some important things about Christian faith, which seem, alas, to escape many self-professed “Christians”:

“I suspect another way of asking the same question is this: Can the constant confrontation with our failures and deficiencies produce a culture that is generous and forgiving? Can it be concerned with those who feel not just left behind, as many in America do, but left out, as so many Ukrainians were for so long?

“The answer to that — if there is an answer to that — may lie in the Christianity the anti-liberals feared, which too few in politics practice. What I, as an outsider to Christianity, have always found most beautiful about it is how strange it is. Here is a worldview built on a foundation of universal sin and insufficiency, an equality that bleeds out of the recognition that we are all broken, rather than that we must all be great. I’ve always envied the practice of confession, not least for its recognition that there will always be more to confess and so there must always be more opportunities to be forgiven.” (emphasis added)

Autocrats like Putin and wanna-be’s like Trump try to use Christianity to sanctify their nationalistic and autocratic aims and hold on power. But Klein is right. In the end, Christianity refuses, despite temporary set-backs — looking at you, “evangelicals” — to be tamed.

Anthony B. Robinsonhttps://www.anthonybrobinson.com/
Tony is a writer, teacher, speaker and ordained minister (United Church of Christ). He served as Senior Minister of Seattle’s Plymouth Congregational Church for fourteen years. His newest book is Useful Wisdom: Letters to Young (and not so young) Ministers. He divides his time between Seattle and a cabin in Wallowa County of northeastern Oregon. If you’d like to know more or receive his regular blogs in your email, go to his site listed above to sign-up.
Previous article
Opening Day: Confessions of a Baseball Novice
Next article
Alas, Little Chance of Canceling Putin (For Now)