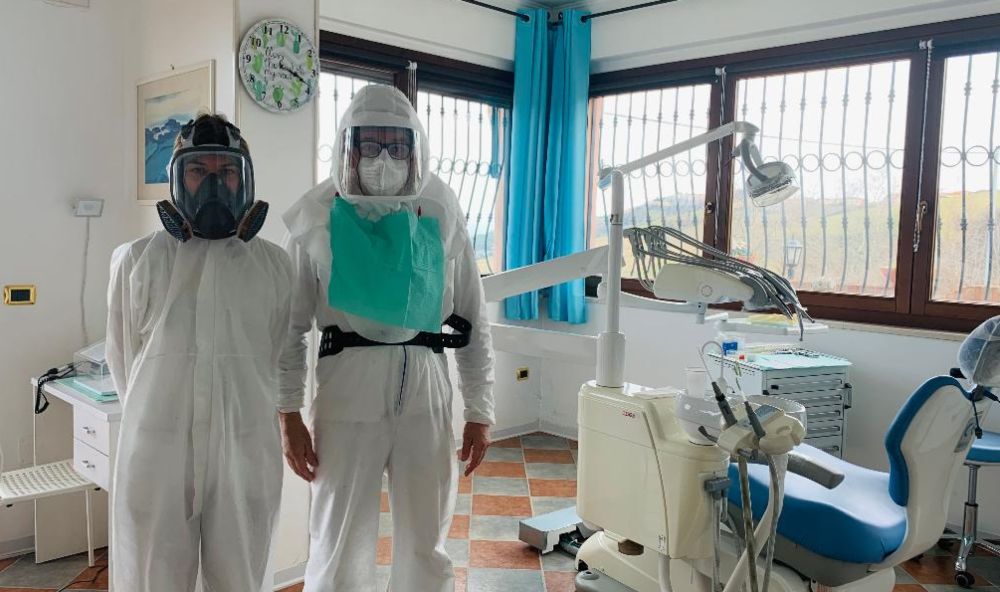 When I was fourteen, my parents decided I needed to have braces. Not that I could argue much — though argue I did — as I had a pronounced overbite, buck teeth, and a mouth that could not accommodate the normal number of teeth. Some teeth were misaligned or overlapping. In short, my dental array was a mess.  The consensus by all, save one, was that I would get braces.

Trouble was my father, an assistant professor of research physiology, barely made enough to feed the six members of the household and live in a modest split-level in an exurb of Minneapolis. However, he discovered a way to save the cost. The University of Minnesota dental school offered free orthodontia work to children of the teaching staff, if the children were the subject of students in the School of Dentistry. Oh, my.

Thus began my abject, multi-decade fear of going to the dentist. At that time in the history of American orthodontics, affixing braces involved pounding metal bands onto each tooth with a small chisel-like tool and a hammer. Each band required dozens of strikes. All the bands, hundreds. Every Saturday morning for two hours over three months I endured this torment.  I suppose I am fortunate to not also fear the approach of weekends.

Ever since that childhood trauma, my dislike and fear of dentists has gone unabated. I can’t stand the thought.

There was one brief period of dental care during my 30s that was not unpleasant. The dentist clearly made hiring decisions for hygienists based on pulchritude. He also had them wear tank tops, even in winter. Years later, I read that he was successfully sued by an employee for inappropriate workplace behavior. So much for that method.

Six years ago, in Seattle, I came across a dentist who had a brilliant technique. One so simple that I was stunned I had never experienced it in all the years of cleaning, cavity filling, and oral surgery. That dentist had invested in a Virtual Reality-type head helmet that allowed the patient to watch movies during the work. A local anesthetic was administered, I selected the film, and set the volume. Two hours later, I emerged, with work completed, and well-entertained. The system used the principle of distracting the sensory mechanisms of the brain. Whatever it was, it worked.

This experience was outdone by a recent trip to a dentist in Italy, where my wife and I have lived for the past five years. Shamefully, I had avoided a cleaning for years, again fearing the worst. Perhaps a bit of stereotypical profiling of Italians entered into it, as I imagined an ancient office, a rickety chair, a big spittoon, and terrifying instruments laid out on a metal table — devices of oral torture. Just possibly, I had watched Marathon Man too many times.

I did not go on my own volition, however. My wife needed a sudden tooth problem fixed, and we went without much advance notice to see a dentist in another town. I barely had time to think about it. And besides, it wasn’t me. For a moment, though, I hesitated about going inside to wait; my leg muscles cramped up. As the worm characters said in Men in Black, “Can’t move. Too scared.”

I was soon glad that I did go in, although it was more from shock than self-revelation. After waiting five minutes, the dentist himself appeared. I’m sure I winced at what he was wearing. It looked like he was about to be launched into outer space for a long voyage. He was dressed, head to toe, in a heavy white suit, with a cannister on a backpack, and a helmet with a curved, acrylic faceplate. This was, he explained, dentistry in the era of COVID-19.

He had a full breathing system that protected both the patient and him. His assistant had similar gear. After taking care of my wife, he led me to his office to see what dental work I might need. Aside from the space-suit attire, I was impressed by two things: The view out the windows was a panorama of vineyards and rolling green hillsides. The sea shimmered in the distance. Who needs films when you can gaze at a romantic Italian landscape? The other impressive point was the chair itself. A comfortable chaise longue, with a robot-like appendage displaying a neatly arranged collection of precision electronic tools, each resting in its own contoured cradle. They gleamed in the sunlight. Was this science I was seeing, or science fiction come to pass?

The dentist’s demeanor is what finally convinced me. Friendly, caring, and affable. He even bantered with a jokey metaphor that, I’m sure, was part of his repertoire. He noted my general excellent health for my advancing age. “But even if you own a Ferrari,” he said in melodic Italian, “you still have to change the oil to keep it running.” I got it and horselaughed.

Following a brief tour around my mouth, he pronounced what I needed. We made an appointment for the following week with his perky assistant. The morning of the 2:00 pm appointment, I tried to conquer my growing anxiety with a walk through a favorite street market and a long lunch in the warm sun at an outdoor café. It didn’t work. My mouth was on high alert.

As I walked into the studio of Dr. Rametta, located in his home, a few minutes before two, I was in DEFCON 3 mode of full-on fear and trepidation. The doctor saw the worried look on my face and assured me there would be no pain. A nice chairside manner maybe. But I was skeptical.

I quickly discovered that my demi-decade absence from regular dental care — first by my own bad choice and then a result of COVID — meant that I had missed an entire era in the advancement of teeth cleaning. I suppose I should count myself fortunate that I still have a full set of teeth, with no cavities.

I was fully expecting several things, based on past experience. First, a lengthy series of X-rays, each with that folded piece of film crammed into my cheeks. Second, two metal plates filled with mushy, foul-tasting gelatinous material shoved onto my teeth, the liquid substance oozing down my throat and seeming to choke off the airway. Third, the dentist jamming thin picks of steel into the space between each tooth and the adjacent gum, while shouting out the depth of the insertion. And finally, at least an hour, perhaps two, of rough abrasion with a loud tool resembling a small power drill.

None of that happened. Indeed, I barely even noticed it. Twenty minutes later, the dentist announced he was done. My teeth had been thoroughly cleaned.

This, to me, was nothing short of a minor miracle. How was it possible? The doctor explained that the Italian government provides dentists with tax incentives every few years to purchase the latest in state-of-the-art equipment. He had a system of tools for cleaning teeth that relies on ultrasound vibration to break up the plaque. It’s fast. It’s virtually pain-free. And best of all, the whole process cost only 70 euros ($80). That’s it. Dental work is not covered by the national health system, so this was my out-of-pocket cost.

So, where were the dental hygienists that usually assist? Where was the receptionist? Where was the accountant, ever eager to send out a hefty bill? Not there. Just the dentist and his assistant, a young woman dentist-in-training. No huge overhead inflated with staff. A simple three-room studio in his home, filled with the latest tools of the trade.

As I left the premises, I was smiling. Not the usual result of a trip to the dentist.

Mark Hinshaw
Mark Hinshaw is a retired architect and city planner who lived in Seattle for more than 40 years. For 12 years he had a regular column on architecture for The Seattle Times and later was a frequent contributor to Crosscut. He now lives in a small hill town in Italy.
Previous article
Eddie Carlson, Master of the Business Establishment and Sparkplug of the ‘Seattle Spirit’
Next article
Are Bans on Russian Vodka Hitting the Wrong Target?