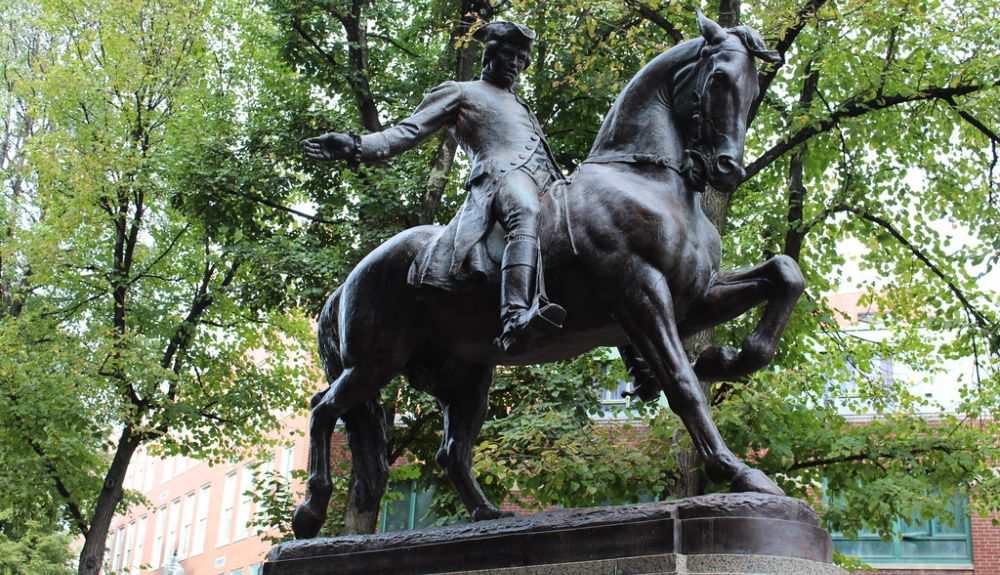 In the fraught and frightening days after Russia’s Vladimir Putin ordered the invasion of Ukraine, I just happened to be reading, I  Love Paul Revere Whether He Rode or Not. The  book, published in 1991, focuses on our shared national myths, the legends that may have helped Americans become united in reacting with strength to Putin’s murderous actions.

The book’s author, Richard Shenkman, is a friend: a Seattle-based historian who has written seven books, most recently Political Animals, an explanation for why we vote the way we do. Rick (as friends know him) is a former managing editor of KIRO-TV and has spent much of his career working to set historical records straight. In 2001, he founded “History News Network,” a nonprofit corporation now hosted by George Washington University. He served as the network’s first publisher and editor until retiring in 2019.

Rick borrowed the title for his I Love Paul Revere from President William Harding’s quote when he learned that Revere was captured by the British and his famous ride was actually made by others. The Revere ride is just one of the many legends and myths Shenkman has explained.

In his chapter on patriotism, Shenkman observes that nothing seems “more natural to Americans” than to venerate patriotic symbols like the American flag. But he points out that Old Glory wasn’t even around until after the Revolutionary War. The Stars and Stripes didn’t fly at Bunker Hill, nor when Washington crossed the Delaware. Never mind that artists later added the flag to their paintings. The only Revolutionary hero to fight under the flag was John Paul Jones who needed a battle flag for his ship, the Bonhomme Richard.

No doubt the nation’s founders would be pleased to see the flag respected today but they’d hardly understand the flag being virtually worshipped, which is a modern development. Americans didn’t begin pledging allegiance to the flag until 1892, nor begin saluting the flag until the Spanish American War.

One can’t discuss the flag without mentioning the story that Betsy Ross is said to have stitched the first one. Only she did not. That was a fable made up by Betsy’s heirs to make the family seem more important. No one individual can be given credit for the flag commissioned by the Navy in 1776. It was simply the basic British flag with its red field divided by white stripes. A second flag design substituted stars for the cross in the corner square. It took a resolution of Congress to declare that the flag would be “13 stars, white on a blue field representing a new constellation.”

Since the nation’s early days, politicians have embellished much of our history. They weave myths about the founding fathers who allegedly never made a mistake, loved mankind, and trusted the people. Again, a bit of blarney. We know the founders were hardly saints: Ben Franklin was a womanizer who fathered an illegitimate child or two, and John Adams jailed journalists who dared to insult him. Thomas Jefferson impregnated Sally Hemmings, one of his slaves. As the deeply indebted President Jefferson insisted, public debt was “the greatest danger to be feared,” yet when he wanted to complete the Louisiana Purchase he put away his scruples.

Even George Washington, although rightly honored as the general who held a rag-tag army together throughout eight challenging war years, never won a major battle. In 1789 when Washington campaigned for the Virginia House of Burgess, he enlisted the aid of Barbadian rum and had the booze ladled out to prospective voters.

Equally as overblown as generalizations about the nation’s saintly founders are myths that America — that Biblical “City on the Hill” — was established as a beacon of liberty by a chosen people committed to a “virtuous” society. The so-called “chosen” were only 160,000 — out of 4 million Americans in 1787 — able to vote for delegates who ratified the Constitution. Yet the shining city image appealed to leaders as diverse as Ronald Reagan and John F. Kennedy, who proclaimed that “We must always consider that we shall be a city upon a hill — the eyes of all people are upon us.”

Shenkman sets us straight on everyone from the Puritans, who weren’t all that churchly, to esteemed heroes like Davy Crockett who was a juvenile delinquent, wife deserter, and braggart. Crockett went West and, although known as a crack shot, missed the target in a shooting match, lost his horse, got clawed by a cougar, and captured by the Comanche.

Building on his books exploring our myths and legends, Shenkman appeared in an educational series for the Learning Channel. Still available through the “History News Network” are videos focused on heroic figures like President Abraham Lincoln. Shenkman explains that — far from the romantic notion that Lincoln was just a country lawyer, the rail-splitter once worked as a corporate lawyer for the railroads. Lincoln discovered politics early and loved it. He ran unsuccessfully for state legislature at 23 before winning the first of three legislative terms at 25. He had an uninspiring term as Congressman before his unsuccessful run for Senate, and before setting his sights on the presidency, which Lincoln won with only 40 percent of the vote. Shenkman concludes that there are more myths about Lincoln than any other American.

Intrigued by Rick’s success exploring long-held myths, I phoned and asked him if he had received pushback from his role in destroying long-cherished legends. He said he had not, explaining the trick is to do it “with good humor.” As he says, “I didn’t set out to shoot Santa Claus.” Nor does he believe there is anything inherently wrong with myths per se. America — with its citizens drawn from all over the world — has need for such stories, right or wrong, that hold us together. He concludes, “We have little else that unites us.”

But unique as Americans are in so many ways, they aren’t as different as politicians would have us believe. In killing Indians, enslaving Blacks and breaking labor unions, in allowing states to suppress votes and deny equal protection under the law, we have proven ourselves as capable as any other nation in sinking to dishonesty, persecution, and corruption.

In his book, Shenkman says, “There is no such thing as a ‘definitive’ history. History isn’t written in cement. Every generation rewrites history to its own tastes.” He believes we can have our myths and our truths too. The myths serve as symbols of cultural unity even when their fallacy is well known. George didn’t admit to chopping down that cherry tree, but he did wage a successful revolution.

More distressing by far than belief in this nation’s cherished legends, according to Shenkman, is the dark reality of leaders like Donald Trump trying to convince people with the blatant lie that he won the 2020 election. As we now know, Trump himself knew he had lost.

Even exceeding Trump’s self-serving lies are malignant falsehoods being foisted upon the Russian people by Putin. In his pre-invasion speech to the Russian people, Putin spewed outrageous untruths about Ukraine. He lied claiming Ukraine was “entirely created by Russia” and that it has no legitimacy as a nation.

Putin rewrote history claiming that NATO is merely “an instrument of U. S. foreign policy” and that Ukraine is “a neo-Nazi regime,” bent on genocide and development of nuclear weapons. He claimed that Russia was threatened and had no choice but to act in self-defense to demilitarize and “deNazify” Ukraine. His paranoid speech showed that his unprovoked strike was not merely aimed at Ukraine but directed at European unity, at NATO and the U.S.  The speech was an authoritarian screed against democracy.

When I spoke with Shenkman about Putin, he pointed out that the Russian dictator had “learned from his successes.” On his watch, Putin has had three wars: Syria, the second Chechen War and the Crimean takeover. He likely believed that an invasion would progress as it had in previous conflicts. He probably figured that NATO would splinter, Ukrainian president Zelensky would flee to safety and be driven from office, and the Russian invasion would quickly succeed. Yet this time Putin’s was attacking Kyiv, a large modern city with a charismatic national leader (a Jew in fact). Russian conscripts are facing Ukrainian citizens protecting their homeland and determined to resist.

Putin’s strategy — his customary tactic of targeting apartment buildings, schools, and hospitals, devastating civilian populations, and then taking over with minimal cost — so far has lagged. He became a believer of his own myths.

Jean Godden
Jean Godden wrote columns first for the Seattle Post-Intelligencer and late for the Seattle Times. In 2002, she quit to run for City Council where she served for 12 years. Since then she published a book of city stories titled “Citizen Jean.” She is now co-host of The Bridge aired on community station KMGP at 101.1 FM. You can email tips and comments to Jean at jgodden@blarg.net.
Previous article
Recalling the Goodwill Games: An Investment in Befriending Russia
Next article
#2. Blockbuster Deal(s): Russell Wilson to Denver, Seahawks Sale Next