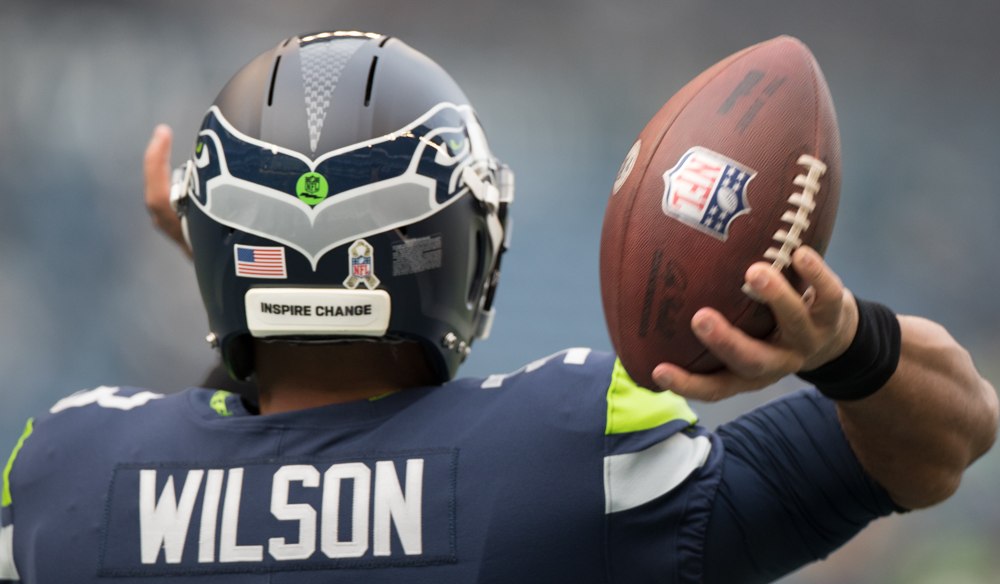 Asked Dec. 30 if his next Seahawks game would be his last in Seattle, Russell Wilson said, “For me personally, I hope it is not . . . I also know that the reality is that I know it won’t be my last game in the NFL, period.”

He knew then he was gone.

Same thing when coach Pete Carroll said last week at the scouting combine in Indianapolis that the Seahawks “had no intention” of trading their premium quarterback, and when general manager John Schneider said he was “not shopping” the best player in Seahawks history and a near-certain NFL Hall of Fame member.

All were deliberately disingenuous, knowing they were closing in on a blockbuster deal with the Denver Broncos.

That’s how the game inside The Game is played. The Seahawks wanted to drive up the market by denying they were in the market. Wilson played along.

Each got Tuesday a chunk of what they sought: Wilson goes to an offense-oriented team that has had 11 starting QBs since 2016 (tied for the most in the NFL) to become the final piece in a genuine Super Bowl contender. The Seahawks picked up two first-round picks, including the ninth in the first round of the April draft, two second-round picks, a fifth-rounder, a good tight end (Noah Fant, 24) and a good pass rusher (Shelby Harris, 30). They also acquired a serviceable backup quarterback, Drew Lock, who is better than Geno Smith only because he has not recently been busted for a DUI, but in no way represents a solution to the Crater Lake-sized ditch left by Wilson’s departure. Not to mention the $26 million owed Wilson in guaranteed money over his final two years that cannot be used for other player contracts (what’s called dead money).

Finding a QB starter awaits another move, or moves. This Seahawks’ hand has just opened. At least now, the Seahawks have more than a pair of deuces.

Many things influenced the biggest sports deal in Seattle sports history (the 1999 trade of Ken Griffey Jr. is close, but Wilson, by position, had more hegemony over the Seahawks success than Junior did with the Mariners). Here are three factors that stand out to me:

Regarding the final point about a sale, according two sources with knowledge of the circumstances who asked for anonymity, the death of owner Paul Allen in October 2018, without an obvious heir for the football franchise, set in motion a series of events that includes the sale of many, if not most, of the assets of a man whose net worth was well more than $20 billion — the wealthiest owner in the the NFL at one time by a factor of four.

Among items already sold by his Vulcan holding company were his mega-yacht, a hilltop mansion in Los Angeles, and Google’s Seattle headquarters building on South Lake Union for $802 million, believed to be a city per-square-foot record.

According to a source, the sale of the Seahawks “is going happen, no doubt,” influenced not by any won-loss record but the desire by the Vulcan trust to avoid estate and income taxes. It’s a typical development in the world of mega-wealth, and ironically the sale is a driver influencing Wilson’s new team. The Denver Broncos are up for auction following the 2019 death of longtime owner Pat Bowlen, and subsequent squabbling among his heirs that led to the public auction. The early estimate of the winning bid is north of $4 billion.

Regarding the Seattle franchise’s possible sale, the sources had no timetable. But a potential local buyer is a guy who wouldn’t need to bother with an auction, after doing well with a little Seattle online bookstore. Jeff Bezos figures to muster the $4 billion-plus cost from the change under the seat cushions in his Blue Origin rocket ride for the uber-rich.

Bezos is already said to be interested in an NFL franchise, and was reported to have dismissed any interest in buying the Washington Commanders near his second home in the D.C. suburbs. But Amazon is all over the notion of expanding its footprint in sports. Even though he’s done with his day job in Seattle, Bezos would be eagerly welcomed among the NFL’s landed gentry.

So why trade away the franchise’s best football asset? The answer gets us to the first two drivers. Because the timing of a proposed sale is not known, it’s better to resolve the QB situation now.

If Wilson played both years of his remaining contract and entered free agency, the Seahawks surely would lose him, getting only a third-round compensatory pick for his departure. Even if he played in Seattle only this season, he would likely bring far less in trade than the Seahawks obtained Tuesday (the official announcement of the deal awaits the passing of physical exams).

The trust is obligated to get apex value for the asset. After a 7-10 season that didn’t have a first-round pick until the Denver deal onTuesday, the Seahawks are seen as a franchise in decline. Absent Wilson, the decline grows steep. But between free agency beginning next week (where the Seahawks now have more than $40 million in cap space to hire veteran players under the salary cap) and the April draft, Carroll and Schneider, minus Wilson’s $35 million salary, have flexibility to bust some moves.

However, since 2012, Carroll and Schneider have whiffed more than they have hit on trades, drafts, and free agent signings. Starting in 2016, the Seahawks have drafted 52 players, and only one received All-Pro designation: Punter Michael Dickson. It is largely testimony to Wilson’s capacity for spontaneous invention that the first losing season was delayed until 2021.

No one knows that conclusion better than Wilson and his agent, Mark Rodgers. They signaled their dismay 13 months ago, and went public with complaints of Seahawks’ inadequacies that became national sports-media fixtures. Carroll and Schneider were enraged. They refused a chance to trade him. For 2021, the sides publicly patched the hurt feelings. Then Wilson missed games to injury for the first time in his career, and also had a losing season for the first time in his career.

So yes, the writing has been on the wall for this moment. The Seahawks were forced to do the forbidden thing in the NFL: they traded a Hall of Fame quarterback with tread on his tires. But they also unloaded a big salary, broke the franchise-wide tension, and dodged the chance to extend Wilson’s contract in 2024 for $50 million or more a year for four or five years. And they won’t have to talk around Wilson’s decline in speed and elusiveness, the virtues that made him so confounding for defenses.

In exchange, management has dived into the NFL shark tank with an open wound. Carroll and Schneider need to hit on almost every trade, free-agent signing, and draft choice to become something other than a last-place team in the loaded NFC West. Vulcan chair Jody Allen needs to sell a franchise on ascent, and Bezos is known to suffer losers poorly.

All Wilson has to do is be better than John Elway and Peyton Manning, the best QBs in Broncos annals and two of the 10 best in NFL history. More important, he has to be better than young NFC West rivals Patrick Mahomes and Justin Herbert.

Many fans are heavy-hearted at the departure of one of the most thrilling athletes in Seattle sports history. Depending on how the next couple of months proceed regarding talent acquisition, the sniffles may be overcome with an NFL season of unmatched sports theater.

Art Thiel
Art Thiel is a longtime sports columnist in Seattle, for many years at the Seattle Post-Intelligencer, and now as founding editor at SportsPressNW.com.
Previous article
When a Country Believes its own Mythology (for Good and for Bad)
Next article
Russell Wilson No Longer Has to Carry the Whole Damn Team