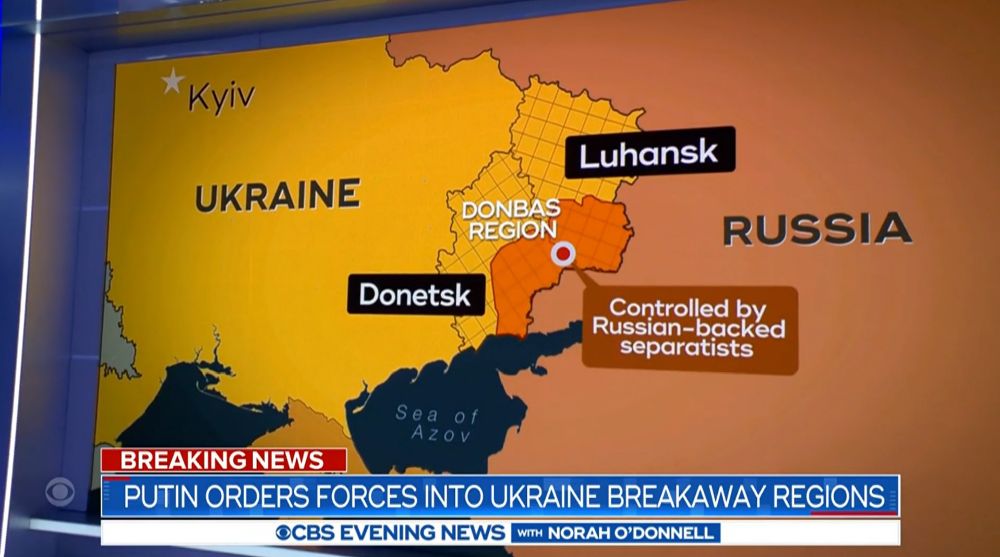 Ukraine: Putin’s Invasion by any other Name

Russian President Vladimir Putin is a master of the stealth invasion. Even when his seizure of territory from sovereign neighbors is carried out in plain sight, his inscrutable moves and denied objectives often confuse his adversaries and render their efforts to thwart him ineffective.

The Kremlin leader’s announcement Monday that Russia recognizes the proclaimed independence of two Eastern Ukraine provinces controlled by Russia-backed separatists follows the blueprint of his previous seizures of strategic territory from the former Soviet republic of Georgia in 2008 and Ukraine’s Crimea region in 2014.

Putin’s tactics are so audacious and defiant of international law as to be disbelieved until their objective is a fait accompli. He wouldn’t dare, Western leaders pronounced before, during and after those earlier invasions. Surely, they insisted after Putin’s troops overran Georgia’s South Ossetia and Abkhazia regions in August 2008, Russia will be ostracized as a rogue nation for violating the post-World War II order that borders cannot be changed by force. No law-abiding state will collaborate with Russia, it was assumed after his seizure and annexation of Crimea, unless he retreats and respects Ukrainian sovereignty.

Crimea gives Russia dominion over the Black Sea and the power to bottle up Ukrainian naval forces when the Kremlin deems it necessary to do so. That Russia already had a lease with independent Ukraine giving it control of the naval port of Sevastopol through 2042 was never considered a fact undermining Putin’s stance that Crimea is vital to Russian national security and must always be part of Russia.

In Donbas, the industrialized region along the Don River basin and some of Ukraine’s most fertile and productive land, Putin postures as the protector of the Russian-speaking minority in the breakaway provinces of Donetsk and Luhansk. He claims his fellow Russians are abused at the hands of a Ukrainian government under the sway of NATO, a U.S.-led Western alliance bent on destroying the last vestige of Russia’s Soviet-era prowess.

After weeks of hysterical Russian media reports that Ukrainian forces were committing “genocide” against Russian-speaking Ukrainian citizens, Putin responded to the purported cry for rescue with his proclamation recognizing the two republics’ independence.  Recognition was a necessary prelude to sending in “peacekeepers” to restore order in the regions he has been disrupting for the past eight years.

Often lost on foreign journalists and ignored by Russia’s state-controlled press is that the Russians who comprise 17% of Ukraine’s 44 million people are not all pining for reunion with Mother Russia. Not even most of the Ukrainians who identify as ethnically Russian or Russian-speaking in Eastern Ukraine, which borders Russia’s Rostov region, oppose Ukrainian independence. Ukraine’s second-largest city, Kharkiv, is predominantly Russian but has steadfastly rejected the secessionist pressures of their neighboring provinces to the south.

Putin is lauded by military and political historians as a skilled tactician, able to accomplish what might be strategically challenging with destabilizing moves that leave a conflict to fester. He is a patient predator, willing to wait out diplomatic efforts to ease the pressures he creates on the path to rebuilding Russia’s lost empire and superpower status.

Ethnic tensions in the Donbas intensified in late 2013 when the last Putin-allied president of Ukraine, Viktor Yanukovych, attempted to block the country from pursuing alliance with Western democracies in the European Union. As with Ukraine’s aspirations to join NATO, formal admission to the EU was expected to take 20 years for the government in Kyiv to get its economy stabilized and the country’s rampant corruption eradicated.

On Putin’s orders, Yanukovych scuttled the Ukrainian government’s acceptance of an EU path to eventual membership, sparking a three-month pro-democracy revolution that culminated with the February 2014 ouster of Yanukovych and his escape to refuge in Russia. The most ardent supporters of Yanukovych’s pro-Kremlin Party of Regions were the Russian-speaking minority in Eastern Ukraine, which provided Putin with a disgruntled force to empower with arms infusions and military training.

Putin’s success, at least so far, in carrying off invasions and occupations with impunity is in part his skill in conjuring up mirages of plausibility to distract law-abiding leaders of the international community. Those 150,000 troops amassed on Ukraine’s borders over the past few months? Not to worry, nothing to do with an invasion, just long-scheduled maneuvers carried out on Russia’s own land.

The troops and tanks handily within a few miles of Ukraine’s border and expected to flow into the newly recognized breakaway republics are not occupiers, in the Kremlin leader’s view. They are peacekeepers on a mission to protect the Russian-speaking community, which according to the Kremlin extends to the vulnerable areas between Donbas and Crimea, the stretch of prime territory known as Novorossiysk along the inland Sea of Azov. And those Russian-speaking Ukrainians in Kharkiv? Look for Putin’s peacekeepers to find some social conflict in need of their resolving.

Much speculation of late has been on how far Putin will push into Ukraine, at least in this initial phase of invasion. Talk of Russian troops massing for a blitz strike and takeover of Kyiv intensified over the weekend when Kremlin troops said to be on maneuvers in Belarus decided en masse to extend their stay along the Ukraine border. Those forces are within 160 miles of the Ukrainian capital, a city of nearly 3 million and strongly defensive of their independence.

Western analysts have been wrong for more than a dozen years in predicting disaster for Putin by his overreaching for more territory to add to the globe’s largest country. They warn he is miscalculating his ability to strike, occupy and retain coveted territory in the now-independent states of the former Soviet Union. Ukraine’s military is now stronger than during Putin’s invasions of 2014 and its population more determined to stay out of the Kremlin’s authoritarian orbit.

An assault on Kyiv might be stretching what is achievable for Putin. Murmurings of such an ambitious attempt is probably a tactic meant to leave Ukraine’s Western allies relieved when and if the invasion is limited to the already unstable eastern provinces.

Likewise, reports that the Kremlin has prepared a “kill list” of Ukrainian officials and other enemies to be eliminated once Russian troops take over is likely a red herring put out to paint those purported intelligence experts as reactionary or misinformed.

U.S. and European threats of withering sanctions have had little influence on Putin’s aggressive drive to force Ukraine back into its sphere of influence. Even if a united Western response cuts off Russia from international financial networks vital to trade and energy transactions, Putin has patiently amassed enough hard-currency cash — more than $600 billion — that would allow him to bypass the blocked banking systems and redirect crucial commodities sales to China.

Chinese President Xi Jinping is a willing partner to Putin in defying Western governments’ criticism of both countries’ human rights abuses and aspirations to retake territory they consider their own. Russia retaking more of Ukraine could clear the way for Beijing to forcibly reunite democratic Taiwan with the Communist mainland.

Expecting sanctions to isolate and punish Russia will likely miss their mark when he can count on Xi to fill the void left by Western ostracization. That should give Putin time to wait out international outrage and plot his next moves in pursuit of a new Russian empire.

Carol J Williams
Carol J. Williams is a retired foreign correspondent with 30 years' reporting abroad for the Los Angeles Times and Associated Press. She has reported from more than 80 countries, with a focus on USSR/Russia and Eastern Europe.
Previous article
Attack: Trump Tries to Change Rules on Liz Cheney Primary
Next article
Interfaith Prayer Service for Peace in Ukraine: Wednesday Evening at St. James Cathedral