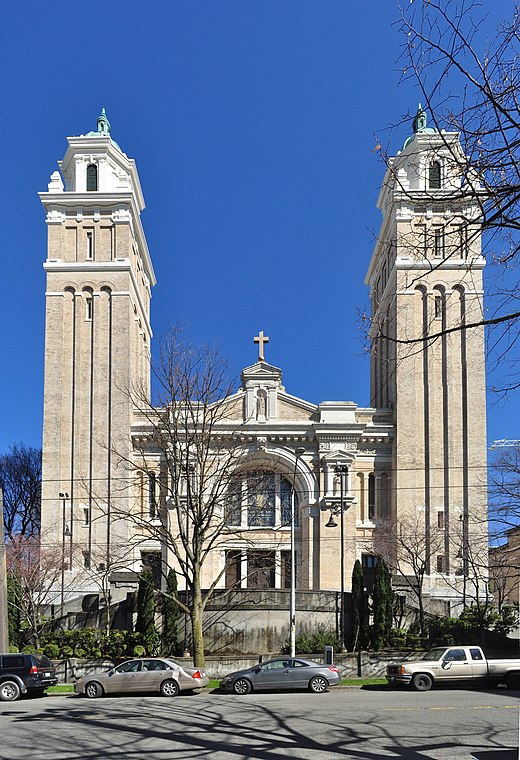 An interfaith prayer service for peace in Ukraine is scheduled for Wednesday evening, Feb. 23, at 7 p.m. in St. James Cathedral. The service is the latest occasion in which the very secular city of Seattle has turned to a demonstration of faith in times of war and national pain.

“In the midst of escalating tensions in Ukraine, people of all faiths are invited to an ecumenical and interfaith prayer for peace,” the cathedral announced.  “The one-hour service will include music, reflection, and spoken prayer from different religious traditions.” The Ukraine service will be livestreamed.

The past vigils of concern have featured scripture and prayer, as well as marches. Seattle was scene of the nation’s largest peace demonstrations on the eve of Gulf War I in 1991 and Gulf War II in 2003, on both occasions with a 1.46-mile march across Capitol Hill from St. Mark’s Cathedral, seat of the Episcopal Diocese of Olympia, to Catholic St. James Cathedral.

Prayer services were held at both cathedrals after the 2012 massacre of 20 first-graders and six adults at the Sandy Hook Elementary School at Newtown, Connecticut.  An interfaith effort served as catalyst for a statewide gun-safety movement that succeeded in passing gun-safety initiatives in 2014, 2016, and 2018 — each time after the Washington Legislature had failed to act.

The 2016 massacre of 48 people at an LGBTQ-themed Orlando, Florida, nightclub occasioned another march, sent off with prayers by Episcopal Bishop Greg Rickel and featuring a service in which local gay and lesbian leaders did readings from the pulpit of St. James.  A fourth march for immigrant rights, in 2017, was a protest directed at policies of the Trump Administration.

Serving as catalysts have been a nucleus of Seattle faith leaders: St. James pastor Fr. Michael Ryan, St. Mark’s dean Very Rev. Steve Thomason, Rabbi Daniel Weiner of Temple de Hirsch, and Michael Ramos of the Church Council of Greater Seattle.  “We’re working together,” Ryan said in an email on the Ukraine prayer service. Additionally during the Trump Administration, the two cathedrals and Temple de Hirsch Sinai offered refuge to those threatened with deportation by Immigration and Customs Enforcement (ICE).

Guns of war and mass shootings often take place hundreds or thousands of miles away, although the Northwest has experienced multiple cases of gun violence.  Why march or convene to pray? A passage from Karl Jaspers’ post-war book, The Question of German Guilt, comes to mind: “There exists a solidarity among men as human beings that makes each co-responsible for every wrong and every injustice in the world, especially for crimes connected in his presence or with his knowledge.  If I fail to do whatever I can to prevent them, I too am guilty.”