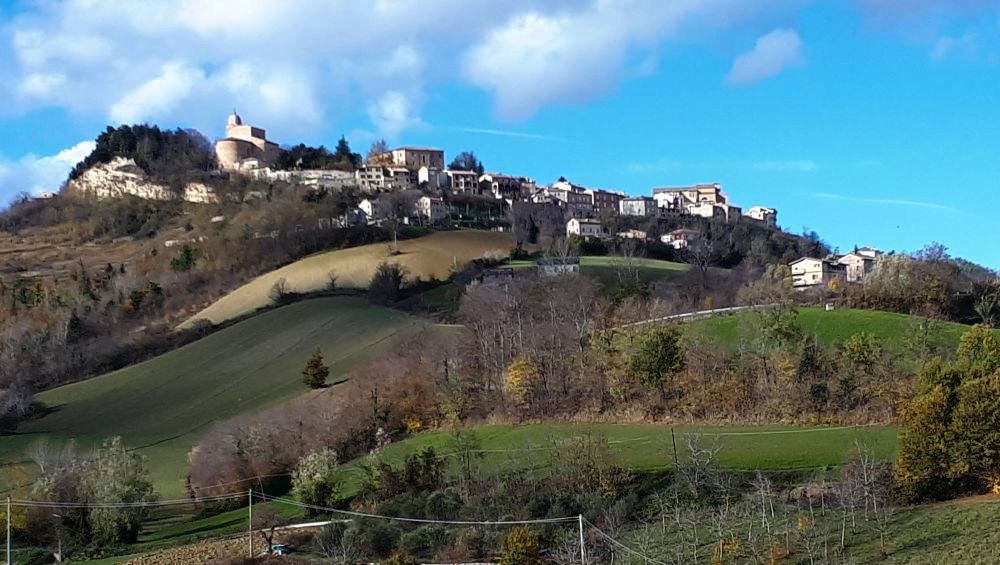 Italy — A Love That Dare Not Speak Its Name

I confess to having a love affair for several years now. We meet once a week and exchange furtive intimacies, and I succumb to the succulent flesh, my tongue dancing at the impending prospects. My lascivious innamorata opens herself up to me as I approach, inviting me to explore her delights with a long, loving rite of seduction. We are totally brazen; the intimate exchange occurs in broad daylight. Lust knows no shame.

At least between me and the weekly fish truck.

This vehicle announces her presence in Santa Vittoria in Matenano — the small, ancient hill town in east-central Italy where my wife and I have lived for five years — around 11:15 Friday mornings with a loud call from a speaker on the roof. “Pesce! Pesce!” can be heard from a half a kilometer away. My ears perk up. Perhaps I even salivate. The truck arrives and maneuvers into the usual spot in the piazza, about 50 meters from our front door. With a softly audible hum, she unfolds herself. As if by magic, the side opens upward and becomes an overhead canopy. A curving glass display case slides out, cantilevering over the cobblestone pavement below. Lights flick on. My love, the fish truck, is open for business.

Suddenly people appear from all directions, like in a well-rehearsed operetta. A collective dance swirls around the display case containing all manner of seafood, some so fresh it is still moving. A black-and-white cat appears from stage left and waits patiently, its front paws tucked side by side.

I join the congregation of my neighbors, craning our necks to peruse the choices available. Hours before, in the early morning darkness, the owner and one of his sons had taken the truck to one of the wholesale markets in a coastal town. There, amid what I imagine to be lots of shouting about selections, quality, and costs, they bargained for the fish to be sold to us that day.

My neighbors and the fish merchant greet one other with a loud “buongiorno!” With his melodic Italian accent, the middle-aged owner shouts “good morning!” to me in English, while displaying a big grin. We have met his entire family now, including his wife and their young child. In warmer weather, she sometimes sits in the truck’s cab with the toddler.

When we go to a favorite beach town in the spring and summer, we often see the fish-truck family strolling through a park while we eat lunch in a café. We suppose they live there since they are often engaged in animated conversations with other passersby. It’s a bit of street theater, as people whiz by on bicycles, mothers push their infants in oversized prams, and matrons scurry about with woven shopping baskets. When a nearby school lets out, the street scene explodes with the squealing of children eager to get home for lunch.

Back to the fish vendor. Our neighbors and I dart around, bobbing our heads, checking out the choices of the day, which differ by season. It’s a delicate dance, as we all must keep in mind who arrived first, second, third, etc. We make sure that the order is correct, to be fair. “Prego!” we say to each other. “It’s your turn.”

I can recall an era, several decades ago, when service counters in Italy were completely chaotic. A dense crowd would press against the counter, yelling out orders. There was no organization, no order. It was every man for himself. Woe to the visiting American who tried to penetrate the boisterous mob.

Nowadays, people look at each other, their facial expressions and hand motions indicating a deferential order. Thank God; the old method had me completely flummoxed, and I would constantly get pushed to the rear. Now the brief wait is pleasant and allows an exchange of pleasant conversation. For me, it’s thrilling to inspect the fish at eye level and make my choice. Often the fishmonger will recommend an item as particularly tasty: “Molto buono!” He is never wrong.

A while back, he touted a shellfish of baffling, if not frightening, appearance. It resembles a large insect with a broad, hard carapace, along with feelers and huge round eyes. Not really eyes, but prominent circular markings on its tail. I can’t seem to get past the blank stare. Nor the legs and feelers, still wiggling in a heap. We have eaten this fish in restaurants. But our attempts to cook it so far have been without success. I don’t consider that a huge loss. There are plenty of other fine choices.

I often narrow my choices to salmon, mussels, tuna, or scampi. Sometimes I snag a flavorful white fish with a name I cannot remember. I just point to it in the bin. One cannot go wrong with any of these. As I ponder my final choice, the vendor spreads out a sheet of thick wrapping paper. He then folds the paper around my selection, weighs it on a scale, and tucks it into a small biodegradable sack. He loudly exclaims “sconto!” (discount!) and announces the price. I toss my euros on the counter and slip back through the clutch of waiting customers.

We usually eat the purchase within a few hours. Whatever the selection, it always results in big smiles and glowing reviews at the table.

One of these days, we’ll figure out that scary shellfish with the fake eyes. That will require a true act of seduction.

Mark Hinshaw
Mark Hinshaw is a retired architect and city planner who lived in Seattle for more than 40 years. For 12 years he had a regular column on architecture for The Seattle Times and later was a frequent contributor to Crosscut. He now lives in a small hill town in Italy.
Previous article
Twenty-two Reasons for Inflation
Next article
Where the Bodies Are Buried: Seattle’s Historic Cemeteries