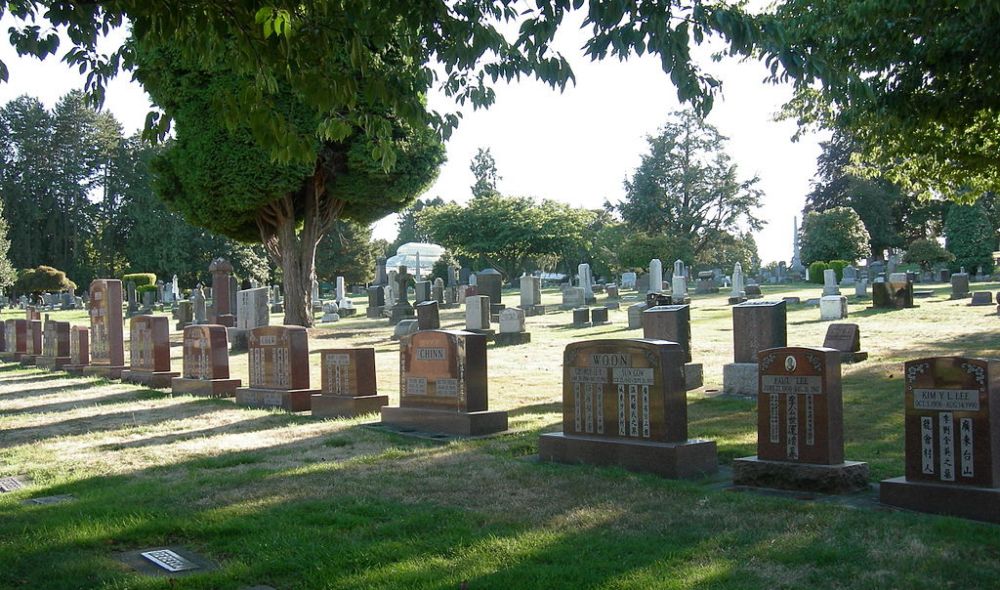 Where the Bodies Are Buried: Seattle’s Historic Cemeteries

James B. Metcalf, Seattle lawyer and former president of the Pioneer Association, wrote a report in 1884 as clerk of the Seattle Cemetery Commission.  There had been confusion about where Seattle’s pioneers were interred, so Metcalf’s commission attempted to resolve the issue. In 1855, four years after Seattle’s founding by white settlers, graves were dug on the east side of what was called Maynard’s Point (named for pioneer David S. “Doc” Maynard), the present-day intersection of Occidental Avenue South and Yesler Way.  It is believed that burials also occurred near the White Church, Seattle’s first house of worship, at the corner of Second Avenue and Columbia Street.

In 1864, David and Louisa Denny deeded six acres on today’s Denny Way (now head offices of the Seattle Park Department) for the City’s first municipal cemetery.  In 1883, the Dennys suggested that the property be used as a park.  The City agreed, and the remains of pioneers were moved to several locations including the Masonic Cemetery next to what is now called Volunteer Park on Capitol Hill.  Three commissioners, including Metcalf, were asked to identify the owners of the original plots.

Metcalf was meticulous in recording where each body was removed and re-interred.  Approximately 30 remains went to existing Masonic and Catholic cemeteries. The remainder – approximately 194 – were re-interred at what was called Lake View Cemetery, the new city cemetery on Capitol Hill.  This hilltop property, with spectacular views of the Olympic and Cascade Mountain ranges, was then far from the city’s center.  The City Surveyor divided the property into 190 groups, and a section of 256 plots was staked off for burials.

In 1872, members of St. John’s Lodge of the Order of Freemasonry acquired land from, again, “Doc” Maynard, as a Masonic Cemetery.  According to Robert L. Ferguson’s 1995 booklet, The Pioneers of Lake View, when “Doc” died on March 13, 1873, his burial had to wait over a month while a road was built from downtown to the new cemetery.

In 1887, Ordinance 877 converted the area into a park eventually called Volunteer Park, its name honoring veterans of the Spanish American War.  Again, remains had to be identified and re-interred in the neighboring Masonic Cemetery (Lake View).  On June 6, 1889, records of the Cemetery Commission were lost in the Great Seattle Fire, but enough information was discovered in later years to provide details of burial sites.

Although Washelli and other cemeteries may disagree, the privately run Lake View can claim to be the City’s Pioneer Cemetery.  For example, besides “Doc” and his long-suffering wife Catherine (her laconic marker reads “She Did What She Could”), the following city founders, among others, are at rest in Lake View: George Kinnear (Queen Anne Hill’s first citizen), Princess Angeline (Chief Sealth’s daughter), Henry Yesler (sawmill owner and mayor), Thomas Prosch (editor of the Seattle Post-Intelligencer and author of a history of Washington), Dexter Horton (founder of what later became Seafirst Bank), Robert Moran (Seattle shipbuilder and mayor), Elisha P. Ferry (Washington Territory’s first governor), Edmund S. Meany (educator and historian), and Arthur Armstrong Denny (leading Seattle founder).

Junius Rochester
Junius Rochester, whose family has shaped the city for many generations, is an award-winning Northwest historian and author of numerous books about Seattle and other places.
Previous article
Italy — A Love That Dare Not Speak Its Name
Next article
On Presidents Day, Our Iconic President