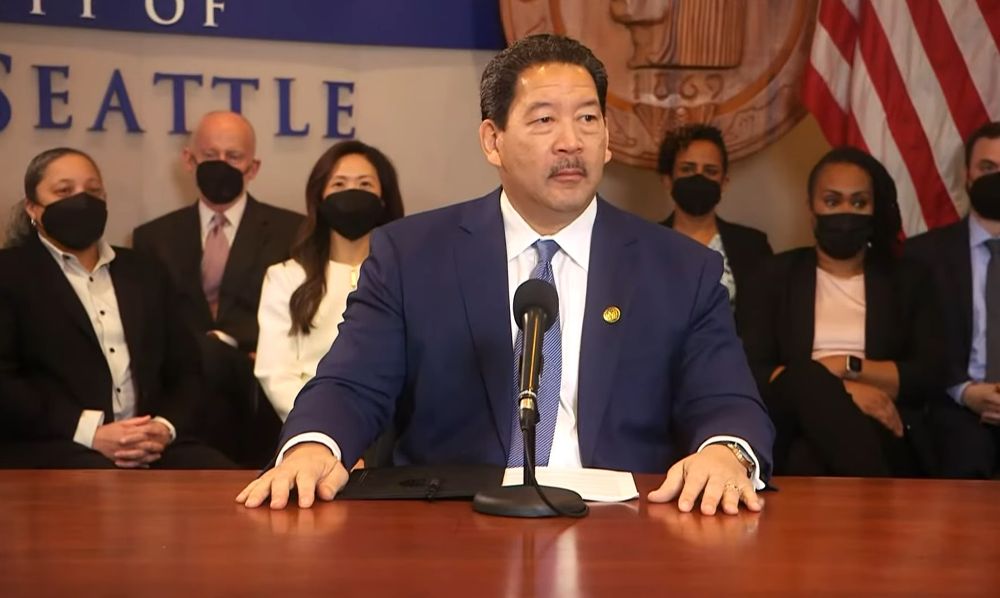 The Harrell Administration: Can you Feel the Love?

I agree with others that the speech ran perhaps 10 or 12 minutes too long (at more than 32 minutes) and veered at times towards becoming a “mind-numbing” (to borrow Tony’s phrase) laundry list. That’s always a danger with these speeches, because when you include one group or department or program or initiative then there’s pressure to name check them all, so that no one feels inadvertently slighted or left out. The love, and the shout outs, end up getting spread around like peanut butter. At Seattle City Hall, everybody’s a winner! This SOTC address suffered a bit from that sort of undifferentiated jumble.

It was certainly a contrast to Mayor Durkan’s SOTC speeches, which in her last couple of (pandemic) years were very short, direct to video affairs lasting only five or six minutes, and taped at locations outside of City Hall. Mayor Harrell’s speech returned to a somewhat more traditional SOTC format, delivering the address from the Norman B. Rice Room (“NBR” in the parlance of City Hall) outside the mayor’s office, where mayoral press conferences are typically held. Given that the Council continues to meet virtually, this was a reasonable facsimile for delivering the speech to a live audience in the Council Chamber, the traditional venue (Harrell was backed by the seal of the city and his senior leadership team, all in (a gold star for color coordination!) black masks.

The speech did suffer from not having a clear centerpiece. It didn’t have what I call a “telegraf,” i.e. the line or short paragraph near the top designed to be the stand out soundbite that the tv reporters will all rip out as the money shot clip that airs on the local evening news.

Nor was there an announcement of some big new proposal or mayoral initiative that would provide the lede and framing for the print reporters. Instead, the mayor bounced between issues and programs — the first half of the speech was focused on the two top issues these days, crime/policing and homelessness — but mostly here the mayor talked about process oriented stuff (working closely with the regional homeless authority, efforts to recruit better cops and staff up SPD), and with taking a victory lap or three (the mayor highlighted recent clean ups of large encampments that were generating neighborhood complaints, and promised to clean up Woodland Park next).

The real point of the speech, rather than announcing some shiny new priority or program, was to announce a new and improved relationship between mayor and Council. Within the first minute he told his Council he would never impugn their integrity, and two minutes in gave an extended and effusive shout out to newly installed Council President Juarez. It’s perhaps not that surprising that Harrell, whose understanding of city government was forged in the crucible of his 12 years on the Council, remains council-centric in his approach. Over the course of the next half hour he positively name checked each of the other eight, promising to work in collaboration with them on their priorities. The not too subtle subtext of that: he wants them to back him on his priorities.

He also offered a welcome shout out to City Attorney Ann Davison, who was noticeably absent from his presser the other week on crime. That’s a positive sign, because if he’s going to make progress on reducing crime — which at the end of the day is what the increasingly anxious and concerned voters will actually judge him on — he needs to get past the “optics of talking to a Republican” (omg, what will Twitter say?) thing and build a productive partnership with the City Attorney’s Office. To invoke those immortal words from Law and Order: in the criminal justice system, the people are represented by two separate but equally important groups…” And Harrell only has oversight over one of them, Davison over the other.

Anyway, it’s clear that Mayor Harrell and his team see the breakdown of the relationship between the seventh and second floors after the 2019 elections, and all of the exhausting ideological sparring and bickering, punctuated by outbreaks of open hostility (like three of the nine councilmembers calling on Mayor Durkan to resign, or Mayor Durkan calling on the then-Council Prez Gonzalez to censure Sawant), as a core problem of governance, and something the voters were sick of when they gravitated to his campaign message of unity. Harrell told the voters he would lead with love, and this speech demonstrated that he’s dead serious about that. The question yet to be answered is whether that’s going to be enough.

Sandeep Kaushik
Sandeep Kaushik is a political and public affairs consultant in Seattle. In a previous life, he was a staff writer and political columnist at the Stranger, and did a stint as a Washington State correspondent for Time Magazine and for the Boston Globe, back in the olden days when such positions still existed.
Previous article
Optimism, Collaboration. A Good Place to Start
Next article
Setting the Tone: The “And” Speech