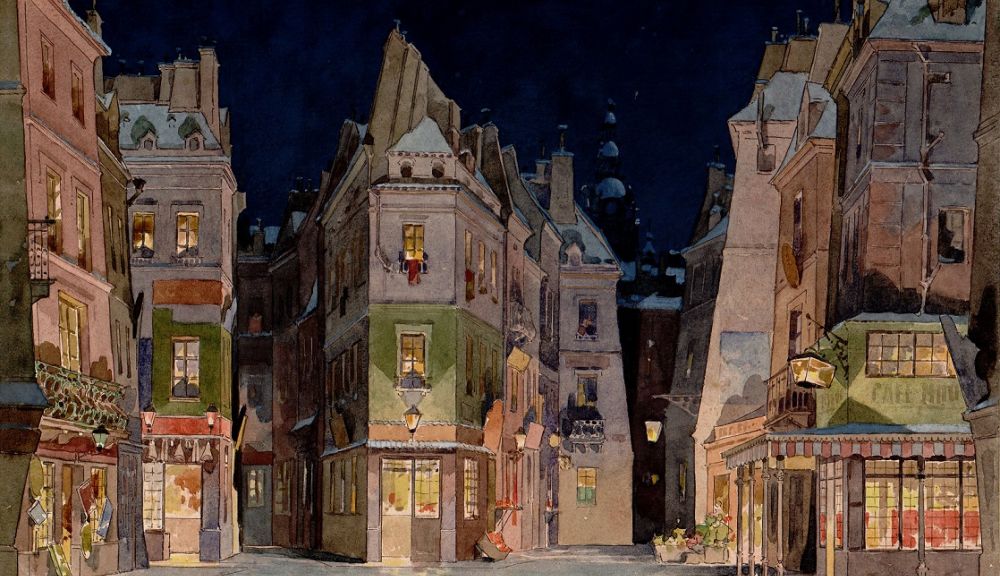 In Giacomo Puccini’s 1896 opera La bohème, Rodolfo, a poet, Marcello, a painter, Schaunard, a musician, and Colline, a philosopher, live together in an unheated Left Bank garret.

When Puccini died in 1924, it was rumored that he was working on a sequel, the reunion of these four when they reached their late 50s. Astonishingly, six months ago, a librarian in Lucca, Italy discovered the first two acts of this unfinished opera, which Puccini titled Les Bohèmes Adultes (The Grown-Up Bohemians).

As the opera opens, the four friends meet in their former garret, now a radiantly remodeled penthouse in the currently fashionable and gentrified Latin Quarter. It is owned by Schaunard, who became a real estate developer.

The four begin to talk and sing about their lives.

Colline sings that his work as a professor of philosophy is rewarding and intellectually stimulating (Aria: Tenure, Buono. Accademico sucko.)

Marcello, a hedge fund partner, agrees. He declares that providing the liquidity that enables capital markets to operate efficiently is more creative and virtuous than painting. (Aria: Due per cento e venti per cento.)

They are interrupted by the manager of Schaunard’s inexpensive loft buildings, who reports that three artists are late on their rent. Remembering the group’s youthful follies with their landlord Benoit, Schaunard tells the manager to act compassionately (Aria: Evicki i bastardi.)

Schaunard suggests they all go to dinner at L’Addition, the two-star restaurant that replaced Café Momus. Rodolfo says he will meet them later, explaining that he must finish some work as he has billed less than his customary ten hours today. (Reprise: Il Conto!  Il Conto!) As he begins to work, he sees through the penthouse’s one-way glass an attractive young woman knocking on the door. “Time is money,” he says as he ignores her.

Rodolfo joins his friends at L’Addition and orders Lyon Quenelle de Brochet. Marcello deplores the state of French politics and condemns wasteful government-welfare programs. Schaunard warns that only the restoration of Bourbon Monarchy can prevent France from becoming a socialist nation. However, Rodolfo and Colline suggest that things might improve. (Duet: Assassinare i socialisti.)

Lead by Coach Papingnol, the Ermitage School soccer team parades by, in celebration of their recent tournament victory. Rodolfo mentions that two of his children attend this school (Aria: Pansare–centomila lira per due bambini?) All four agree that children today have no taste in music, dress poorly and exhibit atrocious table manners (Quartet: Qual è il problema con i bambini oggi?)

Musetta, Marcello’s third ex-wife enters the restaurant and incites Marcello’s jealously by boasting how much the townhouse on Avenue Foch has appreciated since she obtained it in the divorce. (Aria: Stupido asino.) In contemplation, Marcello realizes that he is partially to blame for his marital troubles. (Aria: Le donne sono impossible… qual è il problema con le donne?)

Rodolfo complains that the Sauce Nantua, which accompanies the quenelles, is aqueous.

Steve Clifford
Steve Clifford, the former CEO of KING Broadcasting, has written humor for Crosscut.com and the Huffington Post. He is the author of "The CEO Pay Machine."
Previous article
Carl Bernstein: Life of A Newsman
Next article
Off with his Head! Canada’s Conservative Party Decapitates its Leader