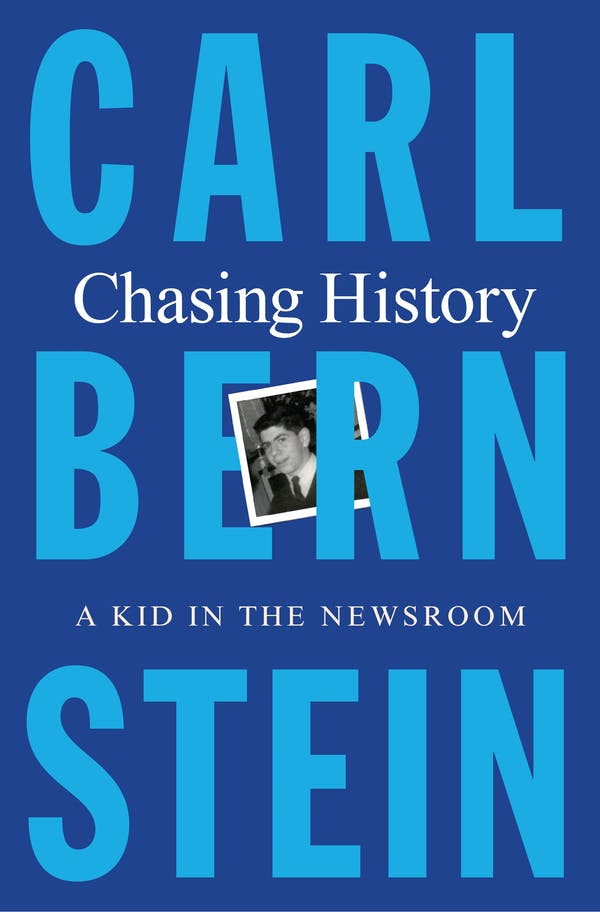 Carl Bernstein: Life of A Newsman

“The door led me into another universe. People were shouting. Typewriters clattered and chinged. Beneath my feet I could feel the rumble of the presses. In my whole life I had never heard such glorious chaos or seen such purposeful commotion . . . By the time I had walked from one end (of the newsroom) to the other, I knew I wanted to be a newspaperman.”

Carl Bernstein was a 16-year-old wayward kid in 1960 when he opened a door to the Washington Evening Star newsroom. The “kid,” who years later would team with Bob Woodward, was interviewing for a copyboy’s job at what was known as “a reporter’s paper.”

Weeks later he landed the job. What sealed the deal? Despite his lousy academic record, Bernstein had demonstrated his ability to type nearly 90 words a minute. (He’d taken a typing class to escape going to wood shop.)

In his new book, Chasing History: The Kid in the Newsroom, Bernstein describes in rollicking detail his five-year apprenticeship at the Star. He ascended from copyboy to “legman,” then dictationist (taking stories by phone), to city desk clerk and pinch-hitting (but never gaining full status) as a reporter. His last summer, he spent two weeks editing the church page, assigning stories, laying out the page, writing headlines, choosing pictures and editing copy.

Bernstein was one of the last of his kind: a national reporter without a degree. After barely scraping through high school, he enrolled at the University of Maryland. He spent three years as a freshman, collecting more than a hundred parking tickets and managing to dodge the draft. After being called up in 1964 he escaped deployment by snagging a hard-to-find spot in an Army Reserve unit.

Bernstein dedicates Chasing History to “those who put me on a path. And to Lance Morrow (a former deskmate and close friend).” Not only did he fall in love with the newsroom but with the quirky one-of-a-kind cast, an extended family of friends, teachers, lovers and mentors. He writes affectionately about many of his co-workers, including some noted Star bylines: David Broder, Mary McGrory, Miriam Ottenberg, Haynes Johnson, and (briefly) Mort Kondracke. Bernstein worshipped his city editor, Sid Epstein, and tried to model himself after that consummate newsman.

In the book’s epilogue, Bernstein reminds us: “it’s important today to remember what Sid’s work was about: putting out five editions a day of a great newspaper whose reporters routinely beat the hell out of the Post in that day and age, and did it with standards style and honesty and a kind of esprit and joy I’ve never seen since in journalism.”

His book is a vivid recounting of the days of hot metal type, composing room mishaps, and roaring presses. It’s also a primer on how to cover the news: doing meticulous research, cultivating sources, keeping files on subjects of interest, agonizing over just the right lede and finding a way to put context into a story. He defines good reporting as “the best version of the truth that you could come up with.”

After discovering the Star would never hire him as a reporter without a college degree, Bernstein left the paper in 1965 for the Elizabeth Daily Journal in Elizabeth, New Jersey, and later the Washington Post. He concluded: “I loved the Star, but it did not quite love me back.”

Jean Godden
Jean Godden wrote columns first for the Seattle Post-Intelligencer and late for the Seattle Times. In 2002, she quit to run for City Council where she served for 12 years. Since then she published a book of city stories titled “Citizen Jean.” She is now co-host of The Bridge aired on community station KMGP at 101.1 FM. You can email tips and comments to Jean at jgodden@blarg.net.
Previous article
Unnamed: When Sources Won’t be Identified
Next article
Scandale: Puccini’s newly discovered La boheme Sequel (Marcello as Hedge Fund Manager)