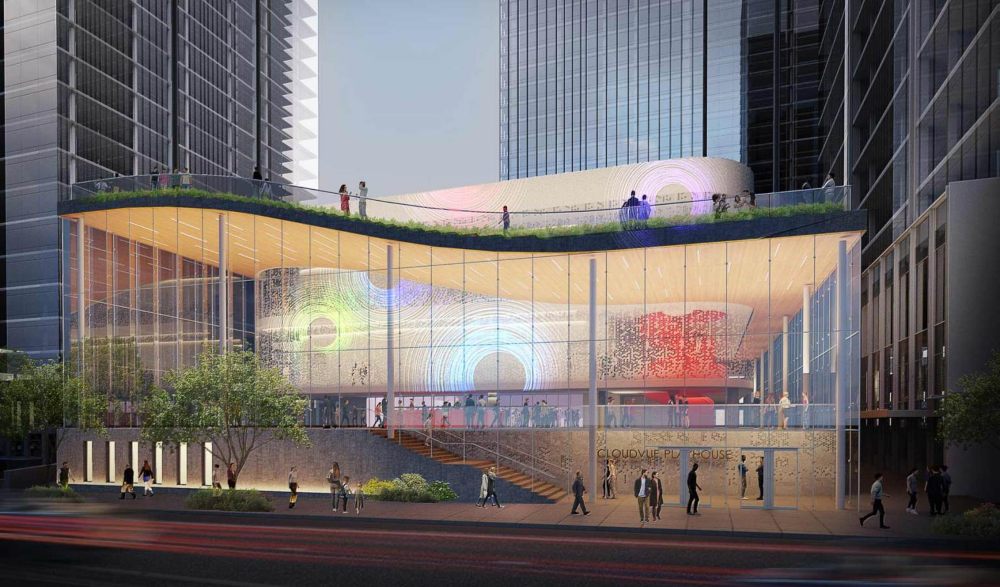 EastHUB: A New Initiative for Arts and an Eastside Theatre

Slowly and perhaps promisingly, progress is being made on building new facilities to nourish culture on the Eastside, a region with lots of jobs, good schools, and highly educated residents–but still just a smattering of the arts. The long delays have produced some needed retooling of the approach.

The new approach is led by an organization called EastHUB, which hopes to build a new 1,100-seat flexible theater, opening in 2026, as part of a large complex of three new 600-foot towers called Cloudvue (two office towers and a high-end residential tower) in the heart of burgeoning Bellevue and adjacent to the new Sound Transit station opening in 2023. In addition, EastHUB is working with numerous developers to embed rehearsal spaces and other art spaces as part of the Eastside’s building boom.

EastHub explains its mission this way:

“EastHUB is a community development organization with a mission to help reshape Bellevue and the Greater Eastside into a regional hub for arts and culture through the creation of an innovative, embedded infrastructure of cross-cultural gathering spaces.

“Our goal is to be a catalyst for this development through an inclusive partnership model that brings developers, municipal and regional governments, arts organizations, culture groups, and the Eastside’s diverse residents together to imagine and design new cultural gathering spaces.”

EastHUB is not an arts organization but basically a co-development organization, hoping to matchmake deals with developers, arts groups and artists. It also plans to be a shared-services company that will help smaller groups with database, fundraising, marketing, and networking services. Its goal is to let many flowers bloom and to save money by leveraging developers’ investments in parking, infrastructure, and land acquisition so that costs are saved and more groups (amateur and professional) are served.

At the helm of this new approach is Ray Cullom, who has experience in arts management and construction of arts facilities. Cullom originally arrived on the scene as the new CEO of the Performing Arts Center Eastside (PACE), formerly named the Tateuchi Center after the lead donor. PACE, which has been struggling for years to raise funds, is a proposed 2,000-seat multipurpose concert hall as well as a 225-seat theater for jazz, blues, vocalists and other local performers. The multi-purpose center, set amid the Kemper Freeman-developed Hyatt Regency Hotel in downtown Bellevue, adjacent to Bellevue Square, is designed to be an arts education center by day, as well as a conference facility. Its gestation period has been very long, such that some critics wonder if it is the right size, in the right location, and is too much of a reach for Eastside donors.

Within 18 months of arriving for this PACE Job, Cullom resigned his post and six months later got involved in the new initiative, EastHUB, which was jump-started with some seed money from Microsoft and the $45 million donation of land and infrastructure from Lawrence Lui, the San Francisco developer of the ambitious Cloudvue mega-project.

There are two important re-sets going on. One is for the Eastside to think more opportunistically and on a smaller scale, in addition to the big dream of the PACE Center. Years of fundraising leaves the PACE project in some doubt, in part because no major arts organizations have yet agreed to fill the new hall, and also because costs have risen significantly. (It’s costly construction to insert a full concert hall into an existing hotel complex.)

And so, rather than just waiting for this big ship to sail into town, EastHUB wants to plant a lot of seeds and not be defined by or dependent on high-cost, stand-alone arts buildings. Instead, it hopes to tag along behind the building boom (Amazon and others) in Bellevue and elsewhere on the Eastside, using public-amenities bonuses to reward developers with greater height and bulk. Cullom notes, for example, that Facebook might help construct arts facilities in another transit node in the Spring District, northeast of Bellevue and halfway to Redmond.

Cullom, who has been involved in several major projects around the world, says that the “old way” has been to draw up big plans for a cultural palace, get 35 percent as a lead gift, and then raise the money over years and open the grand facility (whereupon arts organizations find themselves in the real estate business). EastHUB hopes to be more responsive to broader community needs and to save 65 percent of the building costs by sharing development with an office tower or condominium project. That ties the Eastside’s arts development to the corporate developer business and values. Seattle has one cautionary example of this, which was the Seattle Art Museum’s joint development deal with the Washington Mutual headquarters tower. That deal that turned perilous when the bank ran into financial trouble and was forced to sell to JP Morgan Chase Bank in 2010.

The other re-set is that EastHUB hopes to get immediate traction by lowering costs and delays and serving some of the many more modest and home-grown arts groups on the Eastside. Surrounding regions such as Auburn have gone ahead and built facilities, while the affluent Eastside has only a small portfolio, considering all its wealth. It has built a small arts museum with no collection, a flourishing family-oriented musical theater in Issaquah, a conference center theater in downtown Bellevue, a small performing arts center and a visual arts center in Kirkland.

This modest growth is partially attributed to a quietly protectionist stance of Seattle major arts groups, who naturally worry about lost audiences and donors. Historically, the Seattle major arts institutions have counted on Eastsiders to make up a significant portion of their audiences and supporters. There have been only a few joint initiatives. Pacific Northwest Ballet opened a dance school on the Eastside, Seattle Opera once had a young artists program which used the convention center hall for performances, and the Seattle Chamber Music Society for a few years put on programs at Overlake School’s auditorium.

Asked about examples of twin cities that share arts organizations effectively, Cullom gave one example of how not to do this, San Francisco. That city, he says, informally enforces an informal 60-mile-radius rule that demands that any plans for growth or new institutions within that circle must seek permission from the majors. (To be sure, arts venues generally enforce geographic non-compete clauses for artists and touring companies when they come to a city.) A more positive example is Minneapolis-St. Paul, the former with a major symphony orchestra and the latter with the nationally acclaimed St. Paul Chamber Orchestra, now with active satellite venues throughout the metro area.

Regardless of past history, the Eastside has evolved into a full-fledged urban region (Bellevue’s population is 144,403, and the Eastside’s is 630,000). It has a surging and dynamic tech-based economy and Bellevue leadership group that is actively raiding Seattle-weary businesses such as Amazon to the Eastside’s friendlier and safer environment. It is also a region notably lagging in arts and cultural attractions.

All the time, commuting into Seattle for the arts is more costly and a hassle. These new factors suggest that Seattle arts groups also need to pay more attention to suburban patrons and encourage building places for performances. Cullom says it would be foolish for the Eastside’s arts to be “duplicative.” He envisions not an Eastside Symphony, since the Bellevue Philharmonic folded ten years ago, but instead a program where a few Seattle Symphony players perform together with Eastside-based South Asian musicians.

All this sounds like traction at last for the Eastside. Cullom says that EastHUB strongly supports completion of PACE Center, but EastHUB’s initiatives might also be a way for Bellevue to advance beyond the elusive dream of a major concert hall and build more quickly to serve a more dispersed, diverse community.

There are some cautions, along with a history of stalled or underperforming cultural projects. Among the worries: tethering arts institutions to corporate and developer goals; limited support for the arts by tech employees; rivalries among Eastside cities for dominance; congestion on I-405 in getting in and out of Bellevue; and the towering Cloudvue architecture, which buries a theater in corporate bling, a problem SAM also faces.

Still, EastHUB could be a light in the long tunnel of arts development east of Lake Washington. Who knows? It might even reverse the current imbalance of trade between Eastside and Westside, and become an arts-development idea worth importing to Seattle. The pandemic and shrinking arts funding from foundations, corporations, and the government have created a need for less-costly and broader-based models.