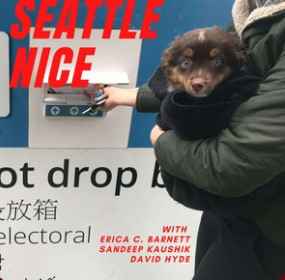 It’s now clear that Seattle City Councilmember Kshama Sawant has (narrowly) survived the effort to recall her from office. The question is: why? Was it the vaunted ground game run by Kshama’s Socialist Alternative red-shirted volunteer shock troops? Or the weakness of the charges against her? Or the unusual demographics of her Council district? Or because the recall really was “racist” and “right wing”? And what does her narrow escape mean going forward for Seattle’s most controversial politician?

PubliCola editor Erica C. Barnett and Post Alley writer and public affairs consultant Sandeep Kaushik, both former writers at the Stranger, dissect the Sawant recall in the 28 minute pilot episode of their Seattle Nice podcast, with KUOW politics reporter David Hyde directing the conversation. While Barnett highlights Sawant’s Get Out the Vote Efforts as having significantly boosted turnout in her favor and dismisses the actual charges against her as underwhelming, Kaushik points to the increasingly youthful skew of the district — nearly a third of registered voters in Sawant’s district are in the 25-34 year old age band — and the uniquely polarizing appeal Sawant has in the district as the primary reasons for her survival. Along the way the trio offer some inside scoops on Socialist Alternative’s surprising position on recall elections, as well as revealing which HBO series the Seattle City Council’s only self-proclaimed Trotskyite binge watches.

Looking forward to what happens next, neither believe that Sawant’s narrow escape will change her divisive and uncompromising approach to governing at City Hall. Preferring denunciation to dialogue, even on election night Sawant once again called out her progressive Council colleagues as sell outs and appeasers. And both agree that, her victory over the recall notwithstanding, these results indicate that Sawant will have real trouble getting re-elected in 2023 if a strong progressive challenger emerges.

You can listen to their assessment here.

Sandeep Kaushik
Sandeep Kaushik is a political and public affairs consultant in Seattle. In a previous life, he was a staff writer and political columnist at the Stranger, and did a stint as a Washington State correspondent for Time Magazine and for the Boston Globe, back in the olden days when such positions still existed.
Previous article
Mercer Island: The Partisanization of a Local Government
Next article
EastHUB: A New Initiative for Arts and an Eastside Theatre