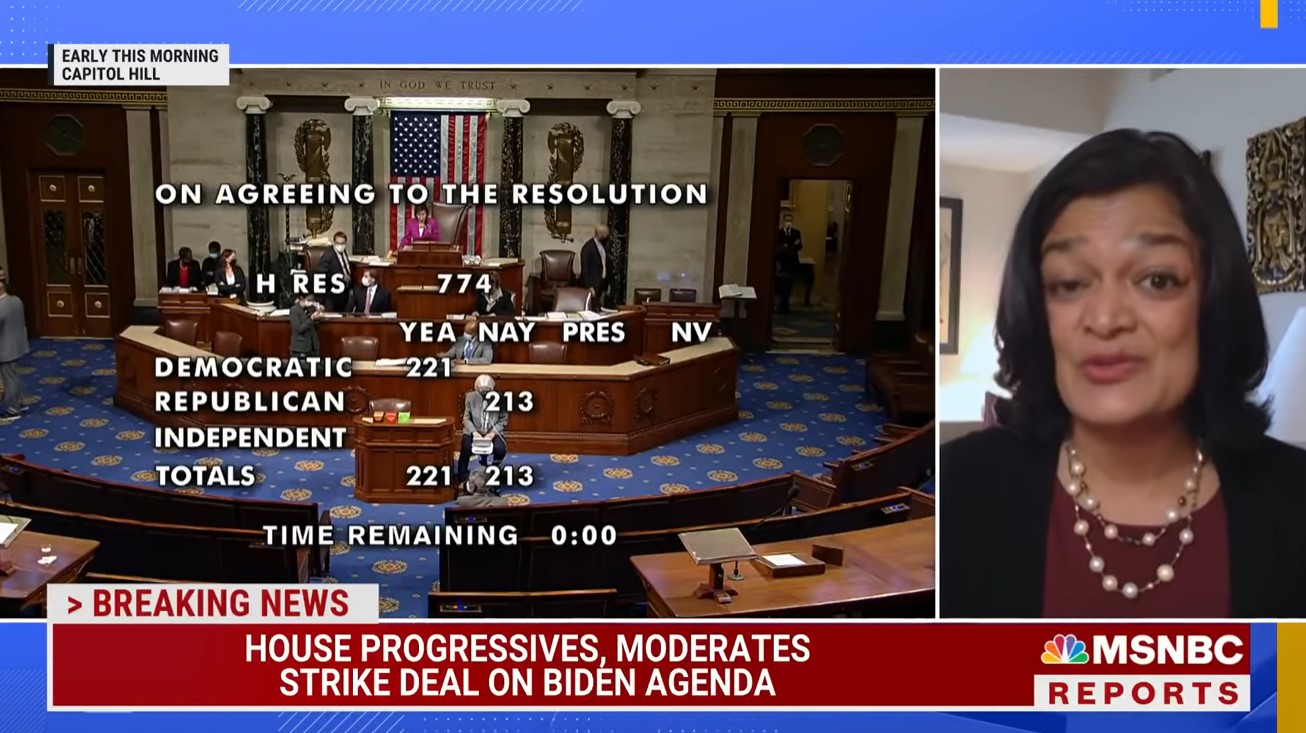 What has been a darkening autumn for President Biden, beset by controversies and with his poll approval taking a dive, has turned into springtime for Seattle Rep. Pramila Jayapal, D-Wash., the mediagenic leader of the Congressional Progressive Caucus.

She has been omnipresent on MSNBC and CNN, adoringly interviewed by Joy Reid and Rachel Maddow. Katrina vanden Heuvel, publisher of The Nation, opined this week in the Washington Post: “No longer will corporate Democrats be free to call the shots in the House. As (Nancy) Pelosi heads toward retirement, Jayapal has shown the sophistication and discipline to step into her shoes.” The column bore the headline, wishful and premature, “Pramila Jayapal has made her case to be Pelosi’s successor.”

Jayapal has certainly shown fleet footwork. As late as 4 pm as the House prepared to vote on the Senate-passed infrastructure bill, Jayapal sent out a statement that Progressive Caucus members were prepared to vote against it.  The CPC was quickly bombarded by Biden and Pelosi. Only six out of 98 Caucus members – ultra-left members known as “the Squad” – ultimately voted Nay, and Jayapal voted Aye. With the Progressive Caucus having delayed infrastructure, insisting Congress simultaneously pass the President’s Build Back Better legislation, Jayapal flew home to Seattle and touted what Washington will get out of the infrastructure package.

Jayapal is a team player and also a politician with a tailback’s sense of timing.  She delivered Ed Murray a key progressive endorsement in the 2013 Seattle Mayor’s race. Jayapal was residing in the 9th Congressional District when Seattle’s 7th District Congressman-for-life Jim McDermott announced he would not run for reelection in 2016. Darting to the opening, Jayapal moved to replace him, capturing what may be America’s safest U.S. House seat.

When Democrats retook the House in 2018, Pelosi faced rumblings of opposition as she sought a return to the Speaker’s chair. With only a single term under her belt, Jayapal negotiated choice committee assignments for newly elected Progressive Caucus allies.  She then delivered to Pelosi a much-sought endorsement.

But there’s a Democratic world beyond the activist Twitter left. The Progressive Caucus numbers fewer than half the 221 Dems in the House. and almost all progressive members represent safe seats. However, many party moderates come from competitive districts, suffering losses in 2020 as Republicans exploited such issues as calls to defund the police.

Jayapal took a rare D.C. hit recently when a Buzzfeed investigation depicted her as the bad boss with an stressed-out, overworked, underpaid staff with aides frequently departing.

The flip side: Jayapal has an exceptional, Clinton-like ability to explain in human terms the benefits of complicated legislation. Her forte is messaging, where Democrats often flop.  She steers every conversation about Build Back Better to its benefits, not politics and price tags. A typical Jayapal Tweet:  “With the Build Back Better Act, families will pay no more than 7 percent of their income for affordable, high-quality health care.”

Jayapal is a player pushing the Democrats’ playbook to the left. But how far will the Senate go with open resistance from Sens. Manchin and Kristin Sinema?  Will clumsy pressure from the woke-left alienate these holdouts and other Senate moderates? Can Jayapal control her troops, whose favorite word seems to be “demand”? Such will be the ultimate tests of Pramila Jayapal’s timing, open-field running, and messaging.

Joel Connelly
I worked for Seattle Post-Intelligencer from 1973 until it ceased print publication in 2009, and SeattlePI.com from 2009 to 6/30/2020. During that time, I wrote about 9 presidential races, 11 Canadian and British Columbia elections‎, four doomed WPPSS nuclear plants, six Washington wilderness battles, creation of two national Monuments (Hanford Reach and San Juan Islands), a 104 million acre Alaska Lands Act, plus the Columbia Gorge National Scenic Area.
Previous article
Roadmap: How Trump Plans to Ensure a 2024 Win
Next article
Seattle Symphony: With and Without