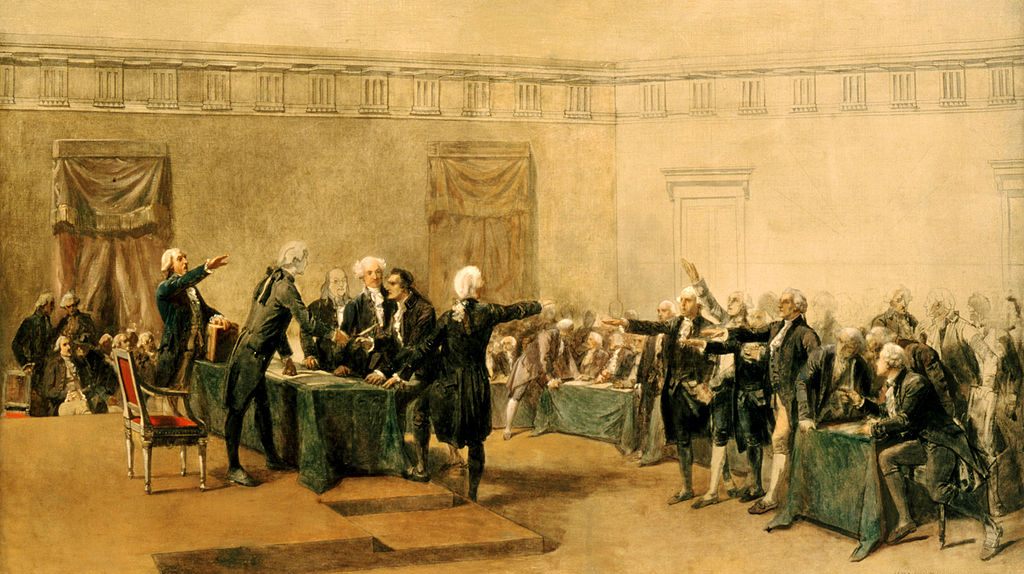 comes from that foolish/inspiring episode when the city’s leaders responded to the loss (to Tacoma) of the Northern Pacific’s terminus. Instead, the good citizens turned out on May Day, 1874, to try to build a narrow-gauge railroad to Walla Walla. It got as far as the Duwamish Valley coalfields, stumbling into a new export industry. Women on that May Day prepared a big picnic for the amateur track-layers.

Speeches ensued, including one from John Denny, the Whig-politics father of the pioneer Denny brothers (Arthur and David). Then came Henry Yesler, sawmill owner, who made a famous, seven-word speech, very applicable today: “Let’s quit fooling and get to work.” (Source: Archie Binn’s Northwest Gateway, page 214.)

alludes to “Madison’s Moment” in 1789 at the Constitutional Convention, which Joseph Ellis (in American Dialogue) describes, including the two years leading up to the Constitution writing, as a period that “just might constitute the most brilliant political performance in American history.”

Writing that constitution was a remarkably bold act, brilliantly organized by the diminutive James Madison. His main tactic was to propose a very strong remedy for a country that was falling apart at the seams (broke, poor infrastructure, no pensions for veterans, beset with rebellion that threatened a partitioning of the country). Madison induced George Washington to re-enter politics by chairing the convention. He stole the march on the disunified moderates. He studied history of republics (and their flaws) and revived John Adams’ seminal idea of a self-regulating tripartite government. Some aspects of the scheme, such as federal veto of state laws, did not survive, but Madison’s Moment did. Still does.

I take away two lessons from Madison’s remarkable stroke of statecraft. One is that you have to have a bold plan and then really sweat the details, as the superbly prepared Madison did. (His detailed note-taking is the main reason we know about those Philadelphia deliberations.) The other lesson is that there is a tide in American politics where things jump forward in a sweeping way, rather like “punctuated equilibrium” in evolution. Historians often say that constitutional reform comes in waves. We may be in such a moment now, as the Biden team seems to believe, even with its slim majorities. Jayapal’s Moment?

is how to lead at another time when things fall apart. Lincoln, like Madison, was a master navigator between narrow straits, and he knew how to make the center fun, creative, and idealistic, often using frontier humor and play-acting. He wasn’t just a neutral dealmaker, since his core values — rights-equality, antislavery, and pluralistic national unity — were always driving him and memorably phrased.

There was much art to this artful and disciplined balancing act, as historian Reynolds (page 455) puts it:

There are clear takeaways from America’s greatest president. To be an effective leader in a deeply divided time, keep to the center while clinging to the nation’s core principle of human equality. Make the center lively — even at times shocking. Don’t insult your opponents. And don’t forget young voters.

David Brewster
David Brewster, a founding member of Post Alley, has a long career in publishing, having founded Seattle Weekly, Sasquatch Books, and Crosscut.com. His civic ventures have been Town Hall Seattle and FolioSeattle.
Previous article
Depleted Western Washington Federal Court Gains Pathbreaking New Judges
Next article
Gettin’ Down with the New In Crowd (A Primer)