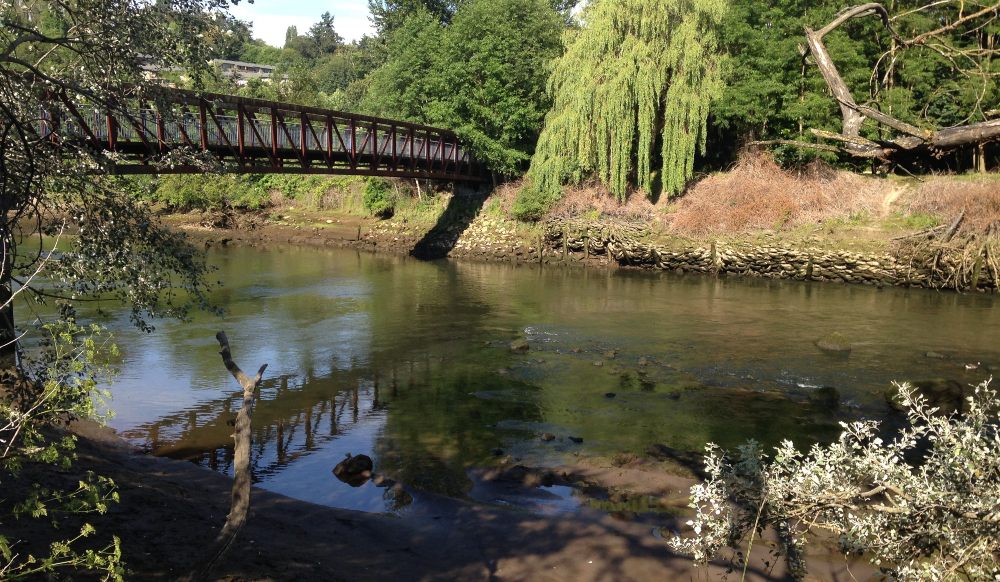 Six years ago, when I was still a member of the Seattle City Council, I took a kayak tour of the Duwamish River, Seattle’s only river. The waterway had been declared a Superfund Site in 2001 and we were taking a tour to view early cleanup results.

We launched our kayaks at a site near Tukwila and paddled North alongside a group that included two other councilmembers and a savvy tour guide. On that sunlit morning, an osprey circled overhead, and the river looked deceptively pastoral and untouched. But over the years, the Duwamish had suffered many changes —  “tamed,”  straightened, dredged, and badly abused by nearby industries.

About midway, we beached at a landing in South Park. That gave us an opportunity to talk to residents who were encouraged by the city’s active participation in clean-up. Seattle, King County, the Port of Seattle, and Boeing, designated as “potentially responsible parties,” had formed the Lower Duwamish Waterway Group (LDWG), a private-public partnership, to work with the EPA to devise plans to clean up the river. The previous year (2014) — more than a dozen years after the superfund site designation — the EPA had issued its “Record of Decision,” a plan to clean up the rest of the river’s sediments, managing ongoing pollution and restricting levels of chemicals that could remain. For Seattle, the Duwamish River and the many diverse residents who live in the valley that was welcome news.

During my final year in office, Seattle councilmembers contributed to the good news by  approving Resolution 31567. Passed unanimously in February, 2015, the resolution acknowledged the need to involve the community in clean-up plans. It stressed an obligation “to protect the health of diverse communities” and to proceed by using a race and social justice lens.

Since then there has been steady progress. Five highly toxic areas — termed “Early Action Areas” — have been cleaned up. New habitat has been restored along the river banks. The average concentration of PCBs — a highly carcinogenic chemical banned from production in 1972 — has been reduced by half in the river’s surface sediments.

However, that promising beginning may have been illusory. In recent years – significantly during the Trump era of climate denial — there has been pressure on the EPA to roll back cleanup requirements, allowing higher levels of PCBs and other chemicals. In a Sept. 10 Seattle Times guest opinion, leaders of the Duwamish River Cleanup Coalition, a community-led organization, accused local governments of lobbying the EPA to weaken the river cleanup plans, reducing the cost of their obligations. Unbelievably, those are the very same governments that – like Seattle — have passed policies to promote environmental justice.

For whatever underlying reasons, the EPA has now released a proposal to allow seven times more cancer-causing hydrocarbons in the Duwamish River. In the river’s East Waterway, EPA is planning to allow 15 times more PCBs, three times more arsenic and five times more dioxins than the 2014 decision allows.

To understand how the Duwamish became so compromised, it helps to look at Seattle history. I’ve learned a great deal from The River that Made Seattle, a 2020 account by B. J. Cummings, who was a founder of the Duwamish River Cleanup Coalition and has become a key figure in the river’s restoration effort.

As Cummings documents, Seattle was born on the banks of the Duwamish, growing from the river’s rich resources. But that growth came at a very high cost. The river has seen nearly 100 years of industrial activity that has included manufacture of airplane parts and the production of asphalt, the building of ships and the shipping of goods. These activities enriched the city, but left behind an unholy stew of industrial pollution.

During those formative decades, land around the Duwamish acquired a diverse population. In the mix are the original resident native Americans, Italian and Asian farmers, as well as waves of immigrants, speaking several dozen native tongues. Recent assessments have shown the population between 52-71 percent nonwhite and 39.5 percent below poverty level.

These residents suffer health deficits, daily exposure to the products of the region’s industries. They are exposed to the highest levels of particulate matter and the second highest levels of benzene. In his 2009 book Emerald City: An Environmental History of Seattle, history professor Matthew Klingle placed blame on the tradeoff exacted in the 1960s when Metro cleaned up Lake Washington but did so at the expense of the Duwamish Valley area. He called it “the devil’s bargain.”

Results of that sinful bargain became clear on Sept. 13, 2001 when the EPA not only named the river a Superfund site, but tagged it as the most polluted river in the United States. The EPA made that determination and, with input from the local community, finally came up with the 2014 cleanup proposal.

That was then. Now in 2021, the agency has backed away, significantly watering down its initial plan. In their Times opinion article, leaders of the Duwamish coalition strongly objected, called for the weakened changes to be rescinded, demanded that the community be consulted on renewed efforts. The three authors — coalition director Paulina Lopez, superfund manager James Rasmussen, and Duwamish historian Cummings — demanded health justice, “especially for community members who have been historically marginalized, silenced, and burdened with the legacy pollutants that have given rise to the cleanup.”

The coalition called on every candidate now running for city, county, and port offices to commit to the 2014 river cleanup decision. Given that the three governments have resolved to support environmental justice, those candidates have a special responsibility to make clear their positions on the long-delayed and now suddenly jeopardized clean-up.

Jean Godden
Jean Godden wrote columns first for the Seattle Post-Intelligencer and late for the Seattle Times. In 2002, she quit to run for City Council where she served for 12 years. Since then she published a book of city stories titled “Citizen Jean.” She is now co-host of The Bridge aired on community station KMGP at 101.1 FM. You can email tips and comments to Jean at jgodden@blarg.net.
Previous article
A Moment of Truth Arrives for Biden and the Democrats
Next article
German Election: Deep Divisions in Deciding Who Will Replace Angela Merkel