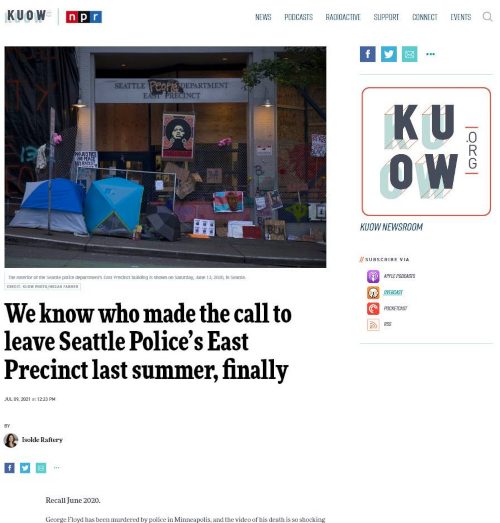 Drawing on 2000 pages of public records, including emails, texts, and other communications, as well as candid, off-the-record conversations with multiple police and other City of Seattle sources, Isolde Raftery at KUOW has produced a gripping, nuanced and detailed account of the sequence of events that led to the abandonment of the East Precinct and the formation of CHOP/CHAZ last summer.

Raftery’s must read reporting is, as one political insider said to me, “a real contribution to public knowledge of consequential moment of [Seattle’s recent] history.”

With Mayor Durkan and former Chief Carmen Best having consistently avoided addressing what actually happened in any detail, it’s by far the best reporting that has been done on the (until now) strange mystery of who actually issued the order to abandon the precinct, and why and how that order came to be. It captures the complexity of the real time internal decision making that was happening in the midst of a complicated, volatile and fast evolving situation.

Raftery also deftly captures the power dynamics and tensions roiling SPD leadership, and between the mayor’s office and SPD command staff, during that period. With the Office of Police Accountability slated to release a report on its investigation of the circumstances leading to the East Precinct abandonment in the next few weeks, there are likely more details to come, but it’s unlikely that investigation will do much to alter the basic outlines of the narrative that Raftery provides here.

As for who delivered the order, you’ll just have to read the story…

Sandeep Kaushik
Sandeep Kaushik is a political and public affairs consultant in Seattle. In a previous life, he was a staff writer and political columnist at the Stranger, and did a stint as a Washington State correspondent for Time Magazine and for the Boston Globe, back in the olden days when such positions still existed.
Previous article
Four Americas: George Packer Breaks it Down
Next article
A Referendum on Seattle: Ten Issues Mayoral Candidates Could Run On