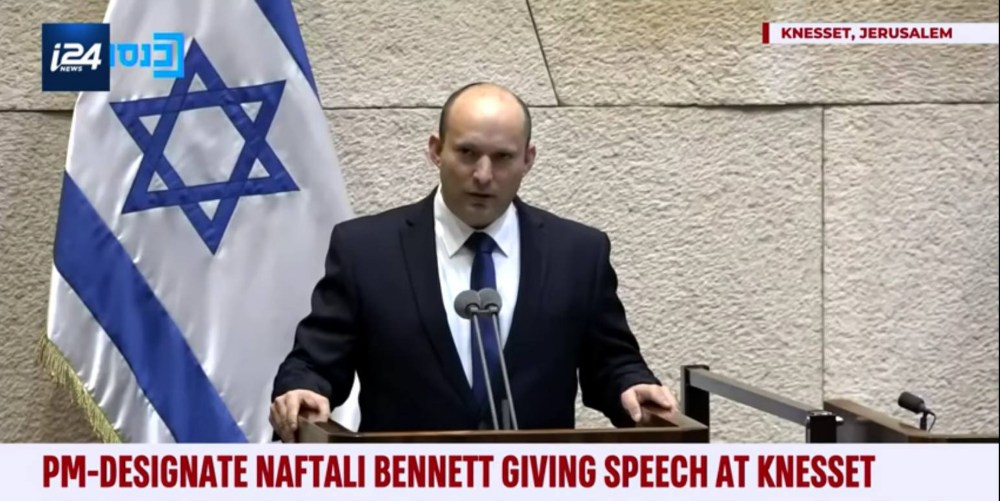 After Twelve Years as Israeli PM, Netanyahu pried out of power

A deeply divided Israeli parliament swore in ultra-nationalist Naftali Bennett as prime minister Sunday to lead an unwieldy governing coalition united by little more than their determination to end the 12-year reign of Benjamin Netanyahu.

The 60-59 vote in the Knesset reflected the razor-thin majority of the eight-party coalition that spans the political spectrum and for the first time in Israel’s history includes an Arab party.

Bennett hailed the diversity of his coalition and alluded to Netanyahu’s refusal to negotiate or compromise with opponents as having “burnt the house down on top of us.”

“I am proud of the ability to sit together with people with very different views from my own,” he told lawmakers ahead of the vote.

But as leader of a far right-wing party holding a mere seven seats in the 120-member Knesset, Bennett will be challenged from Day 1 to keep the disparate factions focused on domestic and economic issues they can agree on. And despite his known support for annexing West Bank territory that would preclude the Palestinians ever forming a viable independent state, Bennett’s hands will be tied by the more moderate factions in his coalition if he wants to avoid losing any party’s support to Netanyahu in his new role as opposition leader.

Netanyahu did not go quietly. Channeling his inner-Donald Trump, he accused his opponents of election fraud, refused to resign after failing to put together his own governing alliance and has yet to vacate the prime minister’s official residence. Netanyahu’s supporters have been protesting outside the homes of his political opponents and calling in death threats to their families.

In a fiery address before the vote to replace him, Netanyahu warned that Bennett’s government is too weak to stand up to Iran and its nuclear ambitions and would likely cave to U.S. pressure to make concessions to the Palestinians to revive long-stalled peace talks.

Netanyahu accused Bennett’s coalition of plotting to enact “fascist laws against my candidacy in the language of North Korea and Iran.” He appeared to be referring to speculation that the new Knesset majority might impose term limits and a ban on candidacies by politicians under indictment.

The 71-year-old Netanyahu is on trial for alleged corruption and abuse of power, a case in which his chances of escaping conviction would be significantly enhanced were he still the elected prime minister.

“If it is destined for us to be in the opposition, we will do it with our backs straight until we topple this dangerous government and return to lead the country in our way,” he said. “We’ll be back soon.”

Bennett, the 49-year-old son of American immigrants and a high-tech magnate, began his political career in alliance with Netanyahu. He first served as chief of staff to his erstwhile mentor, and later as defense minister, education minister and economics minister. He is even farther to the right than Netanyahu in defense of expanded Jewish settlements in West Bank territory the Palestinians need to form their own state.

President Joe Biden congratulated Bennett on his new role, and Bennett, despite criticism of U.S. policy on Iran and Palestinian affairs, praised the Israeli-U.S. relationship as strong and supportive of his nation’s security concerns.

Bennett’s motley coalition with a one-vote majority is the brainchild of Yair Lapid, head of the centrist Yesh Atid party with 17 Knesset seats. Netanyahu’s Likud Party retains the largest parliamentary delegation with 30 members. Under the coalition agreement, if it survives, Lapid is to succeed Bennett as prime minister in two years.

Ra’am, the United Arab List representing Israeli Palestinians, is the first Islamist party to serve in an Israeli government. It has an agenda with little in common with Bennett’s. The party is expected to remain committed to coalition unity in return for greater government outlays for housing, infrastructure and self-policing in Palestinian communities. Arab Muslims comprise almost 20% of Israel’s 9 million population.

The immediate challenge for Bennett’s government will be to pass a budget in the next three months. Political gridlock under Netanyahu has prevented agreement on how to fund government for more than three years. If Bennett’s coalition fails to produce a spending plan, the Knesset will be dissolved, and a new election will be called – the fifth vote in little more than two years.

Headwinds confronting the new coalition were unleashed by Netanyahu backers during the debate ahead of the Knesset vote to approve it. Lawmakers jeered and heckled Bennett during his address, despite his policies largely being in alignment with Netanyahu’s. The disruptive spectacle prompted Lapid to apologize to his 86-year-old mother and the rest of his countrymen.

“I wanted her to be proud of the democratic process in Israel. Instead, she, along with every citizen of Israel, is ashamed of you and remembers clearly why it’s time to replace you,” Lapid said of Netanyahu and his noisy allies. Bennett focused his speech on pledges to make life better for Israelis but clung to many of his predecessor’s controversial policies. He said he opposed U.S. efforts to restore the 2015 Iran nuclear deal agreed among the world’s major powers to prevent Tehran from developing nuclear weapons. Former President Trump effectively quashed the agreement by unilaterally withdrawing the United States from the accord and refusing to provide sanctions relief promised to Iran in return for its concessions to enrichment reductions and U.N. inspections.

“Israel will not allow Iran to arm itself with nuclear weapons,” Bennett vowed. “Israel will not be a party to the agreement and will continue to preserve full freedom of action.”

The outgoing head of Israel’s Mossad intelligence agency, Yossi Cohen, seemed to acknowledge in an interview with the Israeli television news investigative program “Uvda” aired last week that his agents were behind two massive attacks over the past year on the Natanz uranium enrichment facility. Cohen also intimated that Mossad carried out the November assassination of Mohsen Fakhrizadeh, founding scientist of Iran’s military nuclear program that Tehran says was abandoned in 2003.

While Bennett made clear he opposes resurrection of the Iran nuclear deal, European Union negotiators over the weekend expressed rising hopes for U.S. re-entry to the accord.

Carol J Williams
Carol J. Williams is a retired foreign correspondent with 30 years' reporting abroad for the Los Angeles Times and Associated Press. She has reported from more than 80 countries, with a focus on USSR/Russia and Eastern Europe.
Previous article
What in the Sam Hill! A Remarkable Northwest Pioneer
Next article
Portland: Down in the Dumps