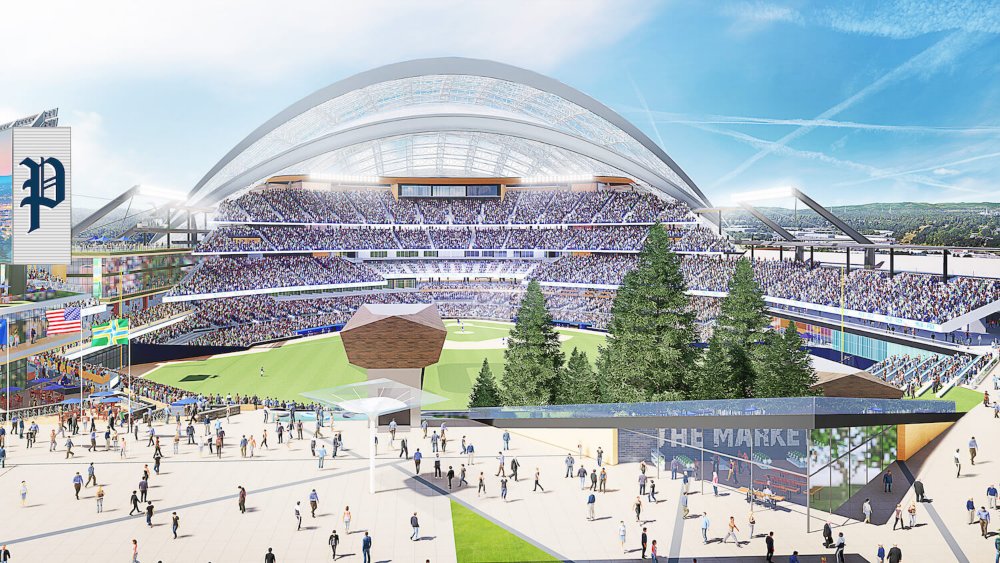 Do it for Ellis: Pro Baseball Looks at a team for Portland

When we left Seattle nearly a year ago, my only real regret was that for the first time in my life – with the exception of the four years I spent as a reporter at the Anchorage Times in the early ‘80s – I would be living in a city without a Major League Baseball team.

Of course, many of you can muster a serious case that big league baseball has not been practiced in Seattle since 2001, the year the Mariners won an unfathomable 116 games – and still failed, as they have since their inception 44 years ago, to make it to the Fall Classic.

Now we are ensconced in a small windy village on the northern Oregon coast. I’m sure all of you have heard of it – Manzanita. It’s been all the rage for decades now. Just 700 people live here year-round, but on summer weekends, or any warm sunny day for that matter, the town’s population can swell up to 5,000 beach towel-toting souls.

Used to be, when we first visited Manzanita back in 1990 – my second year at the now-defunct Seattle Post-Intelligencer – colleagues at the paper were plainly perplexed as to where this sleepy little town was located, never mind our deep attraction to it. My standard reply: Manzanita is about fourteen miles south of Cannon Beach. That usually did the trick.

Manzanita is 92 miles from Portland, but it’s not like driving from Seattle south on “The Five.” That’s right, I’m from California, the Bay Area to be more specific, home to my beloved San Francisco Giants, who, by the way, are sitting atop the NL West, by far baseball’s toughest division.

Simply put, that 92 miles is a breeze, and a very nice one, as one can easily head north from here on the 101 and then take Highway 26 east for 70 beautiful miles over two coastal mountain ranges, down into the Willamette Valley, and then it’s on to Portland.

So, one can only imagine my excitement when I heard that later this month, the Oakland A’s will be making an official visit to Portland to talk about relocating the franchise to Rip City. The A’s are looking for a new place to play after MLB gave them the green light to consider relocating to another city.

Portland has been pursuing a baseball team for years. The Portland Diamond Project has some
preferred stadium sites, owns various ballpark renderings, and already has more than $2 billion
in financial commitments.

Oakland has been one of baseball’s stepchildren for some time now. The team has never drawn well, even when they’re winning, which is most of the time. The Giants and 49ers are the top drawing cards in the Bay Area, and even the NBA Warriors, once Oakland’s pride and joy, moved two years ago to The City.

The Oakland Coliseum, meanwhile, is an awful place to play or watch a game, and baseball officials say they need a new ballpark to stay competitive.

MLB says it doesn’t have any plans to expand right now, but if it did it would cost about 2.2 billion dollars to add teams. Portland is on the list of possible expansion cities along with Las Vegas, Montreal, Nashville and Vancouver B.C. So instead of adding a team to the league, maybe getting the A’s in Portland could be an option.

It appears that Portland and Las Vegas are the top contenders. In late May, the A’s dispatched a four-person travel party to Sin City, led by its owner John Fisher.

Now, it’s Portland’s turn at the plate. And it has a lot going for it, despite the fact that its downtown resembles a war zone, and is filled with towering heaps of garbage, not to mention a burgeoning homeless population.

If ever a city needed a shot in the arm, it is Portland.

Besides, who wants to play summertime baseball in Las Vegas, where temperatures easily hit 114 degrees? Plus, they already have the NHL’s Golden Knights and the NFL’s Raiders, and all other forms of entertainment offerings.

“In Oregon,” as the Oregonian’s much revered sports columnist John Canzano writes, “the A’s would be the summer headliner.”

He goes on: “MLB’s regular season works nicely in contrast to the Trail Blazers’ (October to April) NBA regular-season. Baseball isn’t likely to cannibalize the success of the Timbers or Thorns, either. There’s a finite amount of local corporate sponsorship dollars but we’re essentially the most underserved sports market in the country.

“It should be noted that there’s a difference between event ‘attendees’ in Las Vegas and ‘fans’ in Portland at play here. The A’s might draw a crowd in Vegas. But they’d get a fan base in Portland. I’m not sure the fact-finding visit will capture how much untapped enthusiasm there is in Oregon for another major league sport.

“Also, the potential TV rights contract for market No. 21 (PDX) would be stand to be more lucrative than No. 39 (LAS). Currently, six MLB clubs claim Las Vegas in their broadcast ‘territory’ rights. That will be a headache to unravel. Only the Seattle Mariners . . . currently claim Portland.”

Las Vegas is simply NOT the place for the A’s franchise. Portland is.

My note to the powers-to-be in MLB: Please let the A’s move down to Oregon! Don’t disappoint us in Manzanita. And remember, Ellis Conklin needs to at least near a Major League Baseball team, even if his allegiances will always be with the Giants.