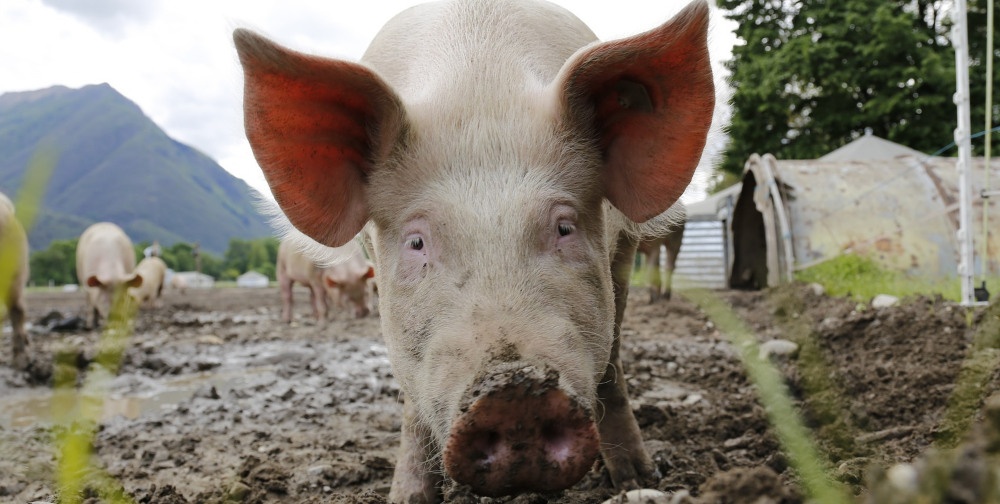 Heaped into a month of celebrations — Bastille Day, Flag Day, Juneteenth, and Father’s Day — is a significant anniversary, one that’s often forgotten. Yet, just around the corner, is June 15th — the 162nd anniversary of the starting incident of the Pig War, my favorite war (more about that later).

On that June day in 1859, Lyman Cutler, a US settler on San Juan Island, discovered a pig rooting in his potato patch. It wasn’t the first time livestock from the Hudson Bay Company sheep ranch had strayed into Cutler’s garden. This time Cutler got out his gun and shot the pig.

Later that day, Cutler had second thoughts. He went off to apologize to Charles Griffin, manager of the British company’s Belle Vue Farm. Cutler offered to pay him $10, an amount Cutler thought fair. Griffin countered, insisting on $100. Cutler refused and threatened to kill any other animals he found in his garden. Warming up, Cutler told Griffin he would as soon shoot him as he would a hog if he trespassed on his claim.

One thing led to another and, in no time, real hotheads got involved. U. S. General William S. Harney of the Department of Oregon, known for his dislike of the English, ordered his subordinate, Col. George Pickett, to leave Fort Bellingham and establish a base on San Juan Island. (Pickett later would lead a failed Confederate charge at Gettysburg.)

On his behalf, farm manager Griffin reported the pig-slaying incident to Vancouver Island Governor James Douglas, who also served as the Hudson Bay factor. Douglas was no fan of General Harney — a man that he said had spent a lifetime “warring against Indians.” Furthermore, Douglas was outraged over Whatcom County’s attempts to tax the company farm. He dispatched his son-in-law to check things out.

Underlying the dispute was confusion over whether San Juan Island belonged to the U. S. or to Great Britain. An earlier settlement had clouded ownership. Was the international borderline located along Haro Strait? Or was the line farther to the East at Rosario Strait?

The confrontation continued to escalate. Pickett arrived heading a group of 66 men and promptly set up camp on the island’s south end. Soon American troops were facing three armed British warships anchored off the west side of the island. Learning that Harney was planning to reinforce the American garrison with 450 men, Douglas ordered Capt. Geoffrey Hornby to land. But Hornby disobeyed. He was backed by British Rear Admiral Lambert Baynes who said he’d “rather shed tears than shed one drop of blood.”

Word of the dispute finally reached U. S. President James Buchanan, who, at the time, was distracted by precarious North-South tensions and anxious for “peace at any price.” Buchanan sent Gen. Winfield Scott (“old fuss and feathers”) to resolve matters. Scott, skilled as a peacemaker, gained the trust of Governor Douglas and was able to work out a joint occupation of San Juan Island until the issue of sovereignty could be settled. Hope was the disagreement could be resolved through arbitration.

But resolution was slow in coming. With the Civil War about to erupt and the Prussian War between Germany and France changing the power structure of Europe, the San Juan dispute languished for the next 13 years.

During those years, increased numbers of troops were garrisoned in two camps on the island, English Camp at Garrison Bay and the American camp occupying high ground near Cattle Point. Also arriving were camp followers from both sides. On the east side of the island, a new settlement known as San Juan Town flourished with liquor establishments and brothels.

Meanwhile, the two opposing forces faced one another almost amicably. The British and American commanders made a practice of declaring a truce at Christmas, an opportunity for feasting together. There were casualties in those years, but no hostilities. High on a hill above English Camp there is a cemetery with hand-hewn crosses. During the occupation, seven men succumbed to misadventures: drowning, accidents, and illness.

Rather than come to blows, the two nations submitted their claims to an international commission. And on March 5, 1871, the arbiters began discussion of three issues: Canadian fishing rights, unsolved Civil War claims, and the San Juan islands’ boundary. The first two issues were quickly settled and then, by a 2-1 vote, the Americans were given full claim to San Juan Island, strategically located at the entry to the Salish Sea. German Kaiser Wilhelm I, who oversaw the arbitration process, ratified the commission’s decision on October 21, 1872.

Although there was grumbling in London newspapers, the British public accepted the decision as a minor setback to a nation with a vast empire. Troops stationed at English Camp left in November following a friendly send-off. Remaining American troops departed in 1874. The difficulties were over; San Juan and its waters and nearby islands had been secured for the U.S.

Today the National Parks Service maintains both historic sites. At English Camp, U. S. rangers still raise and lower the Union Jack daily, one of the few places where U. S. government employees regularly hoist the flag of another country.

More importantly, the Pig War took an admirable place in world history. It signaled that there are ways nations can peacefully resolve competing claims. Bloodshed can be averted by compromise and arbitration. And so it is that the Pig War remains an altercation where the one and only casualty was a pig. It is my favorite war, the war that ended before it started.

Jean Godden
Jean Godden wrote columns first for the Seattle Post-Intelligencer and late for the Seattle Times. In 2002, she quit to run for City Council where she served for 12 years. Since then she published a book of city stories titled “Citizen Jean.” She is now co-host of The Bridge aired on community station KMGP at 101.1 FM. You can email tips and comments to Jean at jgodden@blarg.net.
Previous article
Italy: Rethinking Tourism before the Hordes Return?
Next article
Do it for Ellis: Pro Baseball Looks at a team for Portland