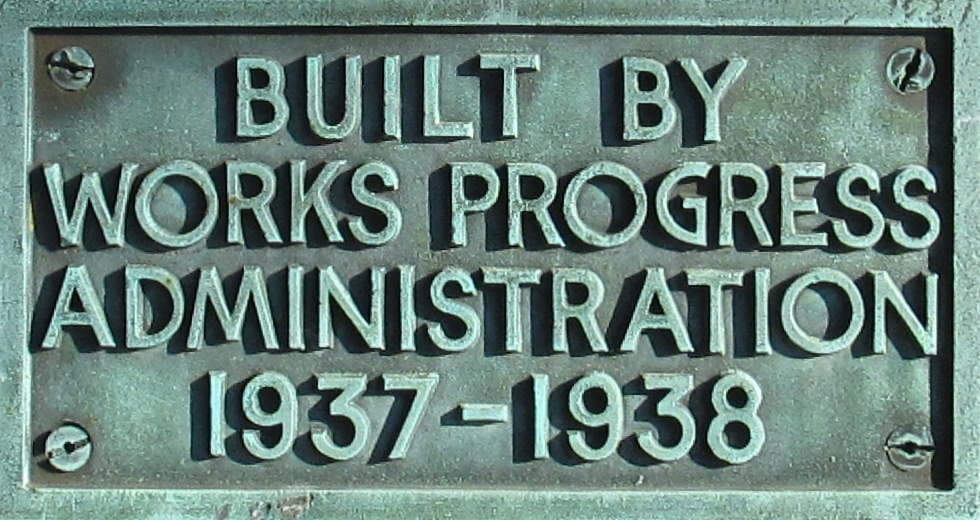 The most flamboyant and productive example of 1930s writers’ efforts, fueled by federal funds, emerged from Franklin Delano Roosevelt’s New Deal.  On March 4, 1933, the first day of FDR’s new administration, the president convened the cabinet and launched measures to halt a financial panic.  Three days later, 25 reporters filled the Oval Office to hear what else was up the president’s sleeve.  Within a week or so the first step in providing unemployment relief – the Civilian Conservation Corps (CCC) – was introduced.  Roosevelt’s closest friend, Harry Hopkins, was put in charge of the Works Projects Administration (WPA), out of which the Federal Writers Project was born.

The original mandate of the WPA was to build bridges and repair waterways and also to employ citizens in the fields of fine arts, music, theater, and writing.  Contributors to this immense undertaking included John Steinbeck, Richard Wright, Katherine Dunham, Frank Yerby, Saul Bellow, John Cheever, Studs Terkel, and Kenneth Rexroth.  Steinbeck would credit Federal Writers Project guides with helping him write his 1980 book, Travels with Charley in Search of America.

The State of Washington, with support from the Washington State Historical Society, produced the most fulsome (687 pages) national edition of a State Guide.  It remains today a definitive – although outdated – kaleidoscopic overview of virtually everything within the boundaries of our state and offers far more detail than the Federal Writers Project may have anticipated.

This doorstopper is called Washington: A Guide to the Evergreen State.  The introductory section summarizes Recreational Areas (in every county and wayside); City Histories (charming, detailed and personal), State Tours (still exciting to follow, although several routes have disappeared), a Calendar of Events (altered with new entertainments and special days), and maps and photographs galore.  The Guide’s green cover features a Haida Orca (Killer Whale) over the word “Washington.”

In the section called “Past and Present,” a general introduction to our Far Corner, the authors rhapsodize about the state’s 1930s-’40s railroad, highway, bus, air and water transportation.  Among the most charming sections are warnings to avoid rattlesnakes and wood ticks in the Eastern counties.  Likewise poison oak and poison ivy on both sides of the Cascades.  Another cautionary note suggests that visitors “be equipped with heavy leather boots or puttees and simple snake-bite (kits).”

To illustrate the style and detail of our forgotten state Guide, here are some samples of styles presented by the anonymous authors:

“The water front preserves the past of Seattle.  In its cafes, quaint murals, the work of sign painters of an earlier day, still adorn the walls.  Mirrors behind bars are encased in heavily carved wooden frames, and the shop signs of employment agencies and outfitters recall the heroic epoch of lumbering and the gold rush.  The harbor was the embryo of Seattle, and to this day the city derives its character from the wharves and its people.”

“The town of Walla Walla was founded at the end of the Indian wars of 1855-1858 (tensions caused in part by the violent deaths of the Whitmans and others at Waiilatpu in 1847).  On the spot where the city now stands, Governor Isaac I. Stevens, as superintendent of Indian Affairs, and Joel Palmer, superintendent of Indian Affairs for Oregon, held a great council, to which were invited Kamiakin and Ow-hi of the Yakima (now spelled “Yakama”), Peu-peu-mox-mox of the Walla Walla, a young chief of the Cayuse (likely Five Crows, Stickus or Howlish Wompoon), and Lawyer, Looking Glass, Joseph, and Timothy of the Nez Perce, and many others . . . Governor Stevens outlin(ed) the benefits of schools, stores, mills and supervised husbandry (agriculture) for the tribes accepting the reservations in the Yakima country and the Nez Perce country.”  (Agreements were only partially accepted by the Natives.  Resentment grew, resulting in battles and skirmishes for many years.)

Examples of Points of Interest in Walla Walla from the 1930s: Baker-Boyer National Bank (the oldest bank in the state of Washington), Whitman College (the oldest institution of higher learning in the state), St. Patrick’s Roman Catholic Church.

Partly to bait FDR, and as an expression of America’s traditional conservative voters, the Federal Writers Project was assailed by right-wing organizations in the 1930s-40s.  It was described by those sources as a beehive of communists and “fellow travelers.”  Congressional hearings were undertaken by the House Un-American Activities Committee (HUAC), chaired by Martin Dies, Jr. of Texas, a long-time opponent of the New Deal.  Witnesses were subject to “inquisitorial” tactics and could not examine evidence presented against them.  Several writers, artists, theater groups, labor unions and African American organizations were particular targets.  (Those tactics would re-emerge under Sen. Joseph R. McCarthy, especially when he assumed chairmanship of the Senate Committee on Government Operations in 1953.)

With the arrival of a more conservative Congress in 1939, the WPA budget was trimmed while HUAC funding was increased.  Federal sponsorship of the FWP dried up, but state, local, corporate and local history organizations stepped forward and published most of the state Guides and related projects.  Supporters of the FWP included Eleanor Roosevelt and well-known publishers such as Viking Press, Random House, and Alfred A. Knopf.

The Federal Writers’ Project provided over 10,000 jobs for Americans during the Depression.  Those workers found, recorded and revitalized much American history. In 2009, the Smithsonian Channel premiered a film about the FWP, with an accompanying book titled Soul of a People: The WPA Writers Project Uncovers Depression America.

Copies of the FWP state Guides, including “Washington: A Guide to the Evergreen State,” may be found in libraries, school archives, and serendipitous bookshop shelves. HathiTrust has digitized those incredible gems from America’s New Deal.

Junius Rochester
Junius Rochester, whose family has shaped the city for many generations, is an award-winning Northwest historian and author of numerous books about Seattle and other places.
Previous article
Lummi Carvers Send a Totem Pole to President Biden
Next article
Culture Change: Women Step up to Lead America’s Top Newsrooms