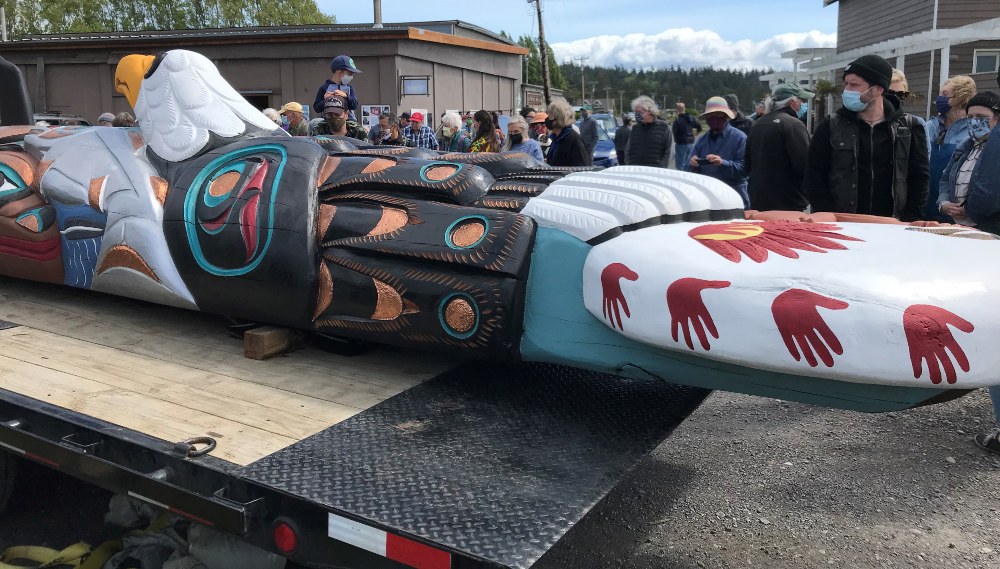 Later this month, wood carvers from the Lummi Nation will embark on a 7,000-mile-long journey transporting a spectacular 24-foot-long totem pole to the nation’s capital. They have plans to stop at important locations along the way. Their route (Red Route to D.C.) includes visits to such sacred sites as the Nez Perce tribal lands, Bears Ears National Monument in Utah, the Grand Canyon, Chaco Canyon in New Mexico, and South Dakota’s Black Hills. They’ll also pause at the Dakota Access Pipeline crossing of the Missouri River that thousands protested.

Head wood carver Jewel Praying Wolf James, his brother Douglas James, and Freddie Lane, their nephew and road manager, will lead the journey. They will be joined by other House of Tears carvers who helped with design, sanding, and painting, as well as family members, ranging in age from four to 70. The woodcarvers’ goal is to reach Washington, D.C. in early June. The totem is a gift from the Lummis — Lhoq’temish (people of the sea) — to President Joe Biden.  Carved from a 400-year-old red cedar tree, the totem will be displayed at the Smithsonian National Museum of the American Indian.

In preparation for the journey, the wood carvers first transported the giant totem, mounted atop a large flatbed trailer, on a grassroots tour of the Lummi Nation’s homeland. They visited some of the tribe’s traditional fishing sites on Orcas, Lopez, and San Juan islands. At each landing, they gathered to tell stories, explain totem figures, and conduct blessing and prayer ceremonies.

One of the carvers’ pre-journey stops was at Village Point on Lummi Island. The site overlooks Legoe Bay where Lummi fishing parties traditionally harvested sockeye salmon, a fish much esteemed by the tribe. The tribes’ fishing technique was unlike any other, with native fishers traveling by canoe and capturing spawning fish in specially constructed reef nets. The first catch of the sockeye season was greeted by tribal members with great ceremony.

At their visit to Village Point on May 8, the carvers told assembled island residents about the Lummi fishing traditions. Although reef netters still fish Legoe Bay, the tribe has recently refrained from fishing there. Freddie Land explained that the tribe was pausing out of concern for resident pods of Orcas that depend for sustenance on the much-reduced salmon runs.

Doug James and his wife Siam’elwit James greeted islanders, explaining how the House of Tears carvers had purchased the ancient red cedar, harvested from an old-growth forest. He said, “We began carving during the winter. There were no drawings to guide us. We were guided by inspiration and dreams.” James told interviewers that this totem is the culmination of 20 years of carving the iconic poles — an ancient form of story-telling. The carvers began practicing their craft in the aftermath of the 9/11 attack. They transported two totems, Freedom and Liberty, to the Pentagon in 2004 in memory of those who lost their lives in the terrorist attacks. The totems were meant to be a force for healing and unity.

Lummi totems carved in the past 20 years have worked to further causes such as the freeing of the captive whale Lolita (later renamed Tokitae) from the Miami Seaquarium, as well as to protest the proposed Cherry Point coal terminal that would have occupied ancestral lands.

This latest totem will illustrate the need to preserve native lands and raise awareness of threats to the environment and public health. The carvers believe it will arrive at an important moment in the nation’s political history. They specially applaud President Biden’s diverse cabinet and his selection of Secretary Deb Haaland, an enrolled member of the Laguna Pueblo, to head the Department of Interior.

James explained the colorful carvings on the Lummi totem all have significance. The red hands that adorn the top of the totem are to remind people of the missing and murdered indigenous women. James points to the carvings of Chinook salmon, sea bear, sea wolf, orca, diving eagle, and a child in jail, symbolic of the migrant children confined at the Southern border. Also featured are the seven tears that represent seven generations of trauma experienced during European colonialism.

Near the base of the totem one sees a grandmother figure passing along traditional skills to younger tribal members. The totem carvings conclude with the blue waters that encircle the Lummi’s homeland.

Doug James said that, after 20 year of practicing their craft, this totem will likely be their last. But the body of their work will continue to enlighten those who view the wood carvings, and people at each site along the Red Route to D. C. will be blessed by Lummi prayers.

Jean Godden
Jean Godden wrote columns first for the Seattle Post-Intelligencer and late for the Seattle Times. In 2002, she quit to run for City Council where she served for 12 years. Since then she published a book of city stories titled “Citizen Jean.” She is now co-host of The Bridge aired on community station KMGP at 101.1 FM. You can email tips and comments to Jean at jgodden@blarg.net.
Previous article
Warning Signs for Leftist Politics?
Next article
How FDR Defined Infrastructure: Roads, Bridges and Writers