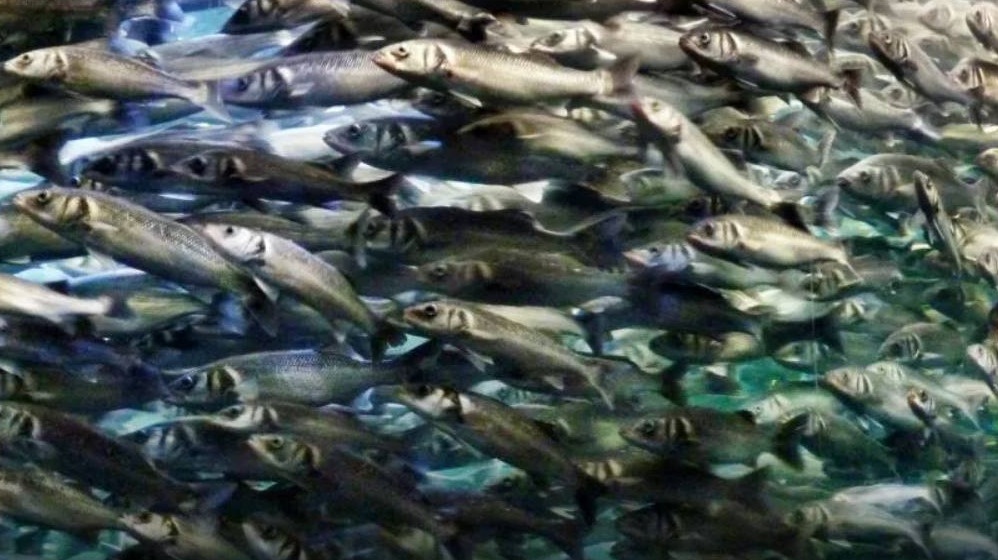 School’s Back in Session: Hundreds of Millions of Herring Return to Puget Sound

Spring on Puget Sound is about gardens bursting with tulips and daffodils, white sails set against glistening blue seas….  And massive, shimmering schools of silvery herring.

Schools of what?  In an ecosystem where whales and other charismatic mega-fauna get most of the attention, herring are neither charismatic nor mega.  At four to eight inches, they are easily ignored.  Except this time of year when millions upon millions of herring converge on the shallows Elliott Bay and Bainbridge to Hood Canal and Port Townsend..

Beachwalkers may not see the fish themselves, but they’ve marveled at the swarms of seabirds massed at the surface, and at seals, sea lions, and even humpback whales diving and cavorting as they gorge themselves on one of their favorite meals. All that activity is about Pacific herring, crucial to Puget Sound ecology.  And state biologists believe they have had a very good year.

Herring show up along Puget Sound shorelines for one reason – sex.  They spawn in the spring.  It may not be very intimate, but it’s hugely effective. Schools of fish form over the winter in deeper water until March or April, when they all decide it’s time.  The females move into the shallows, depositing tiny eggs on blades of eelgrass or kelp or any surface that looks right.  A single herring may deposit 10,000 eggs or more.  Meanwhile, the males spread their milt, clouding the waters so that the spawning activity becomes evident from the beach.

The numbers are so staggering that biologists don’t even try to count the fish.  They estimate herring spawning by the metric ton (2,200 pounds), and usually by hundreds or thousands of tons.  A good spawning year of 10,000 tons translates to at least 250 million fish and billions of eggs, the vast majority of which will be gobbled by birds or fish.

State biologists who track these things have watched drastic declines in bays like Quartermaster Harbor on Vashon Island in recent years.  But those declines have been offset by remarkable increases in Elliott Bay -– averaging 140 tons (perhaps 350,000 fish). Much of the activity takes place along Alki Beach and off the Olympic Sculpture Garden.   The estimates are even higher in Port Gamble, Quilcene Bay, and other corners of North Puget Sound.   “Quilcene has been crazy the last few years,” says Adam Lindquist, a forage fish biologist for the state Department of Fish and Wildlife.

Why are herring thriving?   Nobody knows for sure, Lindquist says.  There are too many variables, one of them being spawning habitat. Herring will deposit their eggs on a variety of shallow water surfaces, but they especially like eelgrass.  And there is ample eel grass habitat around Puget Sound, he says.  Predators are another major factor.  Salmon prey heavily on herring, but so do halibut, seals, gulls, diving birds, and virtually every creature larger than herring.

Whatever the reason, healthy herring runs may help explain why Puget Sound ecosystems appear to be improving, as reported recently by Lynda Mapes in The Seattle Times. The primary mission of all those forage fish is to be eaten by something else.  As go herring, so go all the wildlife that depend on them for food.

Herring runs have fluctuated wildly.  In the ’70s and early ’80s, Puget Sound herring estimates exceeded 20,000 tons – half a billion fish.  By the late ’90s, those estimates dropped below 10,000. Why? Commercial fishing may have been a factor.  For most of the last century, herring were netted mostly for bait, or ground up and processed into fertilizer. In the 1970s, however, commercial fishermen learned that herring roe are a prized Japanese delicacy – especially if it can be harvested on kelp leaves, or in the fish just before they spawn.   These resulted in lucrative fisheries through the 1980s and 1990s, but those fisheries declined as stocks diminished.

Now spawning runs may be rebounding, Lindquist reports.  Puget Sound stocks appear to have exceeded 10,000 tons – promising news for the salmon that feed on them, for the orcas and other mega-fauna that feed on salmon, and for the rest of us who yearn for a healthier Puget Sound.

A version of this article first appeared in Rainshadow Journal, based in Port Townsend.

Ross Andersonhttps://rainshadownorthwest.com/
Ross Anderson is a founding member of the Rainshadow Journal collective. He retired to Port Townsend after 30 years of journalism at the Seattle Times.
Previous article
Liz against the Big Lie — The Political Calculations (on both sides)
Next article
What the Civil War Looked Like in the Pacific Northwest