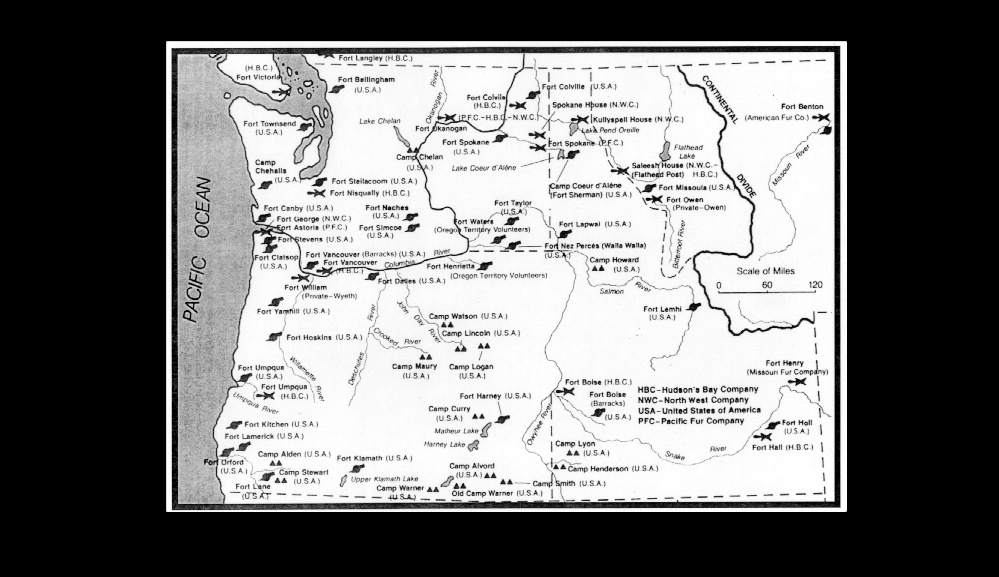 What the Civil War Looked Like in the Pacific Northwest

In the 1860s war clouds were on the horizon — even in distant Seattle and the Northwest — and some faint reminders linger today.

In 1861, Congress reacted to the secession of southern states by passing the Pacific Railroad Act, establishing fresh links to the West.  Soon thereafter, Secretary of State William H. Seward moved to protect the West Coast from “Dixie Raiders.”  Earthen batteries were hastily built at Fort Stevens on the Oregon side of the mouth of the Columbia River and can still be seen today.  Large guns were also installed at Cape Disappointment on the Washington shore.  For a look at this strange period, see Murray Morgan’s book, Confederate Raider in the North Pacific, 1864-1865: Saga of the C.S.S. Shenandoah.

Victoria, B.C. also entered the fray by hosting Canadian and American “copperheads,” northern supporters of the South.  This cross-border activity included rumors that an American cutter was about to be seized by Confederate sympathizers upon orders from Confederate President Jefferson Davis.  Several African American residents in Washington and Oregon volunteered services to British Columbia Gov. James Douglas.  An all-black Victoria Pioneer Rifle Company was sworn in and trained by Royal Navy drill sergeants.

Both the North and the South showed interest in the West.  Before Lincoln’s election, the Democratic Party held key political positions in the West, but Lincoln wasted no time in appointing Republican friends to those positions.  For example, John J. McGilvra, a colleague of Lincoln’s from Illinois (and future developer of Seattle’s Madison Park neighborhood) was appointed to the office of United States district attorney for the Territory of Washington.  Other Lincoln appointees to the Territory included Arthur A. Denny, Registrar of the Land Office, and Gov. William Pickering.

The West also served as a source of wealth for the Union cause.  Nevada’s silver mines, controlled by Union owners and workers, provided specie needed to purchase armaments and other equipment for Union armies.  Nevada’s “cooperation” also helped give it an early entry to statehood in 1864.

How did our local citizenry react to the building conflicts?  They were exhausted by the Indian Wars in the West. The initial Civil War battles were fought at remote Virginia crossroads, cow pastures, and strange Atlantic ports that seemed very far removed.

The winter of 1861 in the Pacific Northwest was unusually cold.  When Lincoln’s call came for a local regiment of infantry, Western settlers were indifferent.  In Walla Walla County an enrolling officer had a bucket of water thrown over his head.  Firecrackers were set off under the chair of another recruiter.

Nard Jones, author of the novel Swift Flows the River, took note of a movement called the Pacific Coast Republic.  In the fur trade days, Hudson Bay factor John McLoughlin mused about creating an elongated nation from Oregon to California (a later version was called “Cascadia”).  Following outbreak of the Civil War, this dream of a separate West Coast nation was revived.  Newly arrived Southerners were among the enthusiastic supporters of this secessionist idea for starting over with a clean slate.

To further confuse the picture, the Washington Territorial Legislature refused to declare its devotion to the Union, while nevertheless raising funds for the Union cause: $7,755.33 the first year.  Southern sympathizers may have indulged in minor acts of sabotage.

Some with Pacific Northwest connections who gained fame or notoriety in the American Civil War:

Isaac I. Stevens, first Territorial Governor – killed by a bullet through his temple at Chantilly; Gen. Philip H. Sheridan – fought in the Yakama Indian wars as a young lieutenant; Ulysses S. Grant – former quartermaster captain at Vancouver (WA) Barracks and later commander of the Union forces.

After the Civil War, Union and Confederate social and patriotic organizations were formed and they held ceremonies at Seattle’s Lake View Cemetery to honor those who fought for the South and the North.  (There’s a Grand Army of the Republic cemetery still maintained on north Capitol Hill.) In the 1920s the Ku Klux Klan reared its head with meetings and cross-burnings in Issaquah, Seattle, and Bellevue.  “Dixie Day” at the 1909 Alaska-Yukon-Pacific (AYP) Exposition attracted the largest attendance of any day at the fair.

Such reverberations belied Lincoln’s words in an 1862 message to Congress: “Our strife pertains to Ourselves – to the passing of generations of men; and it can without convulsion be hushed forever with the passing of one generation.”

Junius Rochester
Junius Rochester, whose family has shaped the city for many generations, is an award-winning Northwest historian and author of numerous books about Seattle and other places.
Previous article
School’s Back in Session: Hundreds of Millions of Herring Return to Puget Sound
Next article
Humiliation to Triumph: The Japanese-American Heroes of WWII