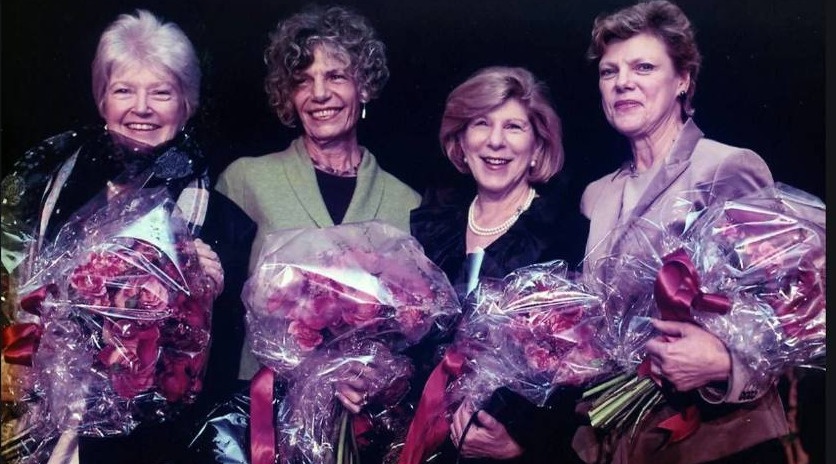 Almost everyone who has ever tuned into radio will recognize those four names, Susan, Linda, Nina, and Cokie. They serve as  the title for a remarkable group biography authored by Lisa Napoli and subtitled “The Extraordinary Story of the Founding Mothers of NPR.”

The book’s prologue pays tribute to the late Cokie Roberts, followed by individual stories of the women and their widely varied pathways to radio careers. Napoli first introduces Susan Stamberg, a new bride who in 1962 was desperately looking beyond her D.C. secretarial job. When Susan learned that WAMU-FM, part of an experiment called the Educational Radio Network, was looking for a producer, she asked a friend, “What does a producer do?”

Her friend said, “It’s someone who doesn’t take no for an answer.”

In those days, about the only place in broadcasting where a woman could land a paid job was at a noncommercial station like WAMU. This start-up was so new and precarious and the pay so low that, for once, male chauvinism didn’t prevail.

One day the WAMU weather girl called in sick and Susan subbed. As rare as it was for a woman to waltz into the role of producer, rarer still was it for a woman to appear on air, except in a sideline role. Stunned by her rare opportunity, Susan failed to check the weather service and when it came time to speak, she invented the temperature, barometer, and wind pressure. “It’s 92 degrees,” she announced. Never mind that it was February.

She’d learned two things: never go before a microphone without preparation, and speaking into the microphone was more compelling than working behind the scenes. Susan’s role in broadcasting soon expanded and she began working away on Kaleidoscope, (her alternative magazine show). National Public Radio meanwhile was preparing to launch All Things Considered, the 90-minute late-afternoon news show that debuted May 4, 1971. Incredibly the show is celebrating its fiftieth anniversary this coming Tuesday.

Susan was followed into public radio by Linda Wertheimer, daughter of New Mexico shopkeepers who fought her way into a Wellesley scholarship and onto an on-air spot. In 1975, they were joined by legal affairs correspondent Nina Totenberg who would later persuade Anita Hill to come forward alleging sexual harassment by Supreme Court nominee Clarence Thomas. Nina narrated the Senate hearings for PBS — hearings that became the impetus for women running for office and winning, making 1992 “the Year of the Woman.”

In 1978, these three women were joined by Cokie Roberts, who was born into a political dynasty and, as a child, had roamed the halls of Congress. Some women in the 1970s marched for equality or protested the lack of it. But Susan, Linda, Nina, and Cokie used their distinctive perches to elevate sex in another way — working many times harder than men while wielding microphones, as Susan described them, as “magic wands waved against silence.”

Because of the nature of their work and their keen focus on government, Susan, Linda, Nina, and Cokie forged a bond, occupying a cluster of desks situated near the front of the building. They subbed for one another when needed, they ran scoops past one another and they weighed in on hiring and union matters. A bemused male colleague christened the women and their corner of the office “the Fallopian jungle.”

One of the management issues the women faced in the early 1980s was the network’s national financial emergency. Frank Mankiewicz, who’d been brought in to lead National Public Radio, had greatly expanded the network, increased listenership, upped hiring, and added technology and expensive features. But he hadn’t kept up with the finances and a half-million-dollar shortfall was uncovered. Soon more losses became apparent, mounting into the millions.

Before the crisis was over, it was necessary to convince the Corporation for Public Broadcasting to bail out the radio service while managing the stress of the member stations.  During the financial crisis, Cokie and Linda scrambled around Congress rallying representatives to sign a petition expressing their commitment to NPR. Susan brimmed with ideas on how to save her beloved network, even soliciting advice from listeners.

The four founding mothers endured and the 1983 loan saved the network. It was one of the many professional and personal challenges the women weathered.

Napoli has written a riveting book, filled with personal anecdotes and glimpses of news being covered differently — with an eye to human values. The author researched and wrote during the pandemic year when libraries were shuttered and archives were hard to access. Difficulties aside, she has somehow managed to tell an important story, complete with electronic links to sources, including Speaker Nancy Pelosi’s 2019 funeral eulogy for Cokie. Reading Napoli’s book is the perfect way to celebrate 50 years of All Things Considered.

Jean Godden
Jean Godden wrote columns first for the Seattle Post-Intelligencer and late for the Seattle Times. In 2002, she quit to run for City Council where she served for 12 years. Since then she published a book of city stories titled “Citizen Jean.” She is now co-host of The Bridge aired on community station KMGP at 101.1 FM. You can email tips and comments to Jean at jgodden@blarg.net.
Previous article
How Bogus History was used to Save Whitman College
Next article
Citizen Science: “Will Anyone ever see this?”