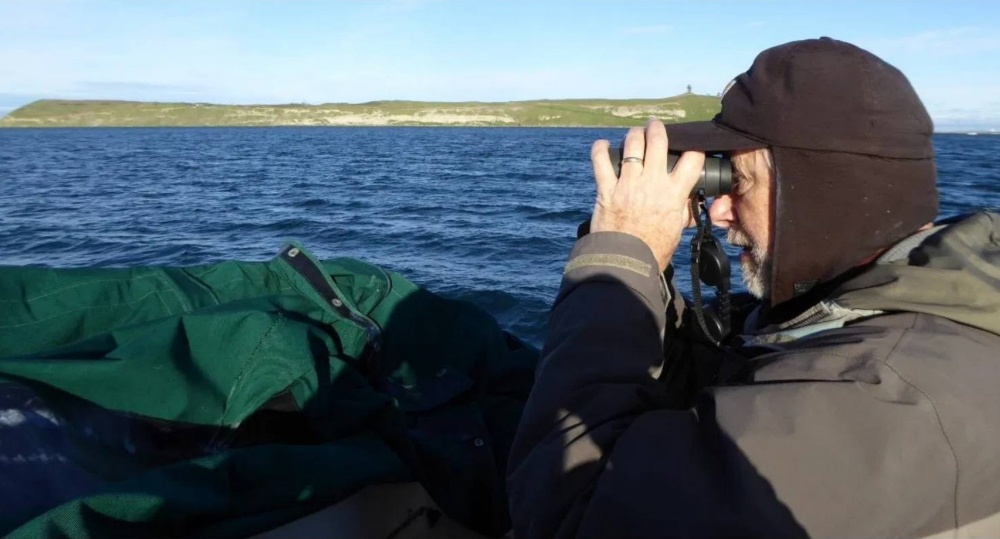 Citizen Science: “Will Anyone ever see this?”

If you’re asking yourself “So what?” that’s OK.   I ask myself that question frequently.  And I help count those birds.

Over the last four and a half years, my friends and I have spent more than 1,000 hours conducting monthly surveys around Protection Island, identifying and enumerating every seabird and marine mammal we see along our 25-mile course, and entering our findings into a database. Along the way, we’ve burned some 300 gallons of diesel fuel and slightly smaller amounts of black coffee and Pane d’Amore pastries.

This is not a profitable enterprise.  It’s citizen science, an ongoing project organized by Betsy Carlson at the Port Townsend Marine Science Center and Bob Boekelheide, a retired researcher and teacher.  They get help from a rotating group of amateur birders and naturalists. And me, a rumpled former newspaper reporter who knows little about birds but happens to own a small diesel trawler that lends itself to wildlife surveys.

Boekelheide is an affable fellow, an extraordinary spotter and the impetus behind the project. He’s a pure scientist who studied birds on the California coast for years, then spent more years as a science teacher before retiring to the Strait of Juan de Fuca shoreline.

So far, he says, we have amassed more than 15,000 records – each of which could be one bird or as many as 200 birds in a single recorded observation.  That data resides in computer memory banks in Boekelheide’s home office, at the science center and who-knows-where-else.

Citizen science, sometimes referred to as “community science,” is a big deal these days.   Researchers at the University of Washington recently estimated that 1.3 million citizen volunteers had participated in 388 research projects in just one area of research – biodiversity.   If undertaken by paid researchers, those efforts would cost $2.5 billion a year, the study concluded. Try getting that approved by Congress. The best-known example of citizen science is the annual Christmas bird count, when amateur birders around the world venture out to identify and count neighborhood birds.  Last year, 80,000 volunteers counted more than 6 million birds of 2600 species in North and South America alone.

Thanks to the internet, all that data finds its way into a variety of databases, including Cornell University’s world class ornithology program, says Jerry Freilich, Boekelheide’s friend who managed wildlife programs at Olympic National Park for many years.   While the information is collected by amateurs, it is processed and compiled with scientific rigor, Freilich says.

Our seabird-marine mammal surveys are based in the waters surrounding Protection Island, an area designated by the state Department of Natural Resources as an “aquatic reserve.”   Boekelheide served on a planning committee and decided it was time to assess wildlife populations in the reserve.

There was no specific issue, no burning ecological question to answer.  This was what scientists call a “baseline” study, which asks:  What birds are present in the reserve, how many, where, and at what times of year?  And how do those numbers vary year to year? The question is not controversial, not sexy, and certainly not newsworthy.  It is a simple matter of data collection.

So, beginning in the fall of 2016, we started counting – a five-hour monthly survey, year-round, following a star-shaped transect extending from Sequim Bay to McCurdy Point and out to the shipping lanes. Bob and Betsy and other volunteers do their counting from the upper deck of the boat, bundled against the cold.  I stay warm down below, steering and delivering regular reports on our speed, water depth, etc.

And sometimes, in my solitude, I find myself wondering if anybody will ever see or use the information. What’s the point? To me, it’s not a cynical question.  I’m well aware that, just 18 months ago, journalists like me might have asked: Why are scientists studying something as obscure as coronaviruses?    OK, now we know.

But the question reminds me that scientists process the world very differently from other people — and especially journalists like me.   We are all curious about things, but we ask different questions. Scientists ask: “What is this? How does it work? How many of them are there?” Journalists ask: “So what? Why does this matter? “

Scientists view the world via the scientific method, where truth is determined only by data derived from repeated experiments. It’s an orderly process that requires maximum precision and caution. Their findings are tentative and qualified; there is no such thing as a last word on anything.  Reporters tend to be less careful, less precise. Our observations mix science and politics and business.  We look for motivations, clues to why people do what. We are drawn to conflict among people or ideas, believing that truth can emerge from conflict — a concept that baffles most scientists.

Most important, journalists are communicators. We believe knowledge and ideas are valuable only to the extent they are communicated. To do that, we resort to storytelling and anecdotal evidence, techniques that sometimes fracture the scientific method.

Citizen science, however, crosses some of those boundaries by requiring scientists and nonscientists to work together. People like me need to understand how scientists think and work, and vice versa.   Experts like Bob Boekelheide and Jerry Freilich have learned that the world is far too big and complex to be left strictly to academic scientists.   There is too much nature, too much of everything for scientists to study by themselves.

“Citizen science is huge,” Boekelheide says. “Without volunteers, it would be impossible to collect the data we are gathering. It just wouldn’t happen.”

Those are just some of the reasons that National Parks, nonprofits like the Marine Science Center and even universities are learning to use amateurs to gather data.

“Citizen involvement is an excellent way to get people to care more about the world around them,” Freilich says.  “And birds are everywhere, an accessible indicator of the health of the environment.  This bird species is here this year, but then they’re gone the next year, and alarm bells go off.”

Left to amateurs like me, that data would be useless.  Generating accurate and relevant information requires collaboration between volunteers and professional scientists who know how to assess that information, how to crunch the numbers. And it requires systems like those computers at Cornell, where data can be stored for future reference.  At some point, 10 or 20 years from now, somebody will ask about seabird populations in the eastern straits.  And, hopefully, our data will give them something to work with.

So, next month, we’ll venture out again. Based on past surveys, we expect to see fewer common murres and rhinoceros auklets.  But there will be thousands of gulls nesting on the shores of the island, and bald eagles looking for an opportunity to feed on young chicks. And their numbers will be duly recorded by a motley crew of volunteer birders, and by a patient, rigorous scientist whose job it is to translate those passions into usable information.

Ross Andersonhttps://rainshadownorthwest.com/
Ross Anderson is a founding member of the Rainshadow Journal collective. He retired to Port Townsend after 30 years of journalism at the Seattle Times.
Previous article
National Public Radio @50: The Founding Mothers of NPR
Next article
In the Absence of Packaging… A social life emerges