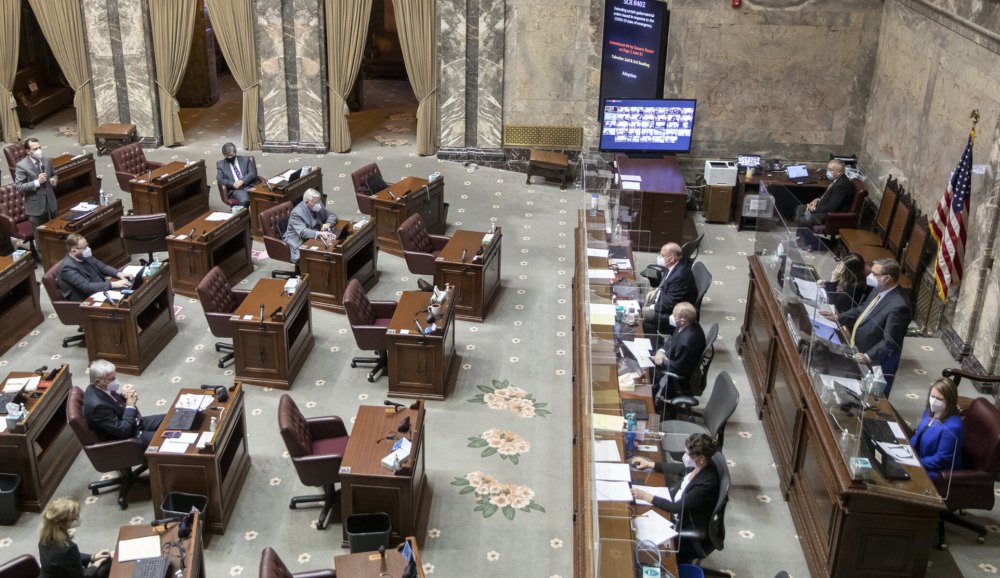 Gov. Jay Inslee and climate activists have enacted a landmark deal aimed at reducing carbon emissions in Washington. Proponents of overhauling the state’s tax system got a long-awaited tax on its wealthiest citizens and a long-delayed tax rebate for the poorest. Advocates for better early learning got a massive infusion of new spending on childcare and preschool. High-profile incidents of police violence helped spur passage of significant reforms.

Get the drift? The session of the Washington Legislature that ended Sunday goes in the books as one of the most momentous in decades. Inslee and majority Democrats achieved wins that had eluded them for years, leaving minority Republicans mostly shaking their heads over eye-popping price tags. The session was conducted largely virtually and in the context of a society suddenly altered by a pandemic that brought urgency to many issues.

“The pandemic exposed and exacerbated a lot of cracks that we have in our system, Senate Majority Leader Andy Billig, D-Spokane, observed. “We were able to move more quickly because of seeing the problems more clearly.”

The 105-day session was a lesson in elections having consequences, with a relatively subtle shift to the left in the Senate Democratic majority — achieved by massive political spending last year — adding up to a series of major wins for progressives. It’s also a lesson on the lubricating power of money. Resurgent state-tax revenue, a flood of federal dollars, and hundreds of millions expected from taxing capital gains (courts-willing) and exacting a price for carbon pollution helped push ideas across the finish line that had languished for years or decades.

Take, for example, Senate Transportation Committee Chairman Steve Hobbs’ pragmatic floor speech in support of Senate Bill 5126, the cap-and-trade bill aimed at reducing carbon emissions and other pollution by capping overall emissions and auctioning off the right to pollute under that cap. “This is $5.2 billion in support of transportation,” Hobbs said, referencing a broad deal to tie both that bill and House Bill 1091, the low-carbon fuel standard, to a future increase package of transportation spending, including a 5-cent increase in the gas tax. “It can be used for electrification of our ferries. That means I won’t have to use gas tax to do that.”

Together, those two bills made up the surviving elements of Inslee’s climate agenda. The low-carbon fuel standard — think mandates to blend more biofuels into gasoline and diesel, and a system of credits that encourages the adoption of electric vehicles — had passed the House only to die in Hobbs’ Senate committee in each of the past two years. It passed the Senate 26-23 this year over the objections of Republicans who argued that it would drive gas prices punitively higher, especially in combination with the cap-and-trade plan.

Inslee has been pushing variations of these policies — without much success — since he was first elected in 2012. Operatives and lawmakers involved in the passage of the climate proposals this year say that the package was on the brink of collapse at several points during the session. The difference this year: lots of money available to the lawmakers, so no need to cut into sacred cows.

Abundant money also made negotiations between the House and the Senate over the state’s operating budget unusually smooth. In a normal year, those negotiations are a none-too-genteel knife fight, with the two chambers wrangling over whose priorities get paid for out of a finite amount of money. This year, billions in flexible federal dollars from the pandemic relief packages — I like to call it Uncle Joe’s Pile of Cash (UJPOC) — allowed budget writers to mostly accommodate one another in writing a final budget that spends a record $59 billion in state money and more than $122 billion in all for the upcoming two-year cycle.

Some examples of the influence of UJPOC:

The ability to use all that federal money to patch the holes in Washington’s pandemic-tattered economy allowed lawmakers to direct the state’s tax resources elsewhere — most notably $261 million to pay for a beefed-up version of the working families tax rebate, a program lawmakers created way back in 2008. Until this year, they never put any actual money into it after revenue cratered during the Great Recession. Lawmakers also approved a sweeping increase in state spending on child care and preschool, initially paying for it with a mix of state and federal dollars. Both programs figure to cost the state hundreds of millions per year in the future.

Perhaps the most contentious debate in the closing hours of the session was over Senate Bill 5096, which would impose a 7 percent tax on capital gains from the sale of stocks, bonds, and other assets in excess of $250,000. With the working-families tax rebate, SB 5096 is intended as a start to overhauling a tax system that weighs heavily on the poor and lightly on the wealthy. At least initially, the new tax was sold as a way to pay for the tax break for the working poor and the early learning expansion. The House amended the measure to insert language that blocks a referendum campaign against the tax. In turn that could allow a legal challenge to play out — something progressives hope would lead to the Washington Supreme Court’s overturning the decades-old ruling that income taxes are unconstitutional.

Republicans, who despise the capital gains tax on principle as a policy that both punishes and discourages innovation and achievement, were particularly galled to see it pass in a year when the state was essentially awash in money. “We have no reason to create this new tax. The ultimate goal is to create the structure that will allow for an income tax,” said Sen. Lynda Wilson, R-Vancouver, the ranking minority member on the Senate Ways and Means Committee.

Democrats pointed out that the tax can still be challenged by an initiative campaign, which would be more expensive and difficult than a referendum. As the tax would extract hundreds of millions from a few thousand of Washington’s wealthiest citizens, such a campaign seems likely.

Most of the Legislature’s major actions now await Inslee’s signature. Absent a few surgical line-item vetoes, expect him to sign nearly all of them. After that, the major policy changes will enter a long rule-making phase. I will pay attention to this process, especially the climate bills, which will create lucrative new markets for pollution credits, carbon offsets, biofuels, and clean fuel credits. And another big story to follow: the end of the session means the resumption of political fundraising, which was frozen from mid-December until the gavels fell Sunday.

Paul Queary
Paul Queary, a veteran AP reporter and editor, is founder of The Washington Observer, an independent newsletter on politics, government and the influence thereof in Washington State.
Previous article
“Mask Bullies”: Kooky Alaska State Senator gets herself Banned from Airline
Next article
Oregon Gains a Congressional Seat (But Where?)