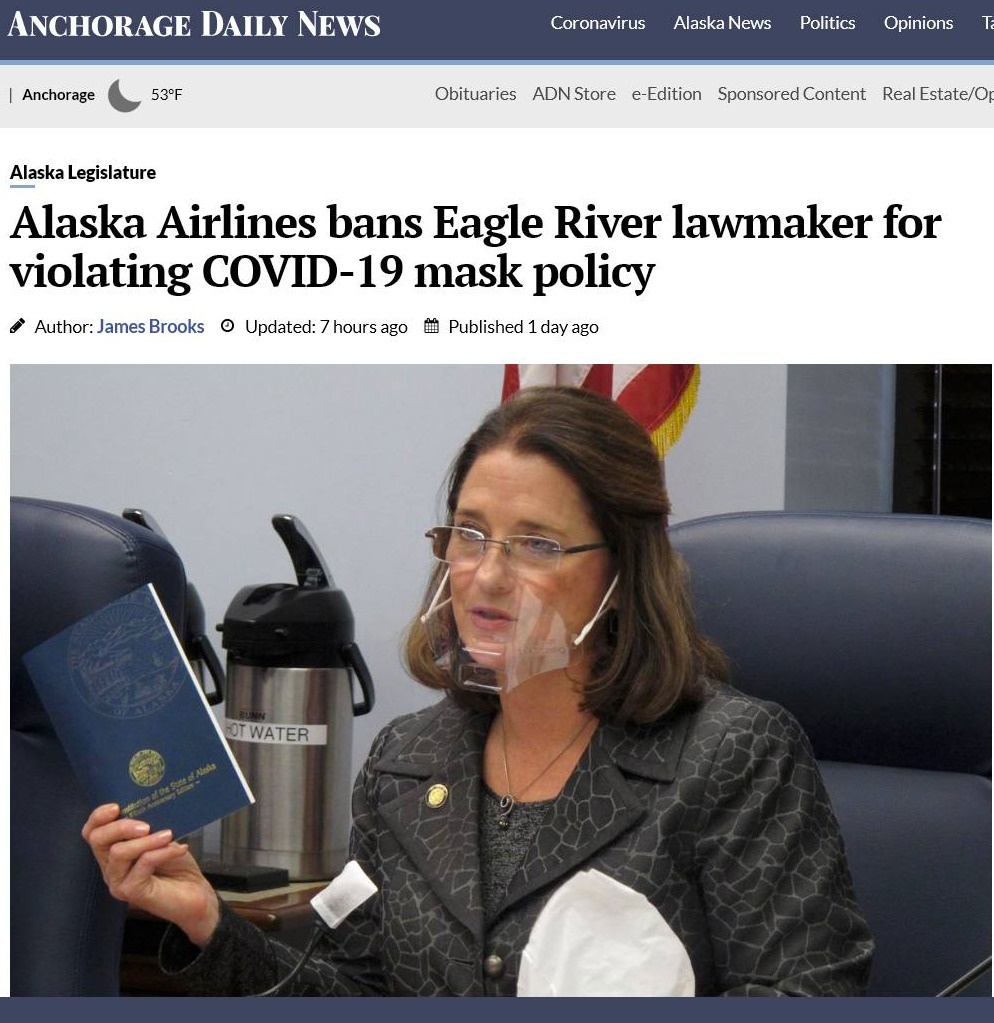 Juneau, Alaska, is the lone state capital in American that cannot be reached via road or rail.  Hence, it makes no sense to antagonize the lone commercial air carrier which serves Juneau International Airport, or to violate federal face-covering rules for air travel during the COVID-19 pandemic. Yet that’s what just happened.

Alaska State Sen. Lora Reinbold (R-Eagle River) has found herself banned by Alaska Airlines after an airport tussle over mask requirement.  A video posted to social media showed airline staff telling Reinbold her mask must cover her nose and mouth.  She called them “mask bullies.” An airline spokesman told the Anchorage Daily News: “We have notified Sen. Lora Reinbold that she is not permitted to fly with us for her continued refusal to comply with employee instruction regarding the current mask policy.”

In order to be on hand Monday, Reinbold had to drive from Eagle River (north of Anchorage) across Alaska, into the Yukon and south to Haines, where she could catch a ferry to Juneau.  She could Zoom into legislative hearings from home, but legislators must be present in the capitol to vote.  “Alaska: I went to new heights to serve you and have a new appreciation for the marine ferry system,” Reinbold posted.

The 49th State did embark in the 1970s on a bid to move the state capital, the proposed relocation championed by then-powerful Anchorage Times publisher Bob Atwood.  A commission studied various sites, including a hamlet named Bulchitna, which wags dubbed an ideal name for politicians.  Furious opposition from Southeast Alaska thwarted the move. Until the virus shut things down, a half-million cruise ship passengers mainly from the Lower 48 would disembark in Juneau each year.  But efforts by Alaska boomers to build a road link, which would go north to Skagway, have run into the obstacle of cost.

Lora Reinbold is one of the genuine zanies of the Alaska state Legislature.  As a House member, she was booted from the Republican majority caucus in 2015 after voting against its budget proposal.  Reinbold rebelled because the budget did not make deep enough spending cuts in the University of Alaska system. Reinbold has angered even (very) conservative Republican Gov. Mike Dunleavy with her strident criticism of COVID-19 mitigation measures. “It is lamentable that the good citizens of Eagle River and Chugiak are deprived of meaningful representation by the actions of the person holding the office of senator,” Dunleavy said in a recent statement.

She’s had a rough spring.  Reinbold walked out of a Senate subcommittee hearing when the chairman noted she was not wearing a mask.  She was escorted from a House hearing in March by Capitol security. She was removed as chair of the Senate Judiciary Committee earlier this month after disputes with fellow lawmakers and the legislature’s non-partisan professional staff. There will always be an Alaska!