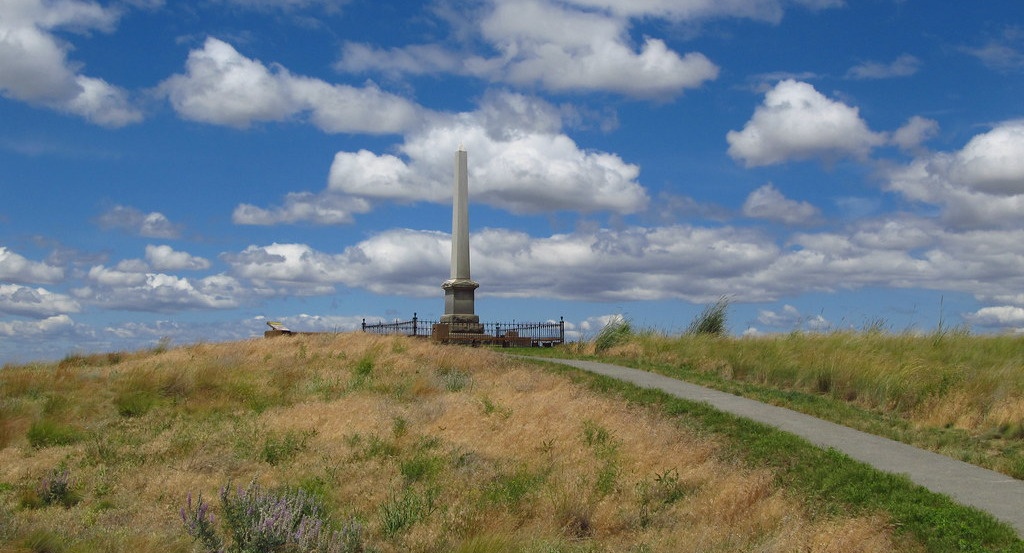 My Washington history course at Fairhaven Jr. High School in Bellingham featured a curriculum that must have been crafted by four bores and a bad fiction writer.  The lessons lionized “settlement” of the West by pioneers in covered wagons, depicted women sheltering children from “marauding” Indians, and inspired kids with tales of two martyred missionaries, Marcus and Narcissa Whitman.

Marcus Whitman was killed by tomahawk in 1847, at his mission just west of what’s now Walla Walla. He’s having a bad year in 2021.  The Washington Legislature has just voted to have a heroic statue of a Bible-toting Whitman removed from Statuary Hall at the U.S. Capitol, and replaced by modern-day Native American rights leader and environmentalist Billy Frank, Jr.

Murder at the Mission, by Seattle writer Blaine Harden (Viking, $30), traces and debunks a fabricated Whitman myth used to fuel Western expansion and to raise contributions to namesake Whitman College. It traces how Native Americans were cheated out of and pushed off ancestral lands.  But the book manages to end upbeat with the recent revival of decimated Indian tribes.  This story of anguish and loss leads to an improbable upbeat look to the future.

The Marcus Whitman I learned about at Fairhaven High was sent West to bring civilization to the savages and persuade nomadic native peoples to settle down as farmers.  In truth, his mission was to “sell” a severe Calvinism to Cayuse Indians, who found the faith of John Calvin to be, in Harden’s words, “useless, insulting, and – most of all – incomprehensible.” The natives also came to view the missionaries as “squatters on tribal land” whose behavior was “bossy, arrogant, and selfish.”

Embarrassingly unsuccessful when it came to baptizing converts, Whitman rode east in 1842 to save his own failing mission with an appeal to the Boston-based Board of Commission of Foreign Missions. He visited Washington, D.C., along the way and would return helping guide the largest-yet caravan of settlers to arrive on the Oregon Trail — exactly the influx that was alarming the Indians.

Marcus Whitman had come by a new mission, as described by Harden from a revealing letter: “He made it clear that he believed Indians were doomed and that his primary responsibility as a missionary was the white people replacing them.  ‘I have no doubt that our greatest work is to be to aid the White settlement of the country and help to found its religious institutions.’”

According to a Methodist parson who witnessed the mission, Narcissa Whitman was judged by the Indians to be “proud, haughty, as far above them.” As Harden notes, the 39-year-old Narcissa “was the only white woman killed by the Cayuses that day. She was not murdered my mistake. They spared all the other white women and all the children.”

The Cayuses were hard on their medicine men.  If one treated an ill tribe member and the person died, the medicine man was often killed.  Whitman was a doctor.  He and Narcissa were killed in the midst of a measles epidemic that had decimated the tribe. “Whitman was treating all its victims – Indian and white – with equal ineffectiveness,” writes Harden, “yet many of his white patients survived while most of his Indian patients did not.”

Myth and martyrdom go together, not just in story telling but to a political end.  An irascible fellow missionary, Henry Spalding, barely escaped being killed – thanks to an encounter with a Catholic priest — and conjured a story that spread east across the continent:  Marcus Whitman had saved America. Whitman had allegedly ridden east, five years before his death, to warn President Tyler that the British and papists (Catholics) had designs on Oregon Territory.  Spalding fashioned himself a “frontier celebrity” and “grieving friend,” and one who, as Harden writes, “could make headlines whenever he wanted, shape the country’s understanding of Oregon’s most infamous killing, invent a heroic persona for Marcus Whitman, and vilify the Catholic clergy as criminals who took their orders from Rome.”

The rest, as they say, was (bogus) history, at least for the remainder of the 19th century.  Five Cayuse men (one likely innocent) were brought to a farcical trial in Oregon and hanged.  The Whitman myth story was sold to wealthy church backers.  And the tragedy served to spur “settlement” of the West, at the expense of those tribes who already lived there.

Martyrdom became a stimulus to migration. “Nothing accelerated the settlement of the Pacific Northwest more than the killing of Marcus and Narcissa Whitman,” writes Harden. “Indeed, all across the West, a clear pattern would emerge in the wake of massacres of whites by Indians – especially if a white woman was among the victims: Racial hatred was inflamed, armies were launched, and Indians were pushed off their land.”

Not only that: the martyr myth was grasped in the summer of 1894 by the Rev. Stephen Penrose, who assumed the presidency of Whitman College at age 30, at a time when the faculty hadn’t been paid for months and just 40 students were enrolled for the fall. Penrose knew nothing of the Whitmans but seized on the myth to revive a dying college.  In a pamphlet called “The Romance of a College,” Penrose wrote:  “Why does that vast (Northwest) country belong now to the United States, and not to Great Britain?  Because Marcus Whitman was prophet enough to foresee its value, and hero enough to risk his life to save it.”

Penrose would peddle the myth for 40 years and raise money that was groundwork in building one of the finest liberal arts colleges of the West.  As late as the 1920s, he created an “outdoor extravaganza” – entitled How the West was Won – to mark the 75th anniversary of the Whitman Massacre.  “The script singled out ‘Doctor Whitman . . .  who saved this land of ours,” writes Harden.

The Whitman-saved-Oregon fable was exposed in 1900 by eminent Yale historian Edward Gaylord Bourne. It lived on, aided by Whitman’s eminent alumnus, U.S. Supreme Court Justice William O. Douglas.  “Wild Bill” supplied research materials for a hagiography in Life magazine, a September 1943 “Marcus Whitman and his famous ride,” described as an “epic journey which helped save the Oregon Territory for the U.S.”

In Harden’s view, however, Justice Douglas signaled that a reckoning was coming.  When he dedicated the Whitman statue at the U.S. Capitol, Douglas “dialed back Whitman’s historical importance” and said it was “probably too extravagant” to claim that the missionary saved Oregon.” Time, distance, and the “inexorable weight of evidence” caused Douglas to back off from a story in which he was steeped.

The Northwest is no equal to the South’s “Noble Cause” mythology used to refashion the Confederacy.  Three statues of Marcus Whitman – at the State Capitol, hidden in a faraway corner of the Whitman College campus, and soon to depart Statuary Hall – cannot compare to dozens of likenesses of Jefferson Davis and Robert E. Lee astride Traveler.

Yet, it has taken until recently for the lies and false images to be taken apart, and Blaine Harden has played his part. Harden grew up in Central Washington, where his father helped build the Grand Coulee Dam. Harden’s earlier book, A River Lost: The Life and Death of the Columbia (1996, Norton), details how remaking a great river for power and irrigation ruined its vast salmon fishery.  Others have written of the pains as well as gains endured by the region. The Apocalypse Factory (Norton 2020), by Steve Olson, details how the Hanford Reservation ended up with the nation’s highest volume of high-level radioactive waste.  Spirit of the Rock: The Fierce Battle for Modoc Homelands (WSU Press, 2017) by Jim Compton, details the grabbing of indigenous lands in southern Oregon, a reluctant Indian uprising, and the hangings that followed. Unsettled Ground (Sasquatch Books, 2020) by Cassandra Tate discusses the cultural chasm between the Whitmans and the Cayuse Indians.

Whitman College has walked back its founder. No longer are its athletes “the Missionaries”; they are now “The Blues,” named for the nearby Blue Mountains. A Walla Walla lawyer, Charles Luce, began winning settlements for residents of the Umatilla Indian Reservation and forcing irrigators to put water back in its namesake river.  Native American soldiers, returning from America’s wars, bucked up tribal leadership.

The Umatilla Reservation has found a measure of prosperity thanks to its Wildhorse Casino, and spent $18 million on a museum, the Tamistslikt Cultural Institute.  It’s part of a pattern:  From the Cherokees in the Great Smokies to the Makahs at Neah Bay, Native American tribes have built stunning museums to celebrate culture and set the historical record straight.

Interviewing Institute director Bobbie Conner, Harden asks if the reservation’s revival has made it possible for the Cayuse people to forgive and forget being demonized by whites as the savages who massacred Marcus and Narcissa Whitman.

“’No, she said emphatically, “the heartbreak is still there.”

Elliott Bay Books will mark the book’s publication by hosting a virtual event with Blaine Harden at 6 p.m. on Tuesday April 27.