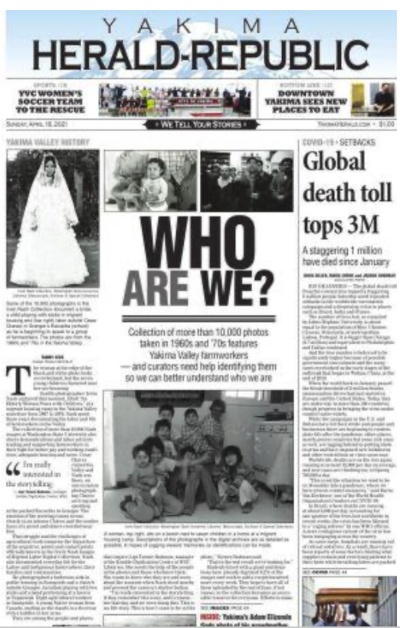 On Sunday, in a front page, above-the-fold feature package of two stories, the Yakima Herald followed my March Post Alley piece, “Her Name is Elisia.” That piece told the story of the improbably rediscovery of an undeservedly obscure collection of an estimated 9.300
photographs (revised downwards in the last month from an original estimate of 11,500 images) of farm workers in the Yakima Valley, taken between 1967 and 1976 by a Seattle photographer named Irwin Nash. Herald reporter Tammy Ayer’s in depth pieces can be read here and here,
and the first of her stories was picked up by the Seattle Times here.

The Nash Collection had been locked away in a sub-basement of the Washington State University Library since the early 1990s, with only about 100 low resolution images from the collection posted on the library’s website, until a Seattle couple posted a few of those images
on Facebook. This led to an emotional reaction from a Yakima man who recognized a 1972 photo of an anonymous woman boxing asparagus (originally identified in a brief photo caption only as “mother Elizondo”) as his grandmother.

His tribute to his grandmother, posted on social media, spurred a belated wave of interest in the largely forgotten collection from other relatives, farm workers’ rights activists, legislators, librarians, and others. This rich archive of photographs, covering a formative period in the struggle for farm worker rights – one farm worker leader from that era described the collection as capturing “the awakening of a people” – finally, 50 years after the fact, is generating interest and excitement, and beginning to get the attention it deserves.

The Nash Collection is currently in the process of being digitized and posted online, and once that is completed librarians there have ambitious dreams of launching an oral history project focused on the images in the collection. To do that right will take resources, however. It remains to be seen if the leadership at WSU understands the value of –- and potential level of interest in -– the Nash Collection. There’s a great opportunity here, if they seize it, to not only recover a fading history of largely invisible community, but to enhance the reputation and public image of the university as well.

You can read my original story here.

Sandeep Kaushik
Sandeep Kaushik is a political and public affairs consultant in Seattle. In a previous life, he was a staff writer and political columnist at the Stranger, and did a stint as a Washington State correspondent for Time Magazine and for the Boston Globe, back in the olden days when such positions still existed.
Previous article
Refreshing an Iconic Seattle Park in a New Context
Next article
More than a Guide Book, A Journey through Black History and a Call to Action