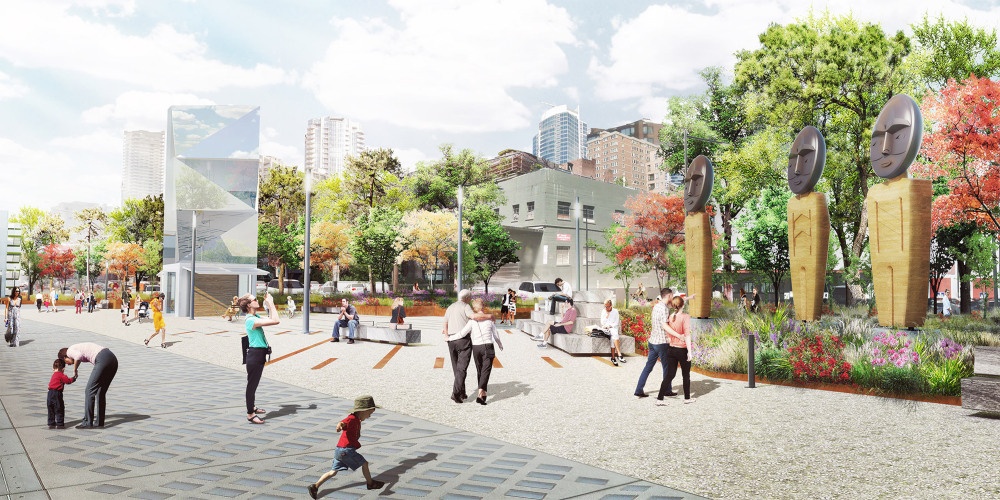 Refreshing an Iconic Seattle Park in a New Context

The MarketFront extension at Pike Place Market will eventually connect with the Overlook Walk the long ramp leading down to the waterfront. But from those MarketFront ramps and decks, the natural impulse will be to turn into Victor Steinbrueck Park. The park will be renewed and the decks connected in the future.  The line from one to the other is what’s known as a “desire line.”

But If you follow your eyes to the park you’ll be stopped by a low wall, a wall that thwarts the preferred walking route. So why? Why make what seems such an obvious design mistake? That’s the way of real-world design, with history, politics and conflicting agendas all exerting competing forces.

Projecting inward from the edge of the deck, the entrance to the park will say Welcome in Lushootseed and in English on the other side of an opening.  But that opening will also be marked by contrasting paving, creating a moment of doubt that it’s really safe or legal to cross.

The line is a boundary for a small urban sanctuary. It’s there to protect an informal section of the park in the southwest corner from foot traffic. That line in the pavement  will send a mixed message to pedestrians, but it’s a message the original designer of the park wanted us to hear.

Victor Steinbrueck Park, designed by landscape architect Richard Haag based on a dream of architect-activist Victor Steinbrueck, is actually built on top of a private parking garage. Located along Western Avenue, where Pike Place meets Virginia Street at its western edge facing Elliott Bay, the park attracts plenty of visitors, both tourists and locals, for its sweeping views of water and mountains.  It’s a hard-working park in a changing part of the city.

But it’s a mess.  Original built-in seating is crumbling, turf is worn away, benches are crowded, and sometimes trash is scattered on the paving. Presently, the entire western edge overlooking the bay is fenced off with tall chicken wire so that debris cannot be tossed down onto construction sites where workers below are building a new surface street, Elliott Way, and a bridging walkway across it.

Luckily, there is funding to fix the park before the aging deck fails, according to David Graves of Seattle Parks & Recreation. The heavily used 1970’s park will be updated with a design by Walker Macy, which got key approvals in 2019. The project is now in the permit phase.

The plan hits all the high notes: better lighting with less glare, seating replaced to accommodate different users. Best of all, the parking-lot deck that supports it all will be fixed, with paving and plantings replaced.  The new tree will be large but young, and the lawns less hilly. It’s all meant to be more welcoming, easier to maintain and safer.  Native heritage will be represented with new metalwork wrapped around pergola columns and laid upon the paved surface, echoing Native themes in the public art below on the redeveloped waterfront.  Much of the expense of the project is in the structural repair and not the visible elements. All the plantings and surface features must be removed so that the decking can be restored—and then replaced.

Steinbrueck and Haag both placed a high priority on providing amenities for poor and displaced people.  Over the years, the park has been heavily used, to say the least, by groups fitting that description. The southwest corner has been favored by Native people.

The late Richard Haag assured me in 2016 that the barrier to the MarketFront must remain because otherwise visitors would turn that protected part of the park into a thoroughfare. Maybe Haag and friends were honoring an old promise to the Duwamish  Seattle that his people would get a dedicated patch of land inside the city after he signed it away in a fateful treaty.

If so, it’s ironic that the park is not on land at all. Instead, it’s on a roof deck over a private parking garage dedicated to waterfront parking. But the old deck must be repaired by the owner of the park, the city of Seattle. The repairs are an excuse for the park makeover.

Design lead Walker Macy, mindful of the sensitivity involved in many decisions, consulted with Johnpaul Jones, who practices with Seattle’s Jones & Jones.  He is credited with the design of the Smithsonian’s National Museum of the American Indian and also the first Seattle housing project dedicated to Native people, now in construction in Pioneer Square.

There will be new Salish-themed metalwork in Steinbrueck Park, with a Native inspired map integrated with the new paving, according to Walker Macy’s Lara Rose. The “welcome” wall and text was a compromise found with the help of Jones. A matching wall and signage will go with the street entrance to the park, from Western Avenue.

When Victor Steinbrueck Park was designed and built there were no plans to take down the old viaduct, nor thoughts of connecting the market with the waterfront. Steinbrueck Park, built in the context of one Seattle, will now be repurposed to fit into a different Seattle. It’s anybody’s guess whether the Native community that gathered in the southwest corner of the park before the chicken wire went up will return there. Pedestrians trying to enter the park around the low wall will not have a clue why that wall, and the lines in the paving, are impeding them. But the wall won’t forget.

This is the way things get done. It may not be great functional design. It might not even make sense in the new context in which the park sits. But physical spaces are also places of history, and of memory. Sometimes they also get a voice.