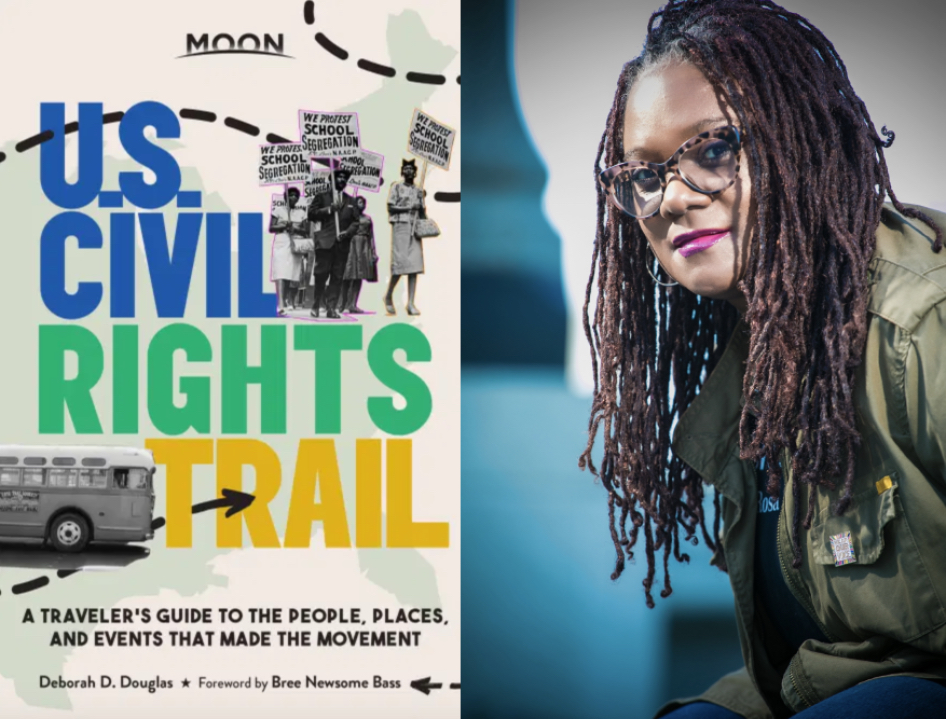 More than a Guide Book, A Journey through Black History and a Call to Action

She was a Montgomery, Alabama, cook and midwife who organized a secret kitchen to feed and fund the civil rights movement, cooking meals for people like Martin Luther King Jr. and Ralph Abernathy. She also headlined a class-action lawsuit against the city challenging segregation in public parks.

Or do you remember Aurelia Browder? She was the lead plaintiff in a lawsuit challenging segregated buses after she and four other women were arrested for refusing to give up their seats to White passengers.

These are two of the many unsung heroes of the civil rights movement who get the long overdue acclaim in “U.S. Civil Rights Trail, A Traveler’s Guide to the People, Places, and Events that Made the Movement” (Moon Travel Guides 2021) by Deborah D. Douglas.

This is not a typical guide book and is worth a read whether you are planning a trip to the South or prefer to be an armchair traveler. As she takes you from city to city along the U.S. Civil Rights Trail, Douglas offers readers a journey through history that most of us were never taught in school, and she connects the dots from those battles a half century ago to #BlackLivesMatter and the ongoing struggle for equity.

As she writes in her preface:

“This book bears witness to the atrocities that occurred when everyday people took risks to pursue justice and equity. It also celebrates triumph over adversity, as well as the contributions African Americans have made to American culture.”

As opposed to a history book that might follow a chronological timeline, “U.S. Civil Rights Trail” adapts the standard format of travel guides to tell its story. It starts in Charleston (South Carolina) and follows the civil rights movement from there to Atlanta and on to Selma, Montgomery, Birmingham (Alabama), Jackson (Mississippi), The Delta, Little Rock (Arkansas), Memphis and Nashville (Tennessee), Greensboro and Raleigh (North Carolina), Richmond and Farmville (Virginia) and ends in Washington, D.C.

“Exploring the civil rights trail is a way of linking our lived experience to a time when Black Americans became united, committed and stronger,” writes Douglas.

The book’s itinerary is based on the official U.S. Civil Rights Trail, and for each location, presents a two-day guide including sights, tours and local guides, shopping, food, accommodations, transportation and maps – all the practical information expected of a travel guide.

Each location also features a “Movement Timeline” of key events that occurred there and a “People Who Made the Movement” list with thumbnails on individuals and groups central to the struggle in that place. The events and many of the individuals are covered in more detail in the narratives for each section.

But the book is no dry retelling of events. There is passion and anger and praise in how Douglas writes, and she doesn’t hesitate to note where efforts to preserve history fall short.

For example, in the section on Charleston: “It’s worth noting that a great deal of the historical narrative downtown, in the area near the Charleston Visitor Center, prioritizes antebellum culture and the “romanticism” of plantation culture. Fortunately, more folks are working on becoming more reliable and inclusive narrators in the evolving conversation about race and place… In Charleston, that means abandoning a romanticized version of a city that celebrates a colonial past and a thriving plantation economy, and understanding that the city we know today was built on the lives and legacy of enslaved Black people.”

Douglas, an award-winning journalist and the Eugene S. Pulliam Distinguished Visiting Professor of Journalism at DePauw University, regularly links the struggles of the past with those of today. For example, when describing the bloody voter registration battles of the 1960s, she notes: “While poll taxes and literacy tests are a relic of the past, voter suppression is not.”

In describing museums and historic sites, Douglas highlights the kinds of objects and displays they feature like Woolworth’s lunch counters where sit-ins were once held, signs for segregated facilities, a jar of jelly beans to illustrate a “test” used to keep Black citizens from registering to vote, batons used to beat civil rights demonstrators. She notes that the displays at the Mississippi Civil Rights Museum “don’t mince words about the terror of living in the Jim Crow South.” Neither does Douglas.

In writing about the National Memorial for Peace and Justice in Montgomery, Douglas describes how it represents the era of lynching terror 1877-1950. “The memorial is comprised of 800 suspended corten steel monuments, which accounts for each county in the United States where racially motivated lynchings occurred. Victims’ names – several thousand – are engraved on each column.”

To immerse herself in the horrors of Jim Crow cannot have been easy for the author. I’m talking with her this Thursday April 22 for a program presented by Folio Seattle and hope she’ll talk about what it was like for her personally traveling the U.S. Civil Rights Trail and bearing witness. (You can sign up to Zoom in here).

Douglas also brings humor and delight to sections of the book where she shares how to get a great Southern meal prepared by church women, and where you can shop and find treasures in Black-owned stores, and where you can find the music that has made so many of these cities famous.

This is a book that can been read on many levels –- as a practical guide for a trip, as an opportunity to learn about Black heroes who have been omitted from most history books, as a call to action to continue the fight. The book ends with a list of organizations and Twitter handles for readers seeking to get more engaged and a list of Black-owned businesses you can support by shopping online.

In the book, Bernard Lafayette, a leader in the struggle, is asked what someone gains from visiting the places where the civil rights movement took place.

“When people say, why is this happening? Why did that happen? You got to have the background,” he replies. “Why are people still behaving the way they behave?

“That’s one of the things that people must understand when they go to museums and that sort of thing. It’s not that you want to preserve that behavior, but you want to understand the history and where it came from.”

And if you can’t visit in person, take an armchair journey with “U.S. Civil Rights Trail.”

Linda Kramer Jenning
Linda Kramer Jenning is an independent journalist who moved to Bainbridge Island after several decades reporting from Washington, D.C. She taught journalism at Georgetown University and is former Washington editor of Glamour.
Previous article
Nash Collection Farm Worker Photos Get Front Page Treatment
Next article
Why We Should Stop Calling it the Salish Sea