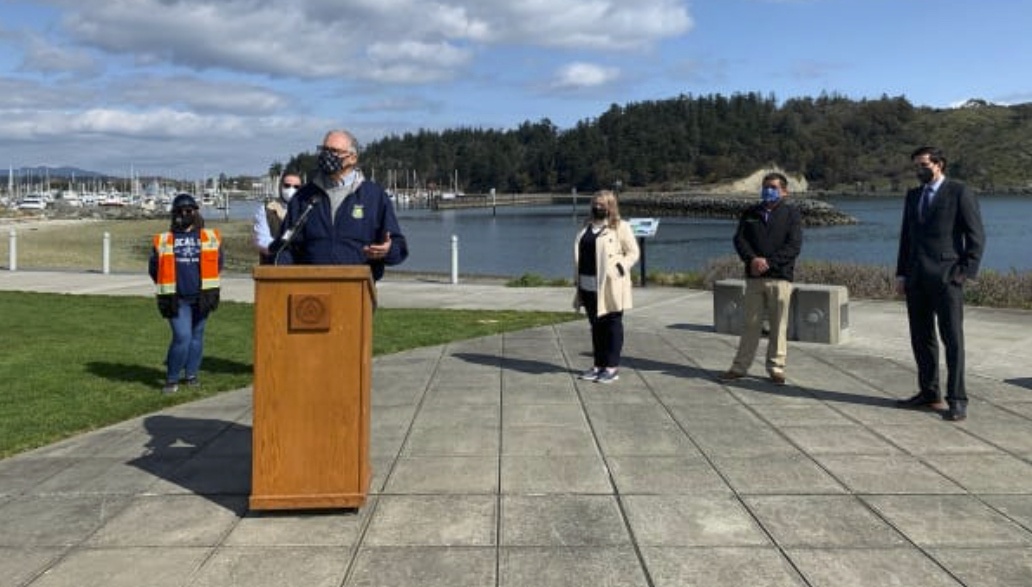 A Day in Governor Inslee’s Schedule

Here at the Washington Observer, we make a habit of requesting Gov. Jay Inslee’s calendar on a weekly basis under the Public Disclosure Act. Reading through it is never a waste of time. Attentive readers will recall a few good tidbits in past stories. But we hadn’t yet seen a day as top-to-bottom newsy as March 29. Here’s a spin through it, with some context and a few illuminating and not-so-illuminating explanations from Inslee’s office.

At 8:30 a.m., Inslee received the second half of a 90-minute sexual harassment prevention training, something Faulk told us is required of managers in state government. When asked whether this requirement — or Inslee’s participation in it — was prompted by the pungent dumpster fire smoldering in the office of New York Gov. Andrew Cuomo, Inslee press secretary Mike Faulk kinda ducked.

“This fulfills our requirement that managers complete sexual harassment training every few years,” Faulk said in an email responding to several questions about the calendar.

At 11:30 a.m., Inslee met virtually with the White House COVID 19 coordinator and other governors from western states about “communications challenges around vaccine information we are seeing between states and the federal government.”

That actually turned out to be about the feds sending vaccine directly into Washington via the Veterans Administration, communities clinics, and pharmacies without giving the state much of a heads-up, complicating planning for state and local health officials.

“If they had this information in advance, it would inform their strategy to see if they could send more doses to areas that are not currently benefitting from these additional federal resources,” Faulk wrote.

That same day, 14 other states announced they were opening vaccinations up to everyone over 16, prompting a bunch of why-not-us coverage in Washington State. Two days later, Inslee announced vaccination would be opened to all Washingtonians on April 15, two weeks earlier than planned.

At 1:30 p.m., Inslee met with Sen. Reuven Carlyle, chair of the Senate Environment, Energy, & Technology Committee, who had been shepherding the bulk of Inslee’s climate legislation along a narrow and rocky path through the Senate. Carlyle, D-Seattle, was dealing not only with his own Senate Bill 5126, the much-massaged cap-and-trade bill, but also with House Bill 1091, the low-carbon fuel standard. Both measures narrowly passed the Senate on Thursday evening.

Faulk told us that meeting, along with a separate call with Senate Majority Leader Andy Billig at 5 p.m., was part of the preparation for the trip Inslee took to Skagit County the following morning. The centerpiece of that trip was a press event in Anacortes, home to two major oil refineries, at which Inslee urged lawmakers to pass SB 5126 and HB 1091.

“The governor wanted to talk to legislative leaders before he went and did a public event about pending legislation,” Falk wrote.

It’s completely reasonable that Inslee would want to check in with Carlyle and Billig on the health and well-being of those bills. What’s more interesting is who he didn’t check in with ahead of that trip: Sen. Liz Lovelett, D-Anacortes, the vice-chair of Carlyle’s committee. It’s typical for members of Democratic members of the Legislature to appear with Inslee when he visits their districts. For example, that’s Rep. Alex Ramel, who represents Anacortes in the House, at right in the picture above.

Lovelett, who has pointedly declined to support the cap-and-trade bill, is the sponsor of the competing Washington STRONG plan, which calls for a more broadly applied tax on carbon. A faction of environmentalists opposes cap-and-trade under the argument that its market-based approach lets polluters essentially buy the right to keep polluting.

Lovelett was also notably absent from the Anacortes event itself, although Faulk told us she was invited. Lovelett didn’t respond when we reached out about the event. As we’ve reported, the politics of carbon-reduction politics are dicey, especially for someone who represents hundreds of refinery workers. She voted no on the cap-and-trade bill on Thursday, but yes on the low-carbon fuel standard.

At 2 p.m., Inslee turned his attention to tribal relations, getting a staff briefing on former Gov. Chris Gregoire’s executive order 05-05 from November 2005. That order lays out the process by which state agencies must review projects to avoid unnecessary damage to historically significant sites, structures, and buildings.

The order followed a spectacularly embarrassing and expensive tribal-relations debacle in the early 2000s, when the Department of Transportation was forced to abandon construction of a massive drydock at Port Angeles for building floating bridge pontoons. Construction workers found what a cursory archeological review had missed: building the dock would desecrate the graves of hundreds of ancestors of the Lower Elwha Klallam Tribe

Faulk told us the administration is “hoping to update the current executive order on this to streamline and clarify procedures.”

Among changes under consideration, Faulk said, is giving the governor’s Office of Financial Management the final say if two state agencies disagree about whether potential impacts have been sufficiently avoided, minimized, or mitigated.

The theme of tribal relations continued at 5:30 p.m. when Inslee met with tribal leaders on the climate bills, again in preparation for the Anacortes event.

Steve Edwards, the chair of the Swinomish Indian Tribal Community, appeared with Inslee in Anacortes. The tribe is a longtime ally of Inslee on environmental issues, and a sometime antagonist of the refineries, which are close to the northern end of its reservation. Mile-long oil trains routinely roll across an aging bridge over the Swinomish Channel and past the tribe’s casino on their way to the Marathon Oil refinery just to the west.

One interesting bit of context for this last meeting of Inslee’s interesting day is the tribe’s claim to March’s Point, the peninsula that currently holds the Marathon refinery as well as Shell’s Puget Sound Refinery. The point was within the boundaries of the reservation on the maps associated with the Treaty of Point Elliott in 1855 but later withdrawn by President Ulysses S. Grant. The tribe’s pretty firmly on the record as wanting it back.

Paul Queary
Paul Queary, a veteran AP reporter and editor, is founder of The Washington Observer, an independent newsletter on politics, government and the influence thereof in Washington State.
Previous article
The Chamber of Commerce Disarms Itself Politically. Sorta.
Next article
Finally: Bringing Factions Together to Solve Seattle’s Housing Problem?