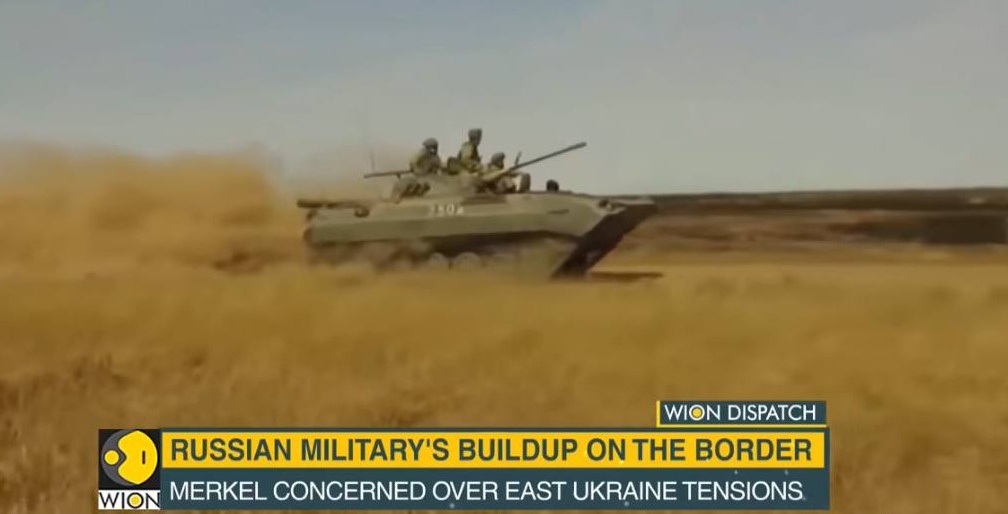 Russian President Vladimir Putin has mastered the art of distraction throughout his 21 years as Kremlin leader. By provoking conflicts with former Soviet republics on the pretext of protecting their Russian minorities and recovering lost territory, he has pumped up Russian nationalist pride in times of economic and political troubles.

Putin’s latest revving of the war machine, a massive deployment of Russian military force to Ukraine’s borders, comes at a time of overlapping domestic woes, from declining living standards and a failed pandemic response to intensified political opposition and new tensions with the United States and Europe.

The ex-KGB agent has slithered out of political peril in the past with swift strikes against weaker neighbors and rebellious republics within Russia. But the swarm of troops, armor and warships around Ukraine’s land and sea borders has alarmed Western leaders and drawn threats of new sanctions that would compound the hardships suffered by Russians amid the Covid-19 crises and spreading political unrest. By marshaling forces for what looks like a looming invasion of Ukraine, whether executed or not, Putin may be adding to his crises rather than distracting from them.

Kremlin officials and parliamentary leaders have incited fears of an imminent invasion with fiery rhetoric about apocalyptic consequences for Ukraine if it moves to retake two provinces occupied by Russia-backed separatists since 2014.

Dmitri Peskov, Putin’s spokesman, warned at a Kremlin briefing Friday that “in case of a potential repetition of a human catastrophe similar to Srebrenica,” Russia, as would all states, take action to prevent that tragedy from being repeated. The Bosnian village was the site of a 1995 massacre of 8,000 Muslim men and boys by Serbian nationalist fighters.

“The start of military action would mean the beginning of Ukraine’s end,” Dmitri Kozak, the Kremlin’s chief negotiator with Kyiv on issues of the separatist-held territory, said in warning Ukrainian President Volodymyr Zelensky against appealing for help from NATO. Zelensky told NATO Secretary General Jens Stoltenberg last week that membership in the Western defense alliance was the only way for Ukraine to recover its occupied territory, where 14,000 fighters and civilians have been killed over seven years of on and off armed conflict.

U.S. and European officials scrambled in recent days to warn Russia against further military intimidation of Ukraine. A European-brokered cease-fire in the occupied territory in the Don River basin last July has deteriorated over the past month, prompting Kremlin officials to claim the Russian citizens and Russian speakers in the separatist regions are at risk of annihilation by Ukrainian troops armed by Western allies. Ukraine also continues to press for return of Crimea, seized and annexed by Russia in March 2014, days before the separatist takeover began of Donetsk and Luhansk provinces on Ukraine’s eastern border with Russia.

In a call last week with German Chancellor Angela Merkel, Putin blamed the rising tensions on “provocative actions by Kyiv,” according to the Kremlin readout of the conversation. Peskov on Sunday denied in a Russian television interview that Merkel urged Moscow to stand down from the Ukrainian borders. The media readout by Merkel’s government said she “demanded that this buildup be unwound in order to de-escalate the situation.”

Secretary of State Antony Blinken added Washington’s voice to the chorus of European leaders’ alarm over the ominous presence of Russian forces on Ukraine’s borders, where a Moscow-based group that monitors Russian security movements estimates 85,000 Russian troops are now stationed.

“I have real concerns about Russia’s actions on the border with Ukraine,” Blinken told NBC on Sunday. “There are more Russian forces there on that border than any time since 2014.”

He said U.S. diplomats were working closely with European allies in efforts to avert another conflict. Two U.S. warships have been deployed to the Black Sea, expected to arrive later this week. Russia’s Defense Ministry announced it is moving 10 naval vessels from the Caspian Sea to Ukraine’s Black Sea coast for “exercises.” The vast sea surrounds the Crimean peninsula and has been the scene of provocative warplane buzzings and close-encounter confrontations between U.S. and Russian forces.

What, if anything, the United States can do to defuse the long-simmering hostilities between Russia and Ukraine is unclear. Since the election defeat of the Kremlin-friendly Trump administration, Putin has been faced with a more critical U.S. government over its abuse of political opponents and a rash of poisonings of Kremlin critics abroad.

President Joe Biden answered in the affirmative in a CBS interview last month when asked if he believed Putin is “a killer,” based on the fatal poisonings of opponents living in Britain and the assassination of rivals at home, like the gunning down of charismatic opposition leader Boris Nemtsov steps from the Kremlin in 2015.

Biden’s State Department has been outspoken about the harsh treatment of opposition leader Alexei Navalny, who was poisoned by a banned chemical weapon last summer and has been imprisoned and on hunger strike since his return to Russia after convalescing from the poisoning at a German hospital. The jailing of Navalny sparked weeks of mass protests across Russia that have been silenced, for now, by brutal beatings and the arrests of thousands.

In the more confrontational atmosphere of U.S.-Russia relations now, the Kremlin is unlikely to take Western advice and stand down from the face-off with Ukraine. Peskov told a Kremlin briefing Friday that Russia’s military deployments on its sovereign territory were of no concern to foreign states. The recent buildup has included moving an air assault brigade into Crimea, which the United States and the European Union regard as illegally annexed Ukrainian territory, not part of Russia.

Most analysts of Putin’s bellicose behavior doubt he intends a massive invasion, given the potential for a more deadly and prolonged conflict with Ukraine than was necessary to conquer territory in the Georgia in 2008 or from Moldova in what remains a frozen conflict. But some note the potential for unintended consequences with so much firepower assembled between hostile nations.

“The ostentation with which the troops are being moved confirms that Russia is saber-rattling rather than contemplating a blitzkrieg,” Maxim Samorukov of the Moscow Carnegie Center think tank wrote in an analysis last week. “Still, the absence of rational motives for a war does not preclude the crisis spiraling out of control accidentally. The tense atmosphere and casualties suffered by both sides increase the possibility that a misstep or rogue action at a local level could drag the two countries into a new military confrontation.”

Carol J Williams
Carol J. Williams is a retired foreign correspondent with 30 years' reporting abroad for the Los Angeles Times and Associated Press. She has reported from more than 80 countries, with a focus on USSR/Russia and Eastern Europe.
Previous article
Holy Florida Congressman, Batman!
Next article
Jumping Legal Hurdles for the City’s “Jump Start Tax”