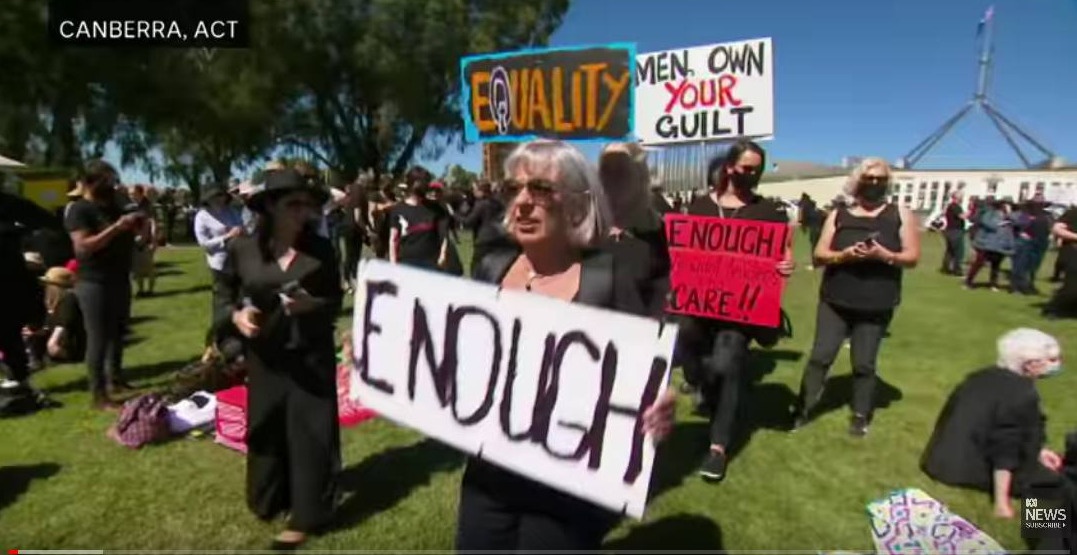 Six weeks after allegations of sexual assaults at the highest offices of the Australian government, Prime Minister Scott Morrison gave his Cabinet a little shake.

He demoted his attorney general and defense minister at the center of separate rape scandals that have shocked the nation into a belated #TimesUp mobilization of women’s mounting rage. Morrison also piled new responsibilities for taking care of his “women’s problems” on the few female ministers already in top government posts. Then he moved a few more ladies up the ladder a notch and merged them into a new Cabinet-adjacent taskforce he will co-chair with Women’s Minister Marise Payne, already juggling the side hustle of foreign minister.

One catalyst for Morrison’s shuffling some of his conservative administration’s top figures was the report by Defense Ministry staffer Brittany Higgins in late February that she had been raped in Parliament House two years earlier by a more senior colleague. Defense Minister Linda Reynolds, demoted to the post of Minister of Government Services by Morrison on Monday, had responded to Higgins’ accusations by calling her a “lying cow.”

Days after the Defense Ministry’s dismissive treatment of Higgins, Attorney General Christian Porter was identified as the accused rapist in a letter sent to the prime minister’s office in February, a report Morrison concedes he never read. The letter sent by friends of the alleged victim, who was 16 at the time she said she was raped in 1988, called for investigation of the assault reported to New South Wales police in February 2020 by the accuser who committed suicide four months later. Porter denies the rape accusation and he and other officials of Morrison’s (oddly named) Liberal Party dismiss the need for investigation because the alleged victim is dead.

The coinciding scandals spurred massive March 4 Women protests that drew 110,000 into the streets of dozens of cities under the banner of “Enough is Enough.”

“My story was on the front page for the sole reason that it was a painful reminder to women that if it can happen in Parliament House, it can truly happen anywhere,” Higgins told protesters in the capital, Canberra, denouncing the “horrible societal acceptance” of sexual violence in Australia.

The escalating demands for an end to Australia’s culture of misogyny have elevated issues of job discrimination, sexual assault and harassment, bullying of high school girls into sexual liaisons then shaming them for acquiescing. Sociologists and women’s rights groups trace the entrenched sexism to the country’s main political parties — Liberals and Labor — whose youth and campus organizations have become breeding grounds for future generations of misogynist politicians.

In a commentary in early March headlined “Australian Politics Is A Toxic Boys Club,” University of Melbourne academic Kate Clayton argued that politicians from the leading parties are indoctrinated early in the ways of domination. The University of Melbourne Liberal Club has excluded women from attending events, shared Facebook posts calling women “sluts” and stated that all feminists are ugly, Clayton wrote.

Sexism in the halls of government long preceded the recent scandals. Women have been abandoning the Liberal party in droves for years. Former Foreign Minister Julie Bishop accused a cabal of male colleagues of trying to derail her career a decade ago. After Morrison’s half-measures in the midst of a national outcry, Bishop denounced her former political allies as “a group with such disgusting machismo they called themselves the Big Swinging Dicks.”

Investigative reporting by the Australian Broadcasting Company amid the latest scandals alleged that Liberal staff members in Parliament House have masturbated on desks of female MPs. A Queensland lawmaker from Morrison’s party is accused of stalking two women online and in person for years – one a charity worker who says she was suicidal over his harassment, the other a teacher who reported him to police for photographing her while he hid in bushes.

In an opinion piece for the Sydney Morning Herald, political and international editor Peter Hartcher accused Morrison of bungling the response to sexual assault and misogyny reports “at every turn.”

“Even voters who are unconcerned about the underlying problems of justice for women will be impressed by the sheer political incompetence on display day after day, week after week.” Hartcher wrote his commentary two days before Monday’s Cabinet shuffle, predicting exactly the token tweaks to the leadership the prime minister made.

Morrison congratulated himself for promoting Payne, the current hybrid women’s affairs minister and head of international diplomacy, to “the Prime Minister for Women.” That set off Twitter musings on whether the need for women to have a separate leader spotlighted the government’s neglect of the female half of the country thus far.

The media focus of the past two months on entrenched sexism has dredged up evidence of historic abuse of power against women.

Chanel Contos, a 22-year-old Sydney-area woman, stirred an awakening about the attitudes of young men, especially those who attended elite private all-boys schools, that they were entitled to sexual engagements with young women.

The original Instagram poll Contos initiated in February elicited more than 3,000 testimonials from girls and young women in the Sydney area about being forced into unwanted sexual relations and “slut-shamed” into keeping quiet about it. Of the first 300 who responded, 72% said they or someone close to them had been sexually assaulted. More than 30,000 have signed Contos’s petition to have high school curricula include education on the importance of consent before intimacy, collected on the teachusconsent.com website.

Carol J Williams
Carol J. Williams is a retired foreign correspondent with 30 years' reporting abroad for the Los Angeles Times and Associated Press. She has reported from more than 80 countries, with a focus on USSR/Russia and Eastern Europe.
Previous article
Women Who Have Shaped Our Region: Let Me Add to the List
Next article
Post-Trump: The China Problem Spurs Bipartisanship