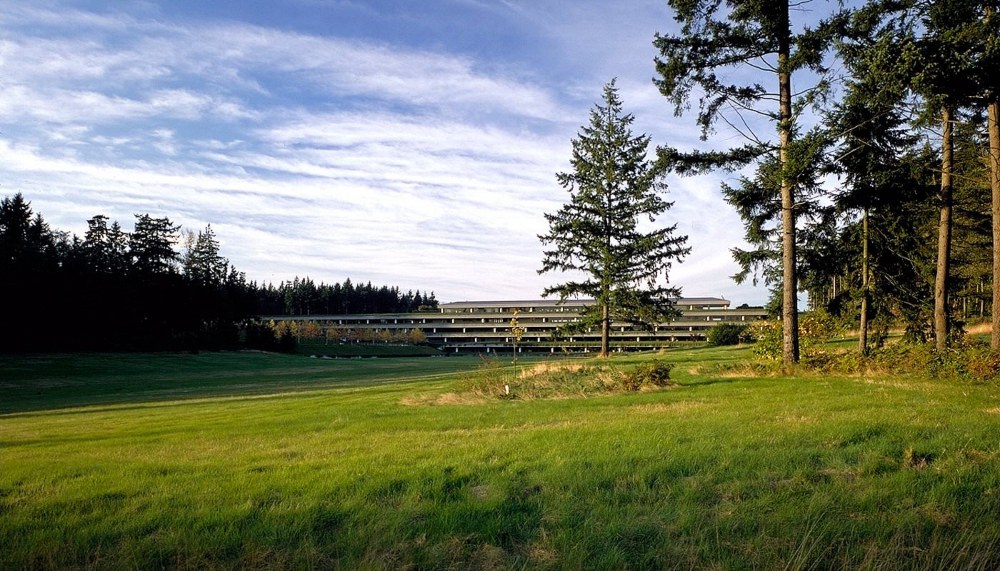 Can Weyerhaeuser’s Iconic HQ be Saved and Repurposed?

The last time I visited the landmark Weyerhaeuser headquarters building in Federal Way was four years ago, not long after the company’s main office had moved to its new Pioneer Square location and sold off its admired corporate home. Already, the celebrated old five-level structure was showing signs of deterioration. Once a building is abandoned, it doesn’t take long for the lack of maintenance to take its toll.

The formerly lush plantings that cascaded down in a sort of Hanging Gardens of Babylon effect were brown and spotty. The windows were covered with scratches and grime. The concrete superstructure actually looked moldy. It had been gutted of all its sleek, contemporary interior finishes and furnishings; only bare walls and columns remained. It felt more like a creepy, closed-up parking garage than its previous internationally-known incarnation.

This was originally a building built both of its time and before its time. The move of the company’s headquarters out of downtown Tacoma matched what was going on all over the country in the early ‘60s as corporations decamped for more verdant suburban locations (and where, coincidentally, the chief executives lived.) So this grand structure is a symbol of the urban dissolution of that era.

But it was also a forward-thinking design. When those other corporations were throwing up generic glass and steel blocks surrounded by asphalt, this one did something quite different. It blended the building with the landscape, in an effect obviously influenced by the concepts of pre-eminent designers like architect Frank Lloyd Wright and landscape architect Ian McHarg. The use of water as a foil to pose the structure was also brilliant, like Wright’s Fallingwater translated to the world of commerce.

Now it’s used up. Finished. Forgotten. Tossed onto the dustbin of architectural history. Sold to developers who will likely turn the campus into a field of warehouses.

But should this be its fate? Some people apparently think not and are working feverishly to see if it can be saved and restored.  Here are some relevant historic notes about this admired campus, drawn from a recent New York Times story:

“The campus, designed by the architect Edward Charles Bassett and the landscape architect Peter Walker, featured a low-slung building in a meadow between wooded hillsides. Ivy-covered terraces on the front of the building cascaded down to a lake, and walking paths wound through trees. Members of the public were allowed onto the campus, which became a popular spot for kite-flying, dog-walking and birding.”

While most of the old Weyerhaeuser campus in Federal Way could well be demolished and replaced with pedestrian commercial uses, this building could instead be re-purposed and acquire a new life. Many older generations of buildings have been revived with new uses and new management. This one also deserves the same future. By happenstance I recently saw a scenario that could be a possible prospect. Two years ago, before the onset of the pandemic, we visited a fascinating place in Zalec, Slovenia. The complex, 45 minutes east of the capital city of Ljubljana, is a center of experimental agronomy and hops research. Like the University of Washington’s Center for Urban Horticulture, it serves a multitude of functions.

There is a research section with greenhouses for growing different types of edible and non-edible plants. We purchased some cuttings and starts to see how they would fare in our own garden. There is an education section, which holds classes in plants and gardening. It has ties to nearby colleges, borrowing instructors and researchers. It contains an interpretive center, presenting the history and practice of the region.  There is a café, where one can taste local dishes. The grounds are green and pleasant and conducive to strolling and picnicking. There is no big architectural statement, but the central structure nonetheless conveys dignity and gravitas in the continuing evolution of the agrarian region within which it is located.

One could easily imagine the former timber company headquarter re-purposed to something similar. It could represent the role of forestry practices, with its impact on development, building technology, and forms of housing. Collateral stories could be told about animal habitats, product lines like tissue and toilet paper, and the importance of tree canopy in urban areas. There are so many subjects that could be displayed. Moreover, a section could be devoted to research, with connections to the UW Center for Urban Horticulture and WSU’s Extension Service. Weyerhaeuser itself could have a section devoted to its colorful history.

No one institution or entity would need to singularly carry the load. Nearby colleges like Highline, Green River, Evergreen, and Tacoma could contribute to its life, as could the expanding UW Tacoma. Perhaps part of its new purpose would be a training center for people who formerly worked in resource harvesting to acquire skills in resource sustainability. The possibilities seem almost endless. Attention: Gov. Inslee!

What the Pacific Northwest does not need is another monument to the past, another museum of static exhibits. This iconic structure could still make a vital contribution to the economy and the culture of the region.

Mark Hinshaw
Mark Hinshaw is a retired architect and city planner who lived in Seattle for more than 40 years. For 12 years he had a regular column on architecture for The Seattle Times and later was a frequent contributor to Crosscut. He now lives in a small hill town in Italy.
Previous article
Master of Illusion: Seattle’s New Electrical Substation goes Online
Next article
Can a Conservative Idaho Republican Bring Sockeyes Back to the Salmon River?