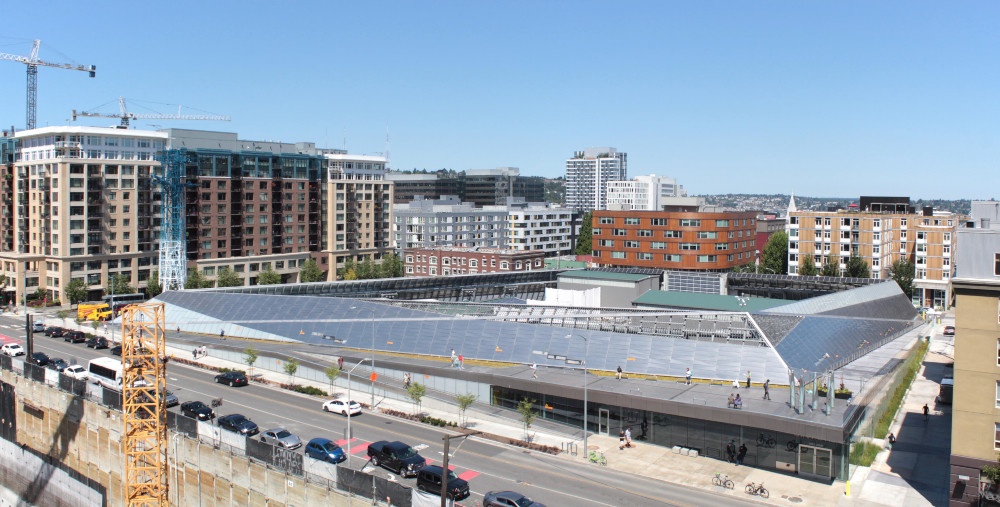 It might come as a surprise that the best downtown architecture from the latest building boom is not a tower or mixed-use building.  It’s an electrical substation utility.

Denny Substation stands to accommodate demand from the crush of new buildings, especially in the Denny Triangle and in the South Lake Union-Cascadia neighborhoods just off Denny Way, where new towers are still topping out.  The core essential equipment of a substation is no one’s idea of beautiful. But that doesn’t mean that you can’t transform its public face into something striking. Thus the electrical substation itself is buffered by a giant metal abstraction that acts like a landform. It covers an entire city block that does not rise much above four stories.

The buffering also includes public amenities: a sculpture park, an art space and a dog run. The structure’s signage is shaped and integrated into the building. From the sidewalk, glass doors and tall windows announce community meeting rooms and museum-like galleries, all part of the project. A generous art budget has funded a wealth of sculpture (such as Lead Pencil Studio’s 10-story-high “Transforest”). These peripherals together successfully mask the major piece of electrical infrastructure inside.

The NBBJ architectural team, whose offices are just to the north, was not the first to think of hiding the wires of an urban substation and directing the curious to viewpoints, but they have designed a dramatic way to view it — long walkways in the steel walls that allow visitors to peer inside.  Inside, there is no tech future on display — just boring huts with large outside switch boxes. The open-air interior is not inhabited for obvious safety reasons.

The steel shell itself is an artwork, with riveted, inward-slanting walls that fade to small louvers in the upper panels. Nearby mixed-use towers that were under construction before the pandemic are now topping out, and residents will gaze down on a changing picture inside the sculptural frame.

Substations receive bulk electricity from a regional grid and break it down into bite-sized voltages for local consumption. The Denny Substation, the first one built in 30 years by Seattle City Light, anticipates and serves growth in South Lake Union. Such facilities are not wanted by the neighborhoods, fearing electromagnetic waves.

That’s why much of the electrical plant at Denny Substation is located underground. Above-ground elements are inside those rows of windowless buildings in the middle of the block, looking like wartime housing.  It’s hard to plan around the inductors, capacitors, switch gears, and transformers that send electricity for all those computers. All of this is easier to fit in industrial zones, but that’s not where the new electrical supply is needed. Scarce urban land had to be found, and the call for mitigation was heard.

The result is ingenious and well worth the mounting list of design awards and breathless reviews.  The NBBJ design team, headed by principal Jose Sama, needed to wall off the substation while offering up favors—all within a single project budget.  NBBJ is an international architecture firm founded in Seattle’s Pioneer Square in 1943 and headquartered in the middle of the Cascadia neighborhood, a block from the Denny Substation. The company designs corporate buildings for tech firms, including Amazon. This month, NBBJ showed a rendering of “Amazon HQ2,” set for Arlington, Virginia. The firm designed the 2018 Amazon Spheres in the Denny Triangle.

The city had upzoned land inside the Denny Triangle when the substation site, a contaminated Greyhound bus lot, was acquired in 2012. As construction began, the program was loaded with neighborhood amenities to satisfy nearby “stakeholders.” By 2019 the actual cost of the project was nearly double the original budget, according to Crosscut. The neighborhood critics most focused on the project were seniors in the Mirabella retirement complex just west. Now those seniors walk their dogs to the artificial turf of the new off-leash area there. The small park is carefully designed around the only older building which now shares the block, the red brick Brewster Apartments.

According to Seattle City Light spokesperson Julie Moore, the substation “was designed to last 50-100 years with the capacity to accommodate future needs. It provides immediate and lasting flexibility to our regional grid by allowing us to shift and balance loads from adjacent systems.” Along with these practical advantages, the substation gives a lot back to the neighborhood.

Clair Enlow
Clair Enlow is a freelance journalist writing about architecture, planning and history. She’s a Loeb Fellow and an honorary member of AIASeattle.
Previous article
An Idea for Empty Hotel Rooms: Private Room-Service Cafes
Next article
Can Weyerhaeuser’s Iconic HQ be Saved and Repurposed?