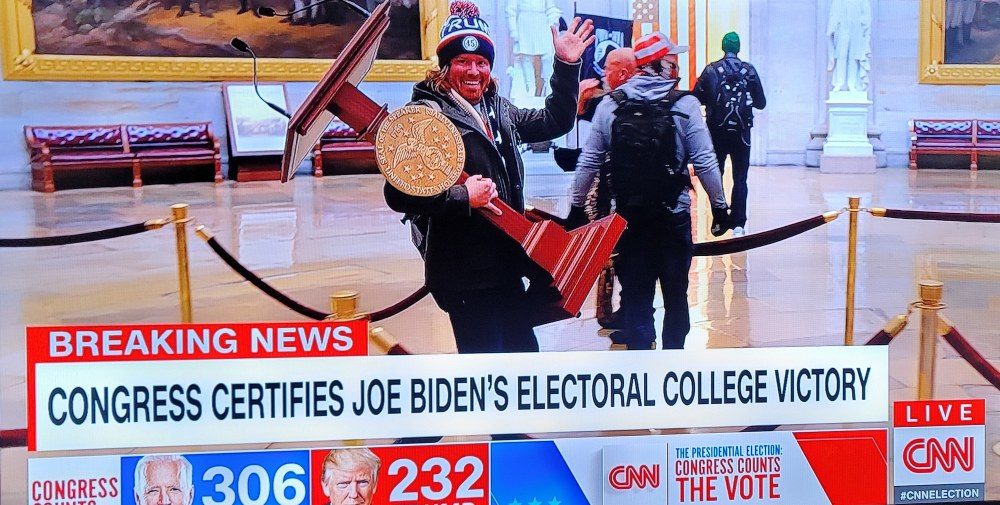 Can You Fire a Cop for Showing up at Trump’s Insurrection?

The FBI is still checking photographs to figure out who all broke into the Capitol on January 6, but a number of rioters who took and posted selfies have long since been ID’d.  (Is the self-identifying perp a coming thing for the 21st century, rather like the self-driving car?)  Some have already been fired.

Can you just fire an employee like that? Probably — but it depends largely on who you are.  In most cases, the law lets private employers fire people without many second thoughts, Elizabeth C. Tippett of the University of Oregon law school explained recently in theconversation.com. “Non-unionized workers in the United States – about 90% of all workers – are employed at-will,” Tioppett wrote.  “That means you can be terminated at any time, without notice, for any reason. It doesn’t even have to be a good reason. Unless the company has guaranteed your job in writing, or there is a specific law that protects your conduct – such as laws protecting union organizing or whistleblowing – your fate is up to them.”

If the employer is a police department or some other public agency, though, firing people because you don’t like what they say or do may be trickier.  It’s one thing to fire an employee who has committed a felony.  It’s quite another to fire one who has said – or demonstrated for – something that the current mainstream finds unacceptable.

The legal lines can get pretty blurry.

It didn’t seem all that blurry in the case of the two Rocky Mount, Virginia, officers who were fired after sending a selfie taken on January 6 while they were illegally inside the Capitol. Vermont’s attorney general evidently didn’t find it blurry when he called for firing a state trooper whose Facebook posts seemed to be cheering for the Capitol rioters.

And how does this blurry line look, closer to home?  At least two off-duty Seattle cops went to the Trump rally that preceded the riot – their photographs were right there on social media – and they’ve been placed on administrative leave while the city’s Office of Police Accountability (OPA) looks into what they actually did.  (At least four other Seattle P.D. officers, who haven’t been put on leave, were in D.C. at the time, though no one knows – or at least no one has talked about – what they were doing.)

“The Department fully supports all lawful expressions of First Amendment freedom of speech,” interim Seattle police chief Adrian Diaz said in a written statement, “but the violent mood and events that unfolded at the U.S. Capitol were unlawful and resulted in the death of another police officer.  … If any SPD officers were directly involved in the insurrection at the U.S. Capitol, I will immediately terminate them.”

“The fundamental question,” OPA director Andrew Myerberg said, “will be, ‘Is being present at the rally in and of itself a violation of department policy?’” Myerberg told the Times, “I just don’t know that yet. I think it really depends on what they did and what their role was in those events.”

“[N]one of the individual freedoms enshrined in the Bill of Rights come to us without limitations . . . ,” writes Andrew Cohen in an article published by the NYU law school’s Brennan Center for Justice on February 1.  “And in the case of police officers and the First Amendment, the limitations go even further when it comes to whether they can both express certain views and be cops. The Supreme Court has long held that public employees (like police officers) have narrower free speech rights than the rest of us in certain circumstances. In other words, as Holmes wrote in 1892 when he was on the Massachusetts Supreme Court, a cop has a constitutional right to talk politics but no constitutional right to be a cop.”

Cohen continues, “Off-duty officers had the right to go to Washington to take part in the Trump rally on January 6 . . . ,[b]ut the rest of us have the right, indeed the obligation, to evaluate what the exercise of that right by those cops says about their professional judgment, their temperament to be peace officers, and their commitment to upholding the law in the future based on the objective realities of the world. Some of these cops will lose their jobs because they took part in a Trump rally qua riot fueled by worthless “evidence” of election fraud and big lies.”

How do you draw the line?  In the Supreme Court’s 1968 Pickering decision, Justice Thurgood Marshall writing for the majority, described not a line, but a balancing act: “[I]t cannot be gainsaid that the State has interests as an employer in regulating the speech of its employees that differ significantly from those it possesses in connection with regulation of the speech of the citizenry in general,” Marshall wrote. “The problem in any case is to arrive at a balance between the interests of the [employee], as a citizen, in commenting upon matters of public concern and the interest of the State, as an employer, in promoting the efficiency of the public services it performs through its employees. “

But what really affects that ambiguous word, “efficiency?” Just last month, the Ninth Circuit reversed a district court decision granting summary judgment to the Las Vegas Metropolitan Police Department, which had fired a SWAT team sniper who had posted a Facebook message saying it was a shame that a man suspected of shooting a police officer didn’t have any holes in him.  The city believed the sniper had meant that an arresting officer should simply have shot the suspect.  The sniper claimed he meant that the officer who was killed should have shot him.

The lower court reasoned that under the Pickering “balancing test,” the police department’s interest in efficient operations trumped the sniper’s First Amendment rights.  If the public knew a SWAT team member had posted such a message, people might have less confidence in the sniper as a SWAT team member and if the sniper killed someone in the future, the department might get sued.

The Ninth Circuit majority didn’t buy any of this. The department “has provided no evidence to support its claim that [the sniper’s] comment will expose Metro to future legal liability. Metro speculates that if [the sniper] shoots someone in the future, the shooting will lead to a lawsuit, that [his] deleted Facebook comment would be discovered, that the trial judge would admit that Facebook comment as evidence, and that the jury would rely on the Facebook comment to find Metro liable. But Metro has cited no case in which such a long chain of speculative inferences tipped the Pickering balancing test in the government’s favor.”

Bottom line: The lower court “did not adequately address” what the sniper’s Facebook post actually meant when it weighed his First Amendment right against his former employer’s interest in workforce discipline.

Further, what about the case of “an officer who takes a negative view of the Black Lives Matter Movement”? Amaury Murgado, a retired Florida police lieutenant, writes in Police magazine.  “He posts what can be considered a derogatory comment on his Facebook page. He is called out by members of the public who complain to his agency about the post and he is labeled a racist. The agency handles the complaint and after due process, ends up firing him.”

Mugado then asks, “Was the officer just voicing his opinion as a citizen or was he causing harm to his ability to perform his duties in the field?” He continues, “That is the one question you must keep in mind before you open your mouth or post something on social media. Will my comments be perceived (perception is reality) as undermining my ability to do my job or negatively affect my agency’s ability to do theirs? If you don’t keep this in mind, you will have plenty of time to think about it after you turn in all your gear and start looking for a new job.”

And then there’s the laws affecting the military.  Last summer, Trump rallied to the confederate flag, saying “When people proudly had their Confederate flags they’re not talking about racism. They love their flag, it represents the South. They like the South … I say it’s freedom of many things, but it’s freedom of speech.” Right after, Secretary of Defense Mark Esper pointedly left the Stars and Bars off a brand-new list of flags that could be displayed on U.S. military bases.  Esper tweeted, “[w]ith this change in policy, we will further improve the morale, cohesion, and readiness of the force in defense of our great Nation,”

It will be interesting to see what happens to those Seattle cops.