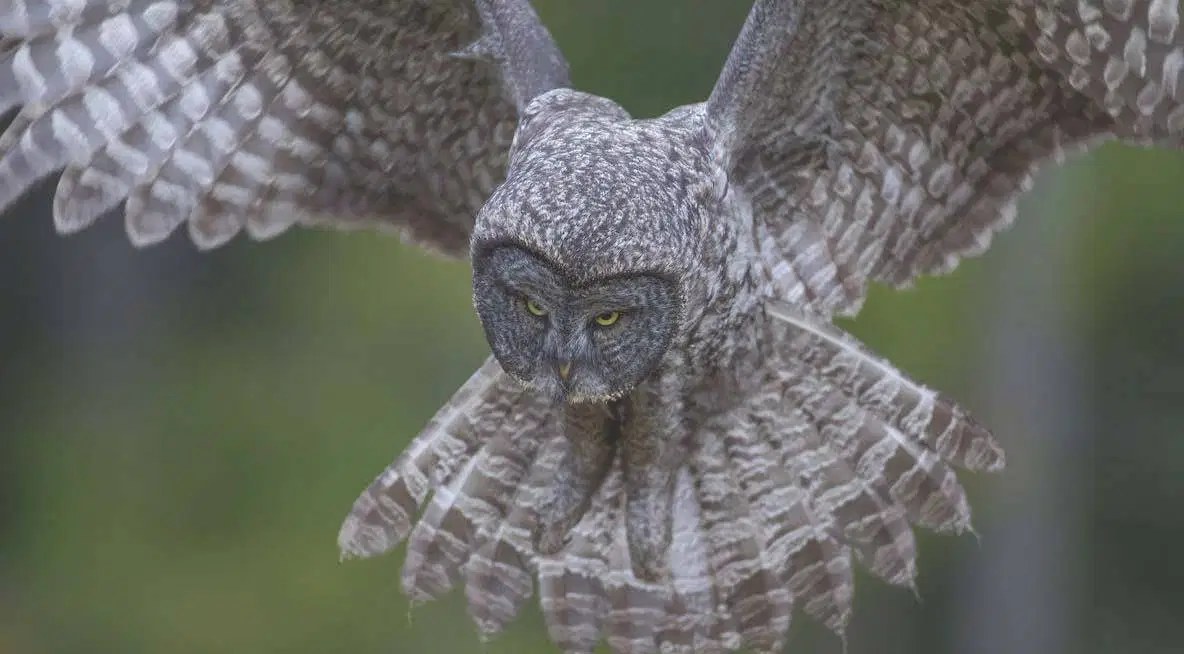 Stirring The Imagination: The Majestic Great Gray and Snowy Owls

The mudflats of Bowerman Basin, just outside Hoquiam, are a key stop on the Pacific Flyway and come noisily alive each May with hundreds of thousands of shorebirds.  The Basin is usually quiet during winter months, known mainly as a make-out spot for local teenagers, well fed from the neighboring Grizzly Den drive-in.

The exception is during a winter cold snap, when the Snowy Owl, largest of the species in North America, makes a majestic foray down to Grays Harbor .  The great raptors also visit such spots as Boundary Bay, Discovery Park and the Skagit flats.

Bannick is immersed in study of his subject.  He has produced unprecedented display pictures of Snowy Owl mating rituals.  He notes that while the Arctic looks flat to the untrained eye, “its ubiquitous contours are critical to the Snowy Owl’s survival. The owls nest on tundra locations that feature prominent raised sites, which are also useful for nesting and hunting.”

Great Gray Owls are nocturnal and inhabit boreal forests of North America and Eurasia.  Bannick long wondered how such a large owl could maneuver through dense stands of trees. “Although the Great Grey possesses a huge frame,” he writes, “it is composed mostly of soft, flexible feathers that easily bend if they come into contact with branches, allowing the owl to squeeze through narrow gaps.”

Over the past few years, Bannick’s greatest shot has graced the lobby of Snowy Owl Theater at the Sleeping Lady retreat outside Leavenworth.  (Bannick took retreat founder Harriet Bullitt and sister-in-law Tina Bullitt down to Bowerman Basin to watch the owls.)

The picture, printed for the first time, shows five Snowy Owls, doubtless arrived out of interior British Columbia via the Fraser River.  They are sitting on the shore of Boundary Bay, just over the border in B.C., with 10,778-foot Mount Baker as a majestic backdrop.  The mountain lives up to its native name roughly translated as the “Great White Watcher.”

“An indicator species is one whose presence and relative abundance assists in evaluating the health of an ecosystem,” Bannick writes.  “So understanding Great Gray Owls and preserving their habitat helps us protect a variety of other species, which in North America might include Boreal Owls, Northern Hawk Owls, Spotted Owls, Northern Goshawks, woodland caribou, elk, fishers, grizzly bears and lynx.”

The author’s worries for the Snowy Owl are more direct.  The Arctic is warming. Industrial depredations threaten the birds’ breeding habitat.  Breeding habitat is being pinched off by man, and “melted off” on both its northern and southern edges.  The owls nest on a very thin band of tundra between boreal forest and the Arctic Ocean. Climate change is melting the permafrost, allowing deep rooted plants to take hold further north, and eliminating lemming habitat.

Baby owls are fluffy, wide-eyes and irresistibly cute, as Bannick records in his nesting pictures.  A very different picture is provided when the great birds are plunging downward and dismembering prey.  A raven vs. Snowy Owl faceoff is one of Bannick’s best shots.

We will hopefully have a cold snap this winter.  It will be time to displace the smooching teenagers at Bowerman Basin – after a stop at Grizzly Den – or head for the Skagit, or the Reifel bird refuge near the mouth of the Fraser River.  We may still be banned from British Columbia, so will wait for Snowy Owls to come to us from the Great White North.

Buy Bannick’s books, pack your telephoto lens, and hope for a Snowy Owl shot with the Great White Watcher as backdrop.

Joel Connelly
I worked for Seattle Post-Intelligencer from 1973 until it ceased print publication in 2009, and SeattlePI.com from 2009 to 6/30/2020. During that time, I wrote about 9 presidential races, 11 Canadian and British Columbia elections‎, four doomed WPPSS nuclear plants, six Washington wilderness battles, creation of two national Monuments (Hanford Reach and San Juan Islands), a 104 million acre Alaska Lands Act, plus the Columbia Gorge National Scenic Area.
Previous article
I am Genius Hear Me Roar (So Why Didn’t I Win a MacArthur?)
Next article
Which Trump Books Should you Read?