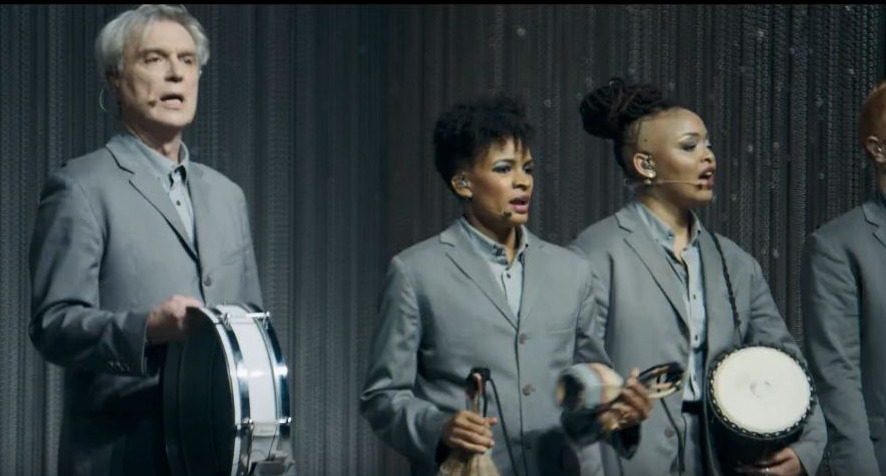 The Return of Byrne

Sometimes—rarely—the foaming chaos of the internet throws something up on the beach that seems like a message from the cosmos: “Pay attention. This is serious. I mean it.”

That’s how I felt when I discovered Jonathan Demme’s 1983 concert film Stop Making Sense lurking unpromoted among the show currently streaming on Amazon Prime Video, a day after learning that Spike Lee’s 2019 concert film David Byrne’s American Utopia was about to turn up on HBO.

The common factor between the two films is the prodigiously gifted Byrne, a self-taught musico-dramatic poet-artist-couturier polymath who first attracted notice as the lead singer of the pop quartet Talking Heads in 1977. He was 25.

He is now pushing 70. Many pop artists as they age try to hold their audience by reconfiguring their personae: Dylan, Bowie, Brian Eno are the great self-transformers. For nearly 50 years, Byrne has remained very much the same in thought, tone, and appearance: a twitchy, dead-pan puppet given to gnomic utterances that go off like little hand-grenades with a delayed-action pop in the listener’s brain. But his sameness is that of a baobab tree, growing more impressive and complex until it takes over the landscape.

More than a rock-show, it was a headlong carnival, more capacious and exciting and draining than any other stage act I’ve seen. Demme’s ever-wilder editing (four nights of performance boiled down to 90 delirious minutes) somehow achieves such concentration that I at least was grateful that the blessing of streaming let me take a break when I needed to.

It’s likely that many reading this piece were not among the audiences that made Stop Making Sense on of the most successful concert films of all time. I can only hope that they take advantage of the opportunity while it lasts. The film has not dated by a heartbeat’s length. In retrospect the year 1984 turned out pretty tame. Byrne’s fiery anthem “Life During Wartime” seems a lot more topical now than it did then, and the racial comradeship of the ensemble more inspiring.

I haven’t seen David Byrne’s American Utopia yet. Those who saw the show when it toured the US last year were uniformly ecstatic. Spike Lee used 11 cameras to capture two live performances of the 11-person show. From insider reports, the result challenges Demme’s masterpiece. Tom Connick of the British music webmag NME called it “the most ambitious and impressive live show of all time”, blurring the lines “between gig and theatre, poetry and dance.”

For longtime devotees of David Byrnes art, the title of the new show may seem a little anodyne, out of character for the mad monk of American music. I’m not worrying. I can’t reproduce the logo of the show using a normal keyboard. If I could, you would see that the word “Utopia” is upside down.

Stop Making Sense  is currently available without charge on
You-Tube. The version on Amazon Prime Video is subtitled.

Roger Downey
Born in Canada moved to Peru's altiplano at the age of six; came to the U.S. at 10 to discover that you don't use your feet to dribble the ball. Learned from the git-go that "America" is an idea, not a place.
Previous article
What It Was Like Being A Volunteer For A Coronavirus Test-Vaccine
Next article
Washingtonians are Highly Educated. So Why Don’t We Have the Colleges To Match?