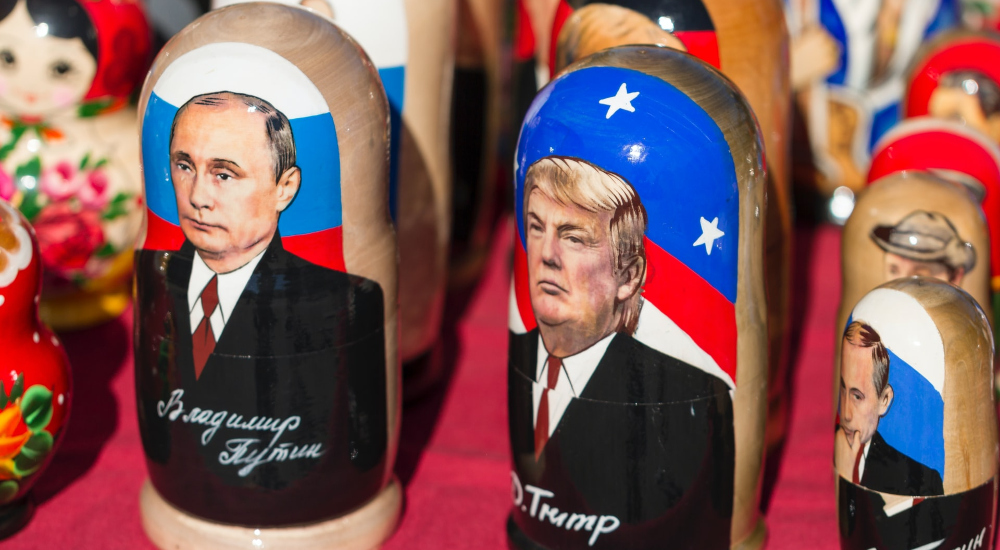 U.S. intelligence reports of Russian interference in the Nov. 3 presidential election are mounting as the critical vote approaches. As in 2016, President Donald Trump rejects those warnings.

Beyond the Kremlin’s goal of stoking political and social discord in the United States, Russian President Vladimir Putin has a larger objective in stealthily stumping for Trump — the breakup of NATO.

From his first months in the White House, Trump has disparaged the North Atlantic Treaty Organization that has kept the peace in Europe and North America since the end of World War II. He portrays his order to pull 12,000 U.S. troops from Germany as pressure to get Berlin to pay more for its collective defense. It also serves Putin’s No. 1 priority of sowing division within the 30-nation alliance and getting its troops off the borders of the former Soviet Union.

Trump has repeatedly asked himself, in public and out loud, why the United States should send troops to defend NATO member states if they were attacked, in particular the former Yugoslav republic of Montenegro and the Baltic states of  Estonia, Latvia and Lithuania. Is it coincidence that Trump raises doubts about the U.S. commitment to defend NATO member countries that Putin sees as having been poached from Russia’s “sphere of influence” by the West?

Putin has been following the same strategy in the Baltic states that allowed him in 2014 to seize Ukraine’s Crimean Peninsula and deploy Russian mercenaries to bolster ethnic Russian separatists in two key eastern provinces of Ukraine. The Crimea landgrab led to the European Union and the United States imposing sanctions on Russia — sanctions Trump has made clear he wants to lift and would likely do so in a second term.

Putin covets Estonia and Latvia for their warm-water ports and economic success in contrast with Russia’s dependence on volatile oil and gas markets. As he did in Ukraine, Putin portrays the ethnic Russians minorities that make up nearly a quarter of the populations in Estonia and Latvia as victims of discrimination by nationalist majorities. Launching an invasion to “rescue” the Russian minority in the Baltics would be a much more expensive operation, in casualties and international standing, if NATO stands by its foundational pledge to come to the aid of any member nation under attack.

Trump’s threat to withdraw thousands of U.S. troops from South Korea would also be a gift to Putin and his allies in China and North Korea. Trump engages in the same distorted logic of cutting defenses in Germany, accusing the South Koreans of taking advantage of the United States unless they boost the annual budget for the U.S. presence by $5 billion. U.S. armed forces have a commander-in-chief who fails to understand that defense is not a for-profit export and that forward-deployed troops enhance the security of the United States and its Asian-Pacific and NATO allies.

Another four years of Trump diverting billions from U.S. military construction projects to build a few miles of a Medieval wall along the Mexican border is also money well spent in the Kremlin’s view.

Putin must relish the revolving doors at the White House as Trump sabotages the careers of veteran diplomats and national security officials who tell the truth about his solicitation of foreign help with his re-election. He churns through defense secretaries, chiefs of staff and national security advisors, then trashes their reputations when they can no longer be complicit in his corrupt agenda.

FBI Director Christopher Wray echoed that warning at a congressional hearing on Thursday and specifically called out Trump’s claims that his re-election is at risk from ballot tampering by Democrats or hostile foreign powers.

“Americans must have confidence in our voting system and our election infrastructure,” Wray told the Senate Homeland Security Committee. “We are not going to tolerate foreign interference in our elections.”

Nearly 500 retired senior military officers and national security experts published an open letter to fellow citizens on Thursday condemning Trump’s inept coronavirus response, the economic catastrophe that resulted and what they termed “an assault on American values and institutions.”

“Thanks to his disdainful attitude and his failures, our allies no longer trust or respect us, and our enemies no longer fear us,” the National Security Leaders for Biden wrote. Many who signed the letter urging voters to elect the former vice president are alumni of previous Republican administrations.

In a normal political season, the avalanche of defections from a president who describes military veterans as “suckers” and “losers” would be enough to convince American voters of the need for change at the top. In 2020, amid the coinciding crises of pandemic, recession, social unrest and climate-fueled natural disasters, Americans have begun voting in an atmosphere of dread and distraction.

There remains much to do before Putin’s vision is realized of a United States wracked by toxic social divisions, dysfunctional government, weakened alliances and diminished stature in the world.

It will take another Trump victory in November for Putin to be able to declare: “Mission Accomplished.”

Carol J Williams
Carol J. Williams is a retired foreign correspondent with 30 years' reporting abroad for the Los Angeles Times and Associated Press. She has reported from more than 80 countries, with a focus on USSR/Russia and Eastern Europe.
Previous article
My Tea with RBG
Next article
Big Political Shifts in the Fight for Police Accountability