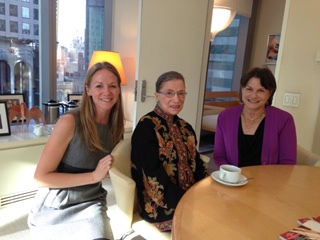 My Tea with RBG

Just shy of eight years ago, I found myself trying to make small talk with Justice Ruth Bader Ginsburg.

It was an unanticipated encounter. I had come up from Washington, D.C., to Glamour headquarters in New York for the magazine’s Women of the Year awards. I was talking with some colleagues when a harried assistant came up and asked if I could take care of Justice Ginsburg.

Ginsburg, who was being honored with a Lifetime Achievement award at the evening gala, arrived at the Condé Nast building that afternoon for a meeting with the editor in chief. When the magazine assistant said Cindi Leive was running late, I stepped into the breach and soon was joined by another top editor, Wendy Naugle.

What do you talk about when you unexpectedly find yourself sitting next to someone like Justice Ginsburg? Some reporters might have been tempted to discuss her rulings. I asked about the embroidered tunic she was wearing.

If you look at photos of the Justice at social and formal events, she often wore these beautiful tunics, embroidered or appliqued, some silk and some other materials. While renowned for her array of jabots and the fishnet gloves, she dressed well throughout her life. The creators of “On the Basis of Sex” made sure to capture her style.

The Justice appeared to enjoy answering my query. I am not sure if I recall correctly, but I think she said she found the tunics in Santa Fe where she regularly vacationed to attend its opera festival.

We also talked about opera and how she and the late Justice Antonin Scalia, her judicial polar opposite, shared that love and had both appeared as supernumeraries on the stage at the Kennedy Center.

As the Justice, my colleague and I continued to chat, I did something that I rarely have done as a journalist. I consider it inappropriate for reporters to ask for selfies or autographs of the people they cover. It crosses a line that makes me uncomfortable. But this was Justice Ginsburg. I was chatting with her, not doing an interview.

I asked if it was okay to get a quick picture of us all together. She graciously nodded and agreed.

I’m so glad now to have the photo and more importantly the memories. It also reminded me of the immense privilege I have enjoyed as a journalist.

As journalists we get access to icons like Justice Ginsburg and to ordinary people doing extraordinary things who are willing to open their homes and hearts to share their stories. We get to talk to people we would never meet in our own worlds because it is our job. We get press badges that allow us to walk behind police lines at parades and demonstrations.

Being a reporter often means having a front row seat to history – from war zones to ball games. We get to go behind doors closed to the general public because we are meant to be their eyes and ears. It’s a privilege that carries the expectation of getting the best available facts to share with the public. It’s a privilege because an informed electorate is vital to democracy.

Thomas Jefferson said: “Our liberty depends on the freedom of the press, and that cannot be limited without being lost.” And the Washington Post official slogan reminds us: “Democracy dies in darkness.”

Sadly, things seem to be getting darker. I used to think that wearing a press badge was a protection that enabled reporters and photographers access to go where they needed to report a story. But in recent months, press ID has been turning journalists into targets. They have been injured while covering protests and arrested for doing their job. This targeting of journalists by federal agents is now in the federal courts.

If a case touching on these issues should ever reach the high court, the death of Ruth Bader Ginsburg will make a difference. We have a lost a champion of a free press. We also have lost a gracious and warm woman who was willing to schmooze like girlfriends with an awestruck reporter.