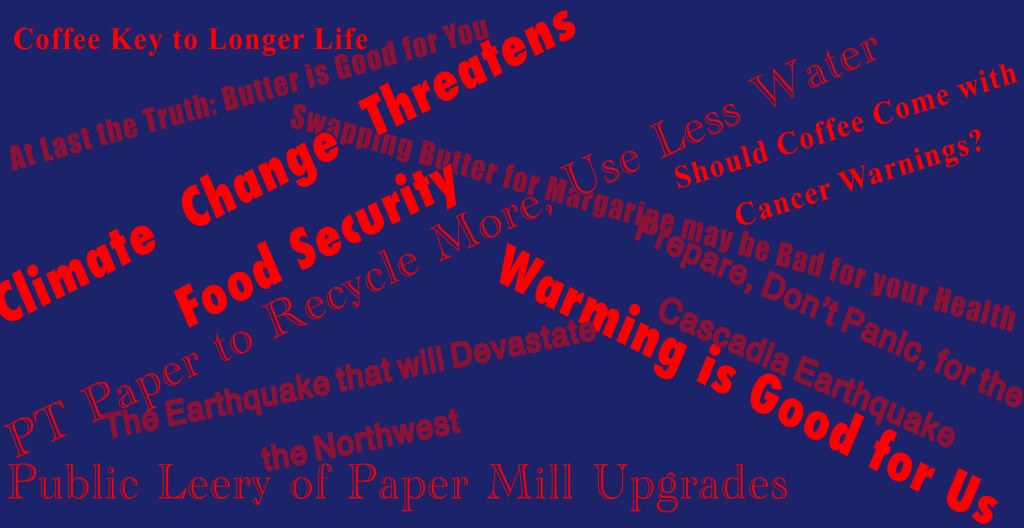 Do we have a Problem with How we Report on Science?

Recently, a sea-grizzled, Pulitzer-award winning journalist asked me if I thought the print media did a good job of science reporting.  I thought about this for a long time. The content of science-based articles published in independent media by well-meaning journalists, in my opinion, often do a fine job of reporting science.  Well-written pieces report results while also capturing nuance, contradictory research, and other caveats necessary to report science accurately.  As an example, recently the Seattle Times won the AAAS (American Association for the Advancement of Science) Gold Medal science journalism award for their series of articles on Orcas.

Science does not make good copy.  Science journals are rife with cautious and tedious phrases like “the data suggest” and “within error.”  Conclusions are often tentatively drawn, and regularly suggest further study.  Without publicly-funded science, however, science communication is like all others: they compete for attention against an onslaught of easily-accessible media. As a result, headlines about science, or in the digital vernacular, “clickbait,” are often misleading or even inaccurate.

Commonly headlines scream results that invalidate the adage of “correlation does not imply causality.”  If a study finds an association between two things, it does not mean one thing caused the other to happen.  This is especially true with health-related news.  For example, there was a study conducted in the UK where researchers found a slightly lower risk of death over 10 years of follow-up among people who self-reported that they drink coffee.  National headlines ranged from “Drink up, coffee is good for you” (NBC News); “Coffee drinkers are more likely to live longer” (NPR); and “Go ahead and have another cup” (AP).  The source study does not suggest that coffee was definitively the reason for increased longevity, only that coffee drinking can be part of a healthy diet.

In 2015, many of us on the Olympic Peninsula were spooked by a New Yorker article called “The Really Big One” about an impending earthquake. One could argue that scare tactics work: earthquake preparedness has increased in the northwest since that article was published. Recently a similar article was published with a clickbait headline: “A Massive Earthquake is Coming to Cascadia – And It Can’t Be Stopped!” After following the headline link, it was followed by smaller print: “But it can be anticipated and mitigated.”  The headline encourages the reader to pause and peruse; the contents educate.

There are differences between the elements of journalism and the scientific method.  The first journalistic element is the “obligation to tell the truth.”  Journalists strive for “truth” whereas science is a plodding march towards increasing accuracy.  Two scientific studies can result in different outcomes, depending on the experimental design, the method of analysis, or, sometimes, bias of the researcher. The kerfuffle over mask-wearing this past spring is a dramatic case in point. As noted by Dr. David Kriebel, a professor of epidemiology, the problem of different outcomes from COVID-related studies is driven by the urgency for the outcome.  “Usually science is self-correcting, given enough time. But currently there is not enough time for science to self-correct when it’s being used to craft public health policy… that’s a problem for policy makers over-relying on ‘capital S’ science to justify decisions.”

Professional journalists (not opinion writers) and scientists both strive to limit bias; focus on verification of information, and value a personal sense of ethics and responsibility. Both seek to communicate clearly to their audience.  There is a subset of the scientific community that promotes including effective media communication as part of the scientific curriculum. A sea-grizzled marine science colleague, a popular lecturer often requiring the audience to stand and sing with him, taught me that scientists should think of themselves first as entertainers. He understood that without the ability to engage an audience, even the most important science will have limited impact.

There are others, however, that feel that marketing science demeans the field at best, or encourages the spread of false information in the extreme. An oceanography joke about Robert Ballard, an oceanographer and underwater explorer best known for finding the Titanic, is a snarky example of this perspective.  As told by skeptical (or jealous) colleagues: “What is the most dangerous place at sea?  Getting between Bob Ballard and a camera.”

In the end, so what if there is no such scientific term as a “king tide.”  Or if all of the various super-blue-harvest-blood moon terms are pure marketing hype. As long as the information behind the blazing headline is relatively accurate, and prompts someone to investigate and learn a little more, perhaps there is more good than harm.

As more scientists are called upon by public policy officials on topics critical to the human race, it is important that people, whether scientists or journalists, responsibly report the latest in scientific research. There is an equal responsibility for citizens to read beyond headlines, using critical thinking, with patience and understanding for the slow but diligent process of science.

Peggy Myre
Peggy Myre is founder and president of Exa Data & Mapping, a local company providing marine environmental data management and visualization services to national and international clients.
Previous article
Everything You Need to Know about How a COVID Vaccine will Happen
Next article
Dazed And Displaced: Portland’s Reckoning